Welcome to what will hopefully be a regular column where I can bring you the latest rules related information from WizKids. Over the coming weeks I hope to be able to go in depth on rules issues that can use a better understanding by the general community as well as covering series of Q&As that come up through the HeroclixRules@gmail.com account as well as various forums.

Since being named Rules Arbitrator (again) I’ve spent the last couple of weeks gathering up a series of questions that have needed to be addressed during the “gap”. This included a fair number of questions related to the last 2 releases (Arkham Asylum and Hammer of Thor) as well as a few other things here and there.

In future columns, I’d like to take advantage of the audience this site affords me to cover issues like “why does that power work like that” or “can I use this power with that power”. This column is a great opportunity for you to get a full discussion about a rules issue that’s important to you. Please feel free to email column ideas to me at HeroclixRules@gmail.com. Now, let’s jump right in with the Q&A:

While it’s not the category we’re at all proud of, these things do happen. From a rules perspective, though, they are relatively easy to deal with – we update the Player’s Guide with the appropriate errata. If you ever come across a situation like this and you don’t happen to have the guide with you, the rule of thumb is “go with the figure.” In fact, you’ll see in all of the situations below, the final decision is to go with the figure. 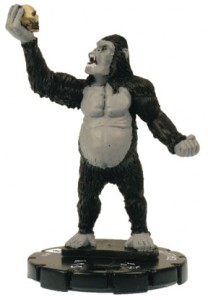 #104 Grodd – this figure does not have the Calculator team ability, even though it appears on his card.

#010 M-11 – this figure is not unique, his rarity now properly shows as Veteran in the HoT Gallery.

#044 Air-Walker – this characters is a veteran (as per their figure), even though the character card has a silver (unique) background.

#051 Odin – this characters is a veteran (as per their figure), even though the character card has a silver (unique) background.

Some things need to be tweaked just a little in order for the pieces to be played like they were originally envisioned during design. When that happens, we alter the rule text as needed.

#009 Pip the Troll – the special power Space Gem begins as follows: “Pip the Troll can use Phasing/Teleport. He can use it normally, or if he is not using the Carry ability, you can instead place him in any square…” By changing the wording from “move” to “place” we address a number of questions that came up regarding this power. By saying “place” it is more apparent that he does not need to roll break away (even though he is using Phasing/Teleport and does not need to roll break away). Also, because it is not a movement, it’s more clear that Pip cannot pick up objects nor does he need to figure out “how” he is moving to the target square. 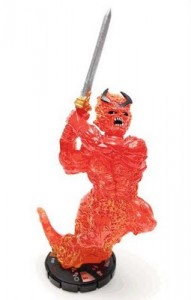 #015 Fire Demon – the special power, March To Ragnarok!, begins as follows: “When a friendly character named Surtur or Ragnarok Surtur is within 8 squares…” thus making the Buy it by the Brick figure more fun than ever!

#026 Pluto – the special power, Soul Syphon, reads as follows: “When a friendly character with 30 or higher point value is KO’d, Pluto may be placed in the square they occupied after any current actions are resolved. If Pluto does, he can immediately use Regeneration as a free action.” By changing the wording from “move” to “place” we address a number of questions that came up regarding this power. By saying “place” it is more apparent that he does not need to roll break away and by adding the word “immediately” the power is clear that this special power is the rare exception that allows Pluto to be given an action even on the opponent’s turn.

#105 Thor, The Reigning – the special power Odinsleep is marked “(non-optional)” – otherwise, the power would miss the entire point.

Outside of corrections, lots of different questions come in on a variety of topics.

In short, nothing is allowed to cause a character to occupy in a square of blocking terrain. Therefore, Element Lad’s use of Transmute here would result in nothing changing. 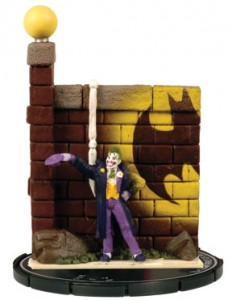 #061 Clown Prince of Crime – Can this figure be carried? All of his combat icons make it legitimate, but the 2×2 base makes it seem like he really should not be allowed to be carried.

Clown Prince can be carried. Out of date rulebooks do indicate that figures with a larger base cannot be carried, but that is no longer true in the current rulebook.

#F002 Lunge – can a character pick up an object while he is moving the 2 squares via Lunge?

The friendly character Valkyrie carries still needs to be a legal character to be carried. So no fliers, giants, duo figures, etc.

#021 Ulik – What happens when Ulik is hit with Pulse Wave, Psychic Blast, or Exploit Weakness?

Pulse Wave is the easy one, so let’s take care of that first. The crux of Pulse Wave is the fact that it ignores powers (and traits, and abilities, but I digress). The word “ignore” is a key part of that power. Ulik’s Strongest of All Rock Trolls (SART) specifically says that it cannot be ignored (using that very word) so Pulse Wave would not ignore Ulik’s defensive special power.

#024 Namora – Can Namora be carries since her trait gives her the  speed symbol?

Namora’s printed speed symbol is the  which is not replaced by the trait, it is added to. Characters with the  symbol cannot be carried, so Namora will have to get there on her own. 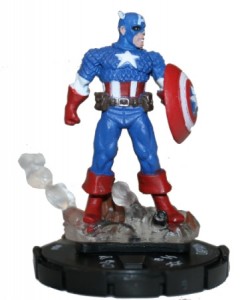 #040 Captain America – His special power Deflection Trajectory seems pretty clear about what Cap can target. But what if my character gets equipped with a feat like Camouflage or Submerged. Would those be effective at preventing Cap from drawing a line of fire to my character?

Look, when Captain America throws his mighty shield all those who chose to oppose his shield will yield. It’s as simple as that. Seriously though, Cap’s special power is very explicit in stating what it is that blocks his line of fire – a wall or indoor blocking terrain. Though Camouflage activates for a character when it is adjacent to a wall, it is not the wall preventing the line of fire. And Submerged is activated off of water terrain – that’s neither a wall nor is it indoor blocking terrain. So neither of these feats would prevent Captain America’s line of fire. There’s no denying he is an incredibly effective attacker, but many online have talked about their methods of dealing with him. What’s yours?

#047 Nico Minoru – since she can use any standard power by using her Staff of One, can she be assigned a feat like Vampirism that has Blades/Claws/Fangs as a prerequisite?

In the current rulebook, as long as the character is able to use a standard power, even if it is through a special power, it qualifies to be assigned the feat. Now, it can only use the feat when it can use the power, but so long as Nico has the power (through whatever means at her disposal) she can utilize the feat. Will this capability be in the next rulebook? It’s probably worth checking.

#050 Hela – When a figure is being brought back through her Touch of Life special power, what click would the KO’d character be on to start the healing? My figure was on his last click of life and it was hit for 2 damage – so does he need at least a “2” on the d6 roll to be un-KO’d?

As soon as the KO symbols appear, it is time to stop clicking. Assuming you are going to heal the character, treat the first click with KO symbols as click “0”. A roll of one would heal you up one (to the last click of life).

#BF100 Legendary Day – what is this battlefield condition referring to when it says “Abilities cannot be countered”? I tried to outwit my opponent’s Super Senses, but my judge told me that it was nto an ability.

Your judge was right. Powers and Abilities are two separate things in Heroclix. Powers are represented by those colored squares (or bordered boxes for special powers) on the characters dial. Abilities can be team abilities but are also those things your character can do through its combat icons (like Carry or Indomitable). While it is not widely realized, outwit allows you to counter both powers and abilities (though team abilities are protected). So this battlefield conditions protects abilities from being countered.

This week may seem a bit dry with just a few clarifications to some of the new pieces (or relatively new in the case of the Arkham Asylum figs). I hope the updated Player’s Guide is helpful. Remember to email HeroclixRules@gmail.com with any questions on gameplay or things you’d like to see addressed in this column. We might not be able to write every column requested, but we will get an answer to everyone who sends in a question.

Here are some handy reference materials