So many things in Heroclix depend on drawing a line of fire, I thought it would be a good idea to review the basics of this crucial aspect of the game. At its most basic level, a line of fire is what one character needs to be able to be sure it can “see” another character on the map.

One of the biggest challenges with determining a line of fire is determining which squares in between the two ends of the line are affecting it. A line that runs horizontal, vertical, or on a perfect diagonal, it is pretty easy. But once you “step off” that perfect straight line – that’s when the arguments start and the small strings come out to measure things up. I sincerely doubt that anything I teach in a single online column is going get anyone past this – in fact, my standard “clix kit” in my car includes a ID holder as a portable line of fire tool – but there are some tricks I can impart that might lessen your need to spend time arguing.

The first thing I do when I’m dealing with a line of fire question is to find the midpoint. There is a rectangle between the two points of the line and it is so many boxes wide and so many boxes high. Finding the midpoint will often make the conclusion obvious. Take the diagram below. 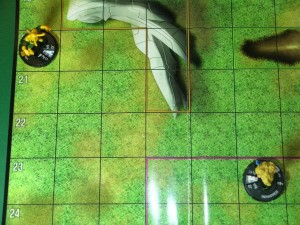 Loki felt pretty safe, thinking he was hiding behind the safety of the wall. But by finding the midpoint – without even needing a string – we can see how this line of fire is actually clear. First, let’s establish the size of the rectangle between them. 4 boxes across and 2 boxes high. That means the mid point is 2 boxes right and 1 box down from Loki (or 2 boxes left and 1 box up from Enchantress – it being the midpoint, it should be the same). See the diagram below. 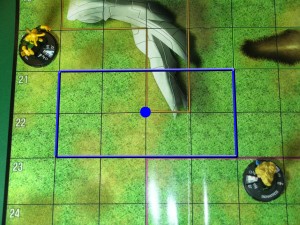 Even numbers makes this pretty easy, but the system works for odd numbers too. If Enchantress had been positioned a little closer, that wall would have been much more useful to Loki. Take the diagram below. 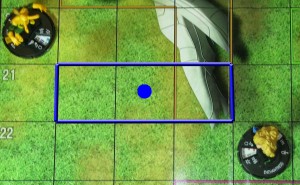 Now the rectangle between them is only 3 squares wide and 1 square across. That puts the midpoint as 1½ squares across and ½ square down. Those ½ squares aren’t unsettling – they just mean that instead of seeing the midpoint at an intersection, we’re going to see it in the middle of a square.

Once we find the midpoint it is pretty clear that Enchantress can’t draw a line of fire to it, so in this scenario, Loki is safe (for now).

Next week, we’ll look at lines of fire and discuss how terrain and characters can get in the way.

CHALLENGE
I was particularly pleased to see the positive response to this part of the feature. Had I know how well received it was going to be, I would have been more careful to make sure to thank Jerome (Munchoboy) Gonyeau. As I was on the road and away from home, he was quick to respond to my shout out for some photographic assistance. Here is last weeks solution: 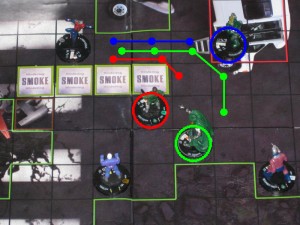 CHALLENGE #1 SOLUTION – Following the blue path, Spider-Girl can charge to attack Psycho-Man. Although he’s on elevated terrain, since she has Leap/Climb, she can treat him as adjacent when she is given a close combat action. Following the green path, Spider-Girl can charge Dr. Doom. She has to avoid the square where the red path ends or she would be adjacent to Kristoff. During the movement portion of Charge, she cannot ignore characters or terrain with her Leap/Climb power since she has not been given a move action. Finally, Kristoff is a legitimate target as she can move along the red path.

Spider-Girl cannot reach Magus because the only ways to get to him require ignoring hindering terrain or characters during the move, something she cannot do during Charge as it requires a power action, not a move action. She also can’t reach the Doombot because the only path that allows her to get adjacent to him would require she move adjacent to an opposing character. And as we all know by this point, she has been given a power action and that part of Leap/Climb does not activate.

This weeks challenge is a set up for next week’s article. At least one of the lines of fire depend on finding the midpoint like we talked about today though. Thor (in the blue circle) has gotten himself into a bit of a bind. Various grounded enemies surround him. While Thor stands on the edge of elevated terrain, determine which of these characters he can draw a line of fire to. For each character, the description may (or may not) impact whether or not he can draw a line of fire. 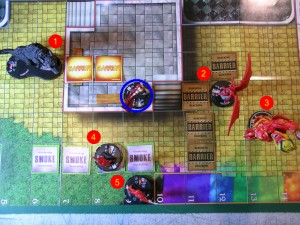 (1) Fenris Wolf – the double-base giant
(2) a Fire Demon, hiding behind a barrier
(3) the giant Surtur, also behind the barrier
(4) a Rock Troll, standing in a square of hindering terrain and
(5) a Hand Ninja on a Stealth click with a Smoke Cloud between him and Thor.

Which characters can Thor draw a line of fire to? Which of them would get a defense bump from the hindering terrain?