Normal Distribution – Lines of Fire Part II: I Can See You From Here

There is actually quite a bit to cover this week. First up, there are links at the end of the article to the latest Player’s Guide. Once again, there is a Restricted and Unrestricted version so that you can keep your documentation as current (and low page count) as you wish. For those not familiar with how these documents are set up, a brief run down. The Unrestricted version is the most complete guide to playing Heroclix available. It contains every errata and clarification that is deemed necessary for understanding the game outside the rulebook itself. The Guide is divided into two major parts. The first part covers the rulings and updates themselves. Very little text is duplicated from the original materials (like the Powers and Abilities card, Feat cards, character cards, etc.). The original goal with the guide was to have a “one stop shop” for any Heroclix material you needed to look up. That’s where part two comes in – it contains the most accurate updated version of any game element text. If nothing has been changed (or updated with a new release of a card), it’s there just like it appears on the game element. If there has been a change, then it is included in what you see. You could print out just Part 1 and have everything you need to understand all the nuances. Part 2 is about having the most current wording available in an easy-to-find layout.

Elevated Lines of Fire Core Concept – When drawing a line of fire between an elevated and grounded character, the only single square of elevated terrain that the line of fire can travel through is the one the elevated character occupies. 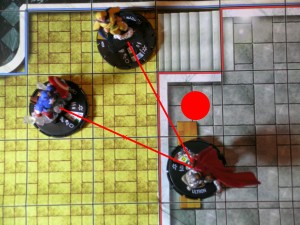 Since no one complained too much about last week’s math, I’m going to bring a little bit of math into this lesson, too. There are two important 45 degree angles at work here to help you visualize where Ultron can draw a line of fire to. 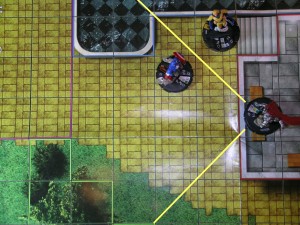 Look carefully at the diagram above. As Ultron’s lines of fire extend along the perfect diagonals away from his square, everything inside those 2 lines are squares he has the potential to draw a line of fire to (terrain will play a factor to this). Anything outside the “cone” is going to cross one of the elevated squares Ultron does not occupy and therefore would be blocked.

LINES OF FIRE BETWEEN ELEVATED AND GROUNDED

There are four kinds of game elements that can affect your line of fire. Remember that we are specifically talking about lines of fire between an elevated character and a grounded character. All of these things can behave differently if the line of fire is between 2 characters at the same elevation.

character in it, it remains clear. These characters do not block an elevated/grounded line of fire.
2 –

LINES OF FIRE AT THE SAME ELEVATION

characters – if the line of fire crosses one of these, then it is blocked. Take a look at this scenario: 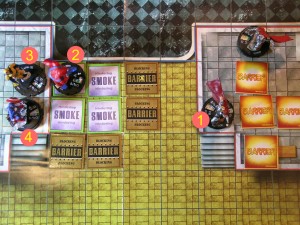 Ultron seems to have a lot of targets from his current position, but let’s look at them one at a time.

1 – Thor – the line of fire to Thor is blocked. Both figures are elevated and there is a square of elevated blocking terrain between them.

3 – Sentry – Ultron can not draw a line of fire to Sentry as Giant-Man blocks it. A grounded

Since we bring up Giants, it’s worth it to talk a little bit about how lines of fire with them behave… a bit differently. As much confusion that there is about them, I think you’ll find it’s a lot easier once you review it in one fell swoop. There are 2 key rules in the Giant Size ability, both quoted below.

symbol do not block lines of fire to or from this character. This character and a character on elevated terrain draw line of fire and make ranged combat attacks against each other as if they were both elevated, but terrain effects still apply normally.”

characters – Nothing really changes here. These characters were going to be ignored anyway.
2 –

Remember that line of fire Ultron drew to Giant-Man? Well, now you understand why it was good to go. The grounded blocking terrain does not affect the line of fire between the elevated Ultron and the Giant-Man who has the line of fire drawn to him as if he were elevated. It is worth pointing out, though, that since he is standing in hindering terrain, he still gets a +1 to his defense if Ultron decides to attack him.

There is a fifth type – the

characters – but those are few and far between and we can cover those next week in a short wrap-up.

I’m hopeful that this week’s article helps people understand the rules for line of fire, especially how they interact with different elevations and Giants. But if the last few days of response has demonstrated anything, it’s that we can make things easier for people by providing a good reference tool. Take a look at the Line of Fire Assistant PDF.

Given what we’ve discussed, let’s take a look at last week’s challenge. The target that generated the most discussion was Fenris Wolf. As a double-base figure, Thor can try to draw a line of fire to either square. However, when you look at those lines of fire, you can see that the midpoint of each line crosses the square of elevated blocking terrain. 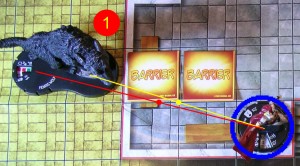 Fenris Wolf is a

As for our other targets, in the image below, green lines indicate clear lines of fire and red lines stop at the point where they get blocked. 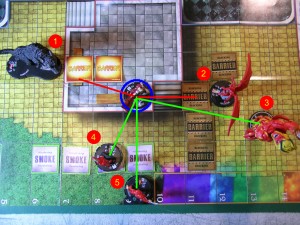 The Rock Troll is occupying hindering terrain so while Thor can easily draw a line of fire to him, the Rock Troll will get a bump to his defense because of his location.

Finally, the grounded Hand Ninja who though he was so smart didn’t realize that Thor’s line of fire from elevated terrain isn’t affected by grounded hindering terrain unless he occupies the square. So Hand Ninja’s Stealth doesn’t activate and Thor can target him as well.

This week, poor Iron Man is facing off against the hordes of Asgard. Iron Man is on his starting click with Speed: 10/Running Shot, Attack:11/Energy Explosion, Defense:18/Invulnerability and Damage:4/Extremis (Iron Man can use Outwit and Perplex. When Iron Man is not using Outwit, he can use Super Senses). All of the opposing figures are on their starting clicks as well, conveniently standing in alphabetical order: (back row) Enchantress, Fire Demon, Hela, Karnilla, Loki, (front row) Malekith, Rock Troll, and Valkyrie. Iron Man’s first instinct was to perplex up his damage to 5 and take a shot at Loki, who is the highest point character on the board. But an attack is available for significantly more damage. 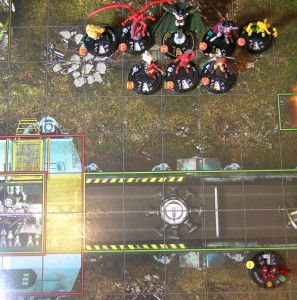 The challenge for this week is to enable Iron Man to make an attack that is most likely to cause the most amount of damage to be taken. What should Iron Man do this turn? Hint: He may be making more than one action.