You’ve probably gotten the sense that I like teasing information out (hint: if I’m posting photos of my desk…). But no teases today – I’ve got a figure from DC HeroClix The Brave and The Bold for you! With no further ado… 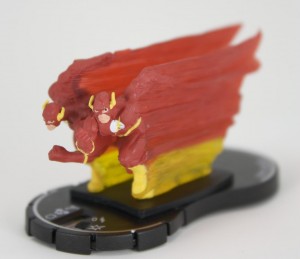 Time and again, The Flash has proven why he is called The Fastest Man Alive. The only thing which can keep pace with The Flash when he’s running full-speed is…The . When Barry Allen and Wally West tap directly into the Speed Force and the barriers between times and dimensions shatter. Together, The Flashes have faced the resurgent Anti-Monitor,  Darkseid or the deadly new Zoom.  The Flashes are the fastest figure in HeroClix, and (like most new duo figures) they come with two amazing special powers.

First, The Flashes accelerate to 14 speed and start circling the globe several times a second.  How fast is that?

You can place them anywhere on the map that’s adjacent to an enemy, make and attack, and then move them and make another attack against someone completely on the other side of the map!  Now that’s a Flash-worthy power! 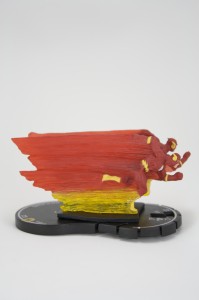 They both have to have a clear shot, so both parts of their “peanut” base has to be adjacent to the opponent and completely in clear terrain.  So there are ways you can avoid The Flashes showing up out of nowhere and disappearing just as fast.  But that’s not even the most impressive special power on their dial. As they accelerate throughout their dial, they go faster, and faster and faster, beyond mortal ken, until on their final click they hit 21 speed (a new record for HeroClix ) and go:

Once they leave the map and enter into the Speed Force itself, as a parting shot to help their friends they can alter time and space, go into the past and re-arrange EVERYTHING on the map to your liking.  (Well, within some gameplay limits.  Colossal Spectre and Anti-Monitor don’t like to be moved without their say so.)

Oh, they have a kickin’ dial and card, too: 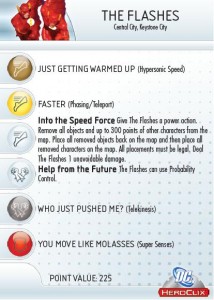 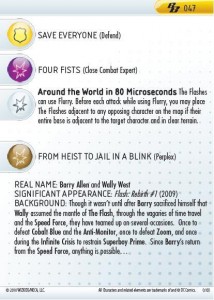 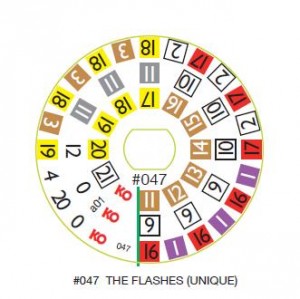