I have a bat on my desk that worries my co-workers. It’s not because they’re afraid of me using it on them. It’s because when I realize I’ve made an error and I need to figure out how to fix it, I find my brain works better if it has a little… pressure. So I’ll hold the small bat in one hand and whack it rhythmically against my skull (which makes an interesting hollow sound, no jokes, please). Folks seem to worry that this will cause me pain or concussions or something, but I just shake my head and explain that punishing my brain is the only way it’s really going to learn to do better, isn’t it?

Last week, I published a Line of Fire Chart that was not quite correct. Considering how much time I put into it, reminding myself that folks were going to print it and use it and therefore, accuracy is so important, I was dismayed to realize that there were a few boxes incorrect on it. In short, last week’s chart indicates that the LOF between a grounded character and an elevated character would be clear when it crossed a square with a grounded

. This is inaccurate. The

would block the line of fire. An updated chart is in the resource section below, my apologies are extended, and the bump on my head should prevent this from happening in the future.

If I had to choose one feat that leads to players asking questions, Lunge would easily be in my top 5. Maneuver and Vault would probably make the top 20. Put them all together, play them on one figure, and you’ll probably spend half of your game explaining to your opponent just how things work. Feel free to bring this article with you so you only have to explain things once.

On the face of each, these feats seem simple enough. As with all things the devil is in the details, so in the quotes below, key phrases are underlined.

Lunge: When the character is given an action, but immediately before it makes a close combat attack, it can break away automatically and move up to 2 squares.

Maneuver: Choose a character. When the character makes a close combat attack against a single target opposing character, after the attack is resolved, put the target in any unoccupied square adjacent to the character.

Vault: Choose a character. After the character resolves a close combat action, it may be placed in any square in which it may legally be placed adjacent to a target of the action at the same elevation as the target.

In a typical attack, the sequence would work like this:

But as you start using different powers, especially combos available through special powers, things get a little… weird. The key is to remember the 3 different times that each feat activates and ask yourself which applies at each step of the action.

For Lunge, we ask “Is the character about to be able to make a close combat attack?” If the answer is yes, then Lunge can be used.

Finally, for Vault we ask “Did a close combat action resolve?” This is generally pretty easy to tell since it’s when you are applying a token to your character. Again, nothing in Vault indicates that the attack even needs to succeed, it just needs to have happened.

Let’s take a look at Fandral whose special power lets him use Flurry and Leap/Climb.  He and Beta Ray Bill are facing off against the Kingpin and a couple of Hand Ninjas. In their current setup, Beta Ray Bill has no targets, so Fandral is going to do some fancy footwork to set Beta Ray Bill up. 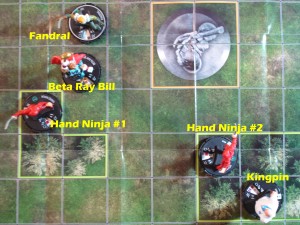 We start by giving Fandral a close combat action to activate Flurry. We ask ourselves the three questions and at this point, none of the feats can be used. 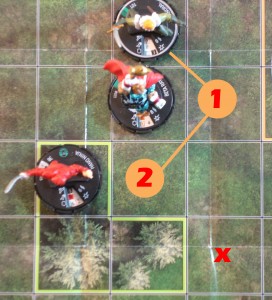 After the 2 squares of movement with Lunge occur, Fandral must now make his close combat attack targeting Hand Ninja #1. After the attack roll and application of damage (if it is successful), then an attack would be resolved. If that’s the case, then Fandral gets to reposition the target character to another adjacent square, so he pulls the Ninja out of the comfort of hindering terrain and into the square that’s marked with a red X. Vault does not activate yet because Fandral’s close combat action has not been resolved – we still have another free action to go.

When we give Fandral the second free action, he is able to Lunge again since this action also contains a close combat attack. He positions himself next to Hand Ninja #2, not bothering with breaking away from Hand Ninja #1 since Lunge says the character ignores break away for this purpose. 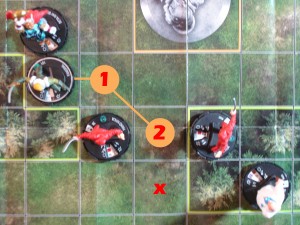 Again, Fandral will use Maneuver after the attack has been made to reposition the Hand Ninja into the square with the red X (denying Kingpin a likely recipient for damage dealt to him, thanks to his use of Mastermind). At this point, both free actions are complete, so Fandral’s close combat action resolves. Finally, the Vault feat gets to activate and Fandral can now get out of Beta Ray Bill’s way, repositioning himself behind the 2 Hand Ninjas.

For the player’s next turn, Beta Ray Bill now has lots of options. He can target Hand Ninja #1 or Kingpin directly or he can use his Running Shot if he really wants to target Hand Ninja #2. Fandral has changed the character positions in the board enough so that Beta Ray doesn’t need to worry about having to break away, nor is anyone at risk that the Hand Ninjas can use their special power to make a free close combat attack (since they are not occupying hindering terrain). 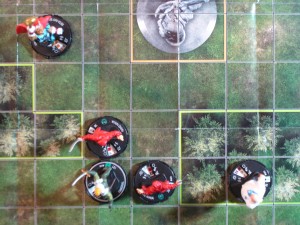 For some extra fun, you should take a look at the Secret Invasion Elektra human version (#048a). She has a special power that allows her to use Charge, Leap/Climb, and Flurry. With that combo she can do the same thing that Fandral did in our example, but she can move half her speed first.

This challenge was pretty straight forward. In order to maximize the damage that gets taken, the first thing Iron Man should do is to outwit Valkyrie’s Toughness. Next, he should use Perplex on himself in order to increase his attack value.  Finally, he will use Running Shot with Energy Explosion. There is one square of elevated terrain he can get to that will allow him to target Hela and the Rock Troll. These 2 characters are unique in that they each have 5 other opposing characters surrounding them. If his roll is high enough, he will hit all of the characters with Orange and Yellow dots. Each of those dots represents a click of damage either from being the target of Energy Explosion of from the “splash” damage from being adjacent to that target. That’s 6 figures, each taking 2 clicks each, for a total of 12 clicks of damage.

This may not be the best move if Iron Man is the last piece on the board. But assuming there is an equivalent number of Avengers off the board, ready to step in, Tony will be softening up a lot of characters before looking for a medic. In this attack alone, Iron Man will be taking 2 clicks of damage thanks to Malekith and Hela both being Mystics. 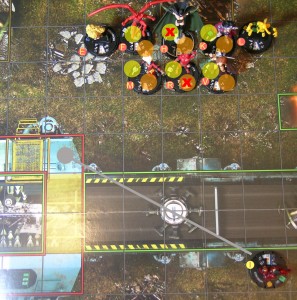 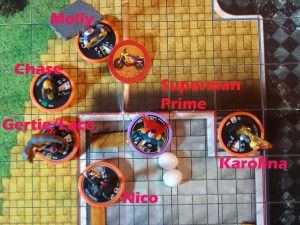 And since the picture obscures just about everyone’s dial, these are the clicks the figures are on: 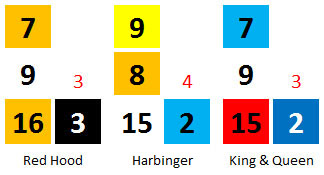 The Red Hood finds himself taking down King and Queen, but the mysterious Harbinger is on hand to help the members of the Royal Flush Gang. The Red Hood’s goal is to damage somebody and it doesn’t matter to who it is. The opposing team has a number of things that can affect this attack. King & Queen are using Super Senses and Shape Change. Harbinger can use Probability Control and also gets +1 to her defense thanks to the hindering terrain.

The one thing going his way is the fact that Red Hood has Outwit. What should he counter and who should he target in order to assure himself the best odds at a successful attack?

Bonus Question – If Harbinger’s defense was modified by +1 (say, she had been perplexed by an off-camera teammate), how would that change your answer, if at all?