“WizKids is very excited to add Watchmen to the HeroClix platform,” said WizKids/NECA president Lax Chandra. “Watchmen is a groundbreaking movie which redefines the way costumed vigilantes are portrayed on the big screen. With 25 unique sculpts in the Collector’s Boxed Set, plus the colossal Dr. 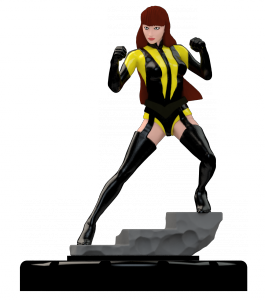 Manhattan figure, we’ve got a comprehensive offering that will satisfy both avid gamers and Watchmen movie fans.”

“This continues our long and valued relationship with Warner Bros. Consumer Products and DC Comics, and we look forward to another successful collaboration,” states Joel Weinshanker, president of NECA.

HeroClix pioneered the collectible miniature category and HeroClix has been the leading collectible game in the comic genre due to its innovative game platform and deep collection of characters.

A wholly owned subsidiary of the National Entertainment Collectibles Association Inc. (NECA) , WizKids/NECA is a New Jersey-based game developer and publisher dedicated to creating games driven by imagination. The HeroClix brand is the most successful collectible miniatures games on the market today, with over 250 million miniature game figures sold worldwide. For additional information, visit www.wizkidsgames.com.

Warner Bros. Consumer Products is a division of Warner Bros., an AOL Time Warner Company, and is one of the leading licensing and retail merchandising organizations in the world.

DC Comics, a Warner Bros. Entertainment Company, is the largest English-language publisher of comics in the world and home to such iconic characters as Superman, Batman, Wonder Woman and the Sandman. These DC Super Heroes and others have starred in comic books, movies, television series (both animated and live-action) and cyberspace, thrilling audiences of all ages for generations.  DC Comics’ Web site is located at www.dccomics.com.

WATCHMEN and all related characters and elements are trademarks of and © DC Comics.
(s10)