DC HeroClix The Brave and The Bold previews continue with a real powerhouse: Power Girl!

After many false revelations and years of confusion,

Power Girl has finally learned her true origins: she is the Supergirl of Earth Two, a survivor of the first Crisis. Blessed with all the strengths and some of the limitations of Kryptonians from that universe, Power Girl’s independence and impulsiveness led to problems in earlier years. Recently, she has comfortably settled into the Justice Society, becoming its first chairwoman. After disappearing for a time to help Supergirl in the city of Kandor, she has now re-adopted her civilian identity of Karen Starr and is trying to restart her software company.

HeroClix fans are among the most comics-savvy people on the planet, and they know that among the key abilities all Kryptonians share are the ability to Lift And Toss Very Heavy Things and the ability to Hit Other Things With Lots Of Oomph. So when our fans saw the preview of Power Girl I posted on Friday, they realized something was missing – Super Strength. Good catch HeroClix fans!

Power Girl originally was playtested with a trait which reads “Power Girl can use Super Strength” – but that line was unintentionally edited out when we created the print master for the art team to lay out the cards. Thanks to the miracle of Print and Play, you can play her the way the design team intended. Power’s corrected cards are below, and are officially considered legal for all HeroClix play. 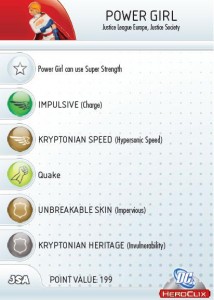 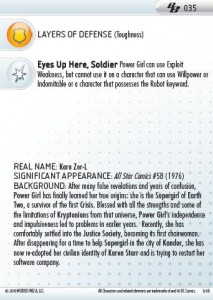 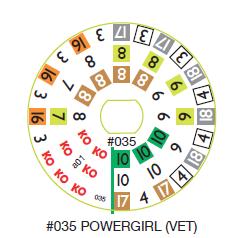