Back to the Front! Plus, a Sneak Preview!

My name is Jake Theis, and I am here to talk ‘Clix.

Over the past two years, I’ve lived and breathed HeroClix, creating new releases and promoting a beloved game around the globe.  I have the extraordinary fortune to work on a game that has a rabid core of fans that have passionate ideas on well… everything.  Since joining WizKids, I have built great friendships throughout the HeroClix community and across the game industry.  I value the input and suggestions of our fans and you can rest assured that we are always listening.

Recently, I helped with the transition of WizKids to its new owners at NECA, and thanks to NECA’s flexibility, I remain based out of Seattle, partnering with a group of folks that we affectionately call “WizKids West.”  I have operated primarily under the radar over the past few months, developing new products that will release over the coming months and years.

Justin, Drew, and Norm have done a fantastic job providing you with news, insights, and previews.  My goal is to open up the Brand Development team, and show you, the player, all the cool things that we are working on or have completed.  We’ve been up to our ears in dials and character cards, but with the convention season approaching and DC HeroClix: Brave & The Bold ready to preview, it’s a great time for show and tell.

First, though, I want to build a time machine, and take us back to the summer of 2008.  *WHOOOSH* Alright, everyone still with me?  Good.

I joined WizKids in March 2008 (exactly two years ago), but in the summer of that year, I was commissioned with building a Brand Development team that consolidated the departments of R&D and Brand.  Hammer of Thor was the first HeroClix set to be designed and developed using this team-based approach.  We incorporated many different opinions into the set’s design, and I am particularly proud of the success that Hammer has enjoyed.  Thanks to everyone for checking out the release!

One of my goals with Hammer of Thor (and with HeroClix) was to deliver surprises to fans and have collectors think about their collections in new ways.  With a couple thousand figures in the HeroClix universe, it is important to keep the game fresh and exciting without ratcheting up complexity.

With Hammer of Thor, we debuted a few new game mechanics (always exciting) and philosophies with the hope of getting people to approach force-building in new ways, while keeping rules “creep” at a minimum.   When working on a licensed game, it’s perhaps most important to make sure the existing intellectual property syncs up neatly with the mechanics of the game.  With a licensed comic book property and with comic book fans, it is especially critical.  My favorite of our new mechanics in Hammer was what we called in playtesting- “Army Building.”  You know it as “Minion.”

The “Minion” mechanic grew directly and organically out of the Thor-universe.  The 1970s and ‘80s runs of Mighty Thor feature the Thunder God squaring off time-and-again against insurmountably large forces of fantastic creatures and monsters.  Invariably, these armies are commanded by big, nasty “generals,” who Thor ultimately smashes after pulverizing his way through their ranks.  To offset the high-point, “godly” figs mandatory in a Thor-themed set, we decided to incorporate army building mechanically.  As designers, we thought it important to give players the option of playing huge, godly figs or swarms of figures balanced to take out one-man (or woman) forces.  (There will be more on this topic in a second).

Additionally, the minion mechanic makes the common slot of a booster release much more intriguing.  There is a definite value to having both high-profile, iconic characters at common, as well as non-unique figures that players will want a bunch of copies of for army creation.  Also, it’s a lot of fun for Thor to Charge into a group of Rock Trolls, then Quake them to pieces, just like the comics.

I can’t leave you today without letting you guys peak behind the curtain at least once.

Today’s preview piece comes straight out of DC HeroClix: Brave & The Bold.  Earlier I said that in Hammer, we wanted to provide more options beyond the godly Asgardians.  Well, to balance the awesome, heroic duos found in B&B, we thought it was important to also provide some force-building options.

The army building/Minion mechanic found in Hammer was very well received during our testing and early discussions, so we included some more options for it in B&B.  In the coming weeks, we’ll take a look at some of those characters.  Additionally, we wanted to make sure that there were higher-point, powerful individual figures that could stand toe-to-toe with the heroic team-ups.  We included a group of exciting, powerful villains in Brave & The Bold to fulfill this task.  Luckily for us, the DC Universe is loaded with monstrous baddies that can give any team a run for its money.

Today’s preview fig was “built” for this opportunity.  I give you the cyborg-

Ready to trade blows with Superman and his friends, Metallo starts off with a bang (and a dangerous Kryptonite Core)- Charge, Poison, Super Strength, and Impervious are complimented by an opening click of five damage.  After trading killer blows in the early game, the devious Metallo can Rebuild (Steal Energy), all while using his Malleability to tie-up (and carve up) opponents.  All-in-all, he provides a great threat for heroic duos at just 182 points.  His fighting skills are sure to warm even a metallic heart.  I hope you have as much fun with him as we have. 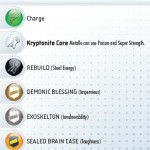 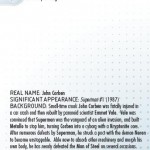 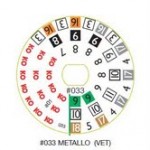 Well, it’s great to be back, and showing off all of our cool new toys.

P.S. It’s great to be officially back!