Everyone needs an Alter-Ego!

Editor’s Note: Due to technical difficulties, this article is running a little later than usual.  Thanks for your patience!

Welcome back to my second preview article for DC HeroClix: Brave & The Bold.

First, thanks to everyone for the great messages and kind words!  It amazed me to hear from so many different people over the past week that it warms my cold Kryptonite heart (wait, wasn’t Metallo’s preview last week?).  If you ever want to say hi or comment on my random musings, please feel free to find me on FaceBook.  The number one message that I received was “Welcome Back!”  Though, following in close second was, “please preview the following Brave & The Bold figures and mechanics…”  I take both as nice compliments.

The mechanic that I was asked about most debuts in this very set- Alter Ego.

As I type this article, ESPNEWS is droning on in the background, replaying the same sports scores on a reel just visible in my peripheral vision.  Hilariously, an extremely relevant commercial featuring Orlando Magic hoops star Dwight Howard (nicknamed Superman) has been on heavy replay along with the scores.

It’s amazing to me how powerful a storytelling device the alter ego is.  Alter egos allow the reader to place themselves in the shoes (or usually boots) of the hero.  They give the character strands of humanity that make us identify with them.

Superman is an orphaned alien that hurtles through the sky, swats away pesky bullets, tosses tanks like sacks of flour, and can heat vision a supervillain into a neat little pile o’ atoms.

In stark contrast, Clark Kent is a bespectacled “mild-mannered reporter” in a cheap suit struggling to hit deadlines (I can sympathize) with on-again-off-again romances hampered by his secret life.

Both of the characters that I mentioned above are pretty compelling.  Also, they are the same person, which makes the story incredibly captivating.  The story is so interesting, that variations of it have existed in print for more than 70 years.

Since the creation of the Brand Development team, I have tasked our designers to come up with a flavorful, yet easy to understand execution of Alter Egos that would allow us to bring these characters to game tables near you.  In the approaching-a-decade-history of HeroClix, we had never released a standard, non-costumed Bruce Wayne.  The opportunity seemed to good to pass up.

Here are the ground rules we started with:

1)       The Alter Ego must be a compelling character on its own. I wanted iconic, interesting figures that have separate lives that are explored in detail.  Just because a character has an alter ego, does not mean that the character should be represented using the Alter Ego mechanic.  The character also should have abilities or character strengths as their civilian version.

2)       Alter Egos should have the ability to “transform” into their costumed identities. As I mentioned in last week’s article, I wanted players to think about their collections in new ways when a set is released.  A Bruce Wayne that has the ability to see the Bat Signal and put on the cape and cowl is great for our superhero combat simulation.  I think we found an elegant and balanced solution to how to incorporate these characters in game form.

3)       The characters, if possible, should be available at lower rarities to ease collection of linked pieces. With the interchangeability of the pieces, the potency of the characters’ brands, and iconic nature of both the costumed heroes and their other halves, we wanted to find homes for our Alter Ego figures at low rarities.  With B&B having Duos figures at the higher rarity levels, Alter Ego was a natural fit for the set.  If you have Diana Prince, we want you to find Wonder Woman, and complete the two-figure set.

4)       The sculpt concept should indicate that the figure is in the process of transformation. I greatly enjoy characters that tell subtle stories through their sculpts.

Well without further hubbub, let’s get to show-and-tell. 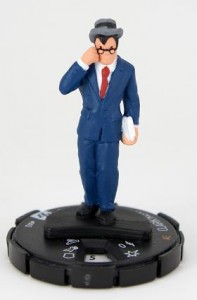 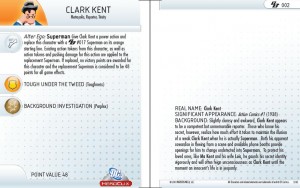 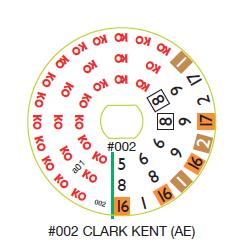 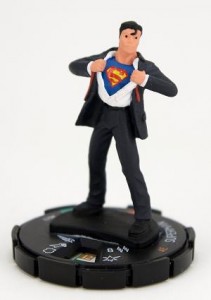 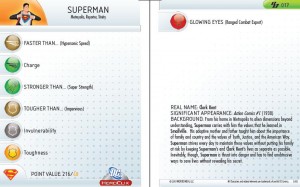 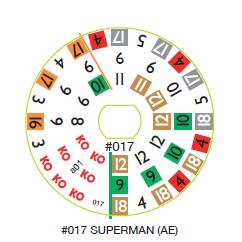 The use of alternate starting lines has been explored previously in HeroClix with characters like the Sentinel and Starro the Conqueror.  With the advent of special powers, the idea was proposed to me of tracking metamorphosis (or in this case, Alter Ego change), by having one character evolve into another at pre-determined points in the dial that would be marked by alternate color “start” lines.  I loved the idea, and we began to experiment with it.  Because the alternate start lines have different valuations, we also could calibrate the value of transforming into the point cost of figures, enabling better balancing.

I am proud that our playtesting bore out that some playtesters had tough choices on whether to switch Alter Ego characters into their costumed versions.  I love the decision of either holding onto the Perplexing Clark Kent or switching into the more tank-like Superman.  The duality of that choice was exactly what we were shooting for.  Players have to decide if they will switch into their costumed forms, or risk being KOed while still hiding their secret identities from the opposing force.

We’ll talk further about Alter Ego and its effects in-game over the coming weeks.  I hope you like it as much as we do.

Special Bonus Section: By now, you’ve heard about Clark Kent/Superman, Diana Prince/Wonder Woman and Bruce Wayne/Batman.  There is another Alter Ego character combo in The Brave and The Bold which fits the criteria I laid out above and will please even the most hardcore DC fan.  Any quick guesses as to our fourth selection?