Thanks to the positive response we’ve received about our Alter Egos and “including more figures from your collection” in your games, we’re proud to unveil the new format that all HeroClix games will be required to use from now on (both casually and in tournaments). A picture is worth a thousand words, so here’s an illustration of one player all set up to play.

That’s right, in every game you’ll get to use so much more of your collection.  And if you don’t have a big enough collection to fill up your half of the map, you are legally obligated to go buy some more HeroClix as soon as possible!

Can you imagine?  Superman with 7 Batmans with 19 Wonder Womans with a World’s Finest with 161 Street Thugs vs. 192 Checkmate guys?  The possibilities for team-building are truly endless!

So far our office champion in this new format is the person who’s made his opponent concede the fastest, since no game has actually finished.  But that just means that you have to play more HeroClix, and that’s win-win for everybody!

Maps: All HeroClix games must be played on new or revised maps. New and revised maps have the purple starting area 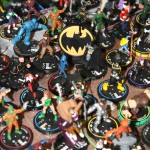 extended to encompass one full half of the map for each player. Other terrain types which fall within the purple boundary also retain their existing terrain type, for example Hindering Terrain inside the purple boundary is still Hindering Terrain.
Figure Setup: A player is required to fill every non-Blocking Terrain space inside their starting area with Clix figures. Peanut and 2×2 base figures fill 2 and 4 spaces, respectively. You may not place a peanut or 2×2 base so that part of the figure in on elevated terrain and part is not. Come on, you’ve played Tetris, you can do this.
Legal Figures: Mega-Mega Crossover replaces any previous Modern or Golden Age rules.  Players may only uses figures with the Colossal damage symbol if both players agree beforehand (WizKids will always agree to allow Colossals – we have infinite Fing Fang Fooms – so please don’t ask us over and over again when you play us).
Point Totals: When you’re playing with this many figs, who cares about point totals?
Feats, Objects, Battlefield Conditions and Event Dials: Please. Who are we kidding here?
Theme Teams: If you can field a Theme Team and meet all the other rules, go to town.
First Turn Immunity: If you don’t hit someone on your first turn, you’re doing something wrong.
Win Condition: Have the last figure in play, or be the last person to walk away in frustration.

UPDATE: In order to kick start Mega-Mega Crossover games, here is a revised map for the format for you to Print and Play: Mega-Mega Fort Map

How are we going to enforce all casual games being played in this format?  Well, why don’t you try playing in a different format.  No, go ahead.  Just ignore those sounds outside your window.  That scream?  Probably the wind.