Three Parademons Walk into a Bar…

Last Friday, I previewed one example of our new execution of REV which featured Damian Wayne using two different identities.  Today, rather than focusing on two versions of one character, my Brave & The Bold sneak peak features  different, thematically related characters that allow for a variety of new force-building options.

* Quick note- To get larger versions of the pics below, please click on them.  I’m learning the ins-and-outs of our new-ish WordPress client, so please be merciful as I learn how to add in cool bells and whistles to posts.  Thanks!

Before we dive into the pics, I have to confess that I am huge fan of Apokalips and the Jack-Kirby New Gods storylines.  Darkseid, his minions, and his enemies stand out to me as a compelling mythology that spans the DC Universe.  When we compiled potential characters to include for the ‘Minion’ mechanic in Brave & The Bold, Parademons, the rank-and-file of Apokalips, seemed like a natural fit.  Having no version of them in HeroClix since Cosmic Justice, they were long-overdue for a triumphant return. 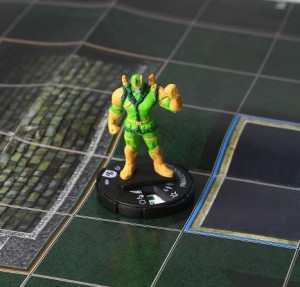 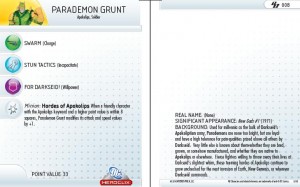 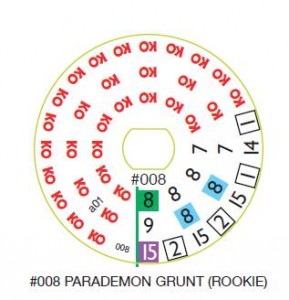 While incorporating the literally grunt-level Parademons into the set, we were split on whether to include a handful of Apokalips characters directly into Brave & The Bold or leave the Parademons simply as pieces that interact with past sets (like Lashina from Arkham Asylum).  We ultimately decided to split the difference and include a Parademon officer to help amp up army building, while still leaving the Apokalips cast as grist for a future set (maybe as a powerful counterbalance in a Superman-themed set?).  For the Parademon Sergeant, I especially like the “Darkseid’s Motivational Techniques” power that was submitted by our R&D team.  It’s flavorful and adds an interesting tension to the game. 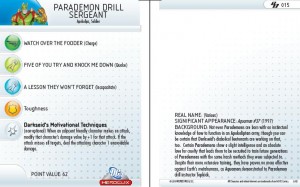 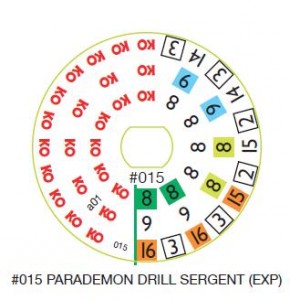 In addition to the awesome army of Apokalips, many HeroClix fans have asked us to continue building the Secret Six.  I really admire Gail Simone’s innovative work with the Six (and Birds of Prey, too!), and when we knew that the minion Parademon Grunt would be included in the set, it was natural to add “The Parademon” using our new version of REV.  With “The Parademon,” there’s another great, flavorful example of a special power with “Motherbox Detonation.” 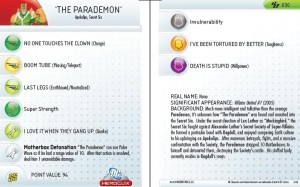 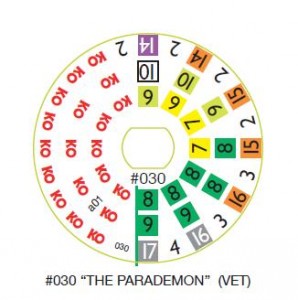 All in all, the Parademons provide three dynamic takes using the new twist on REV.  Brave & The Bold features quite a few interesting experiments, and I’m curious to see what players respond to and what interests people going forward.  With Hammer of Thor, we tried a variety of new ideas, garnering some definite hits that we plan to continue  in future sets.  We’re keenly interested to hear your feedback following the release of B&B.  Each set is like a mosaic tile that allows us continue the great, growing vision of what HeroClix is.  Will the picture ever be complete?

Well, with the amount of awesome new content that our licensors release (Blackest Night, anyone?), I think not.  We’ll certainly continue to show off classic figures from comics history and also showcase interesting new characters as they debut.