Alright, we have a second scoop of news to dole out today, so I’m going with an additional post to keep the information more manageable.

Store owners (and their HeroClix players) that pre-ordered DC HeroClix: The Brave & The Bold have started to receive our awesome Retailer Preview Kits that support the booster release (all stores which preordered before their distributors cut-off date should receive their kits on or before 4/14).  Like The Brave & The Bold boosters, we’re trying something new and exciting with our OP kits.  With Hammer of Thor, we released items, such as the mighty Mjolnir, to support the set, and given its success, we’ve expanded the amount of 3-D sculpted items that we want to feature in ‘Clix.  And just what items did we think you wanted most? 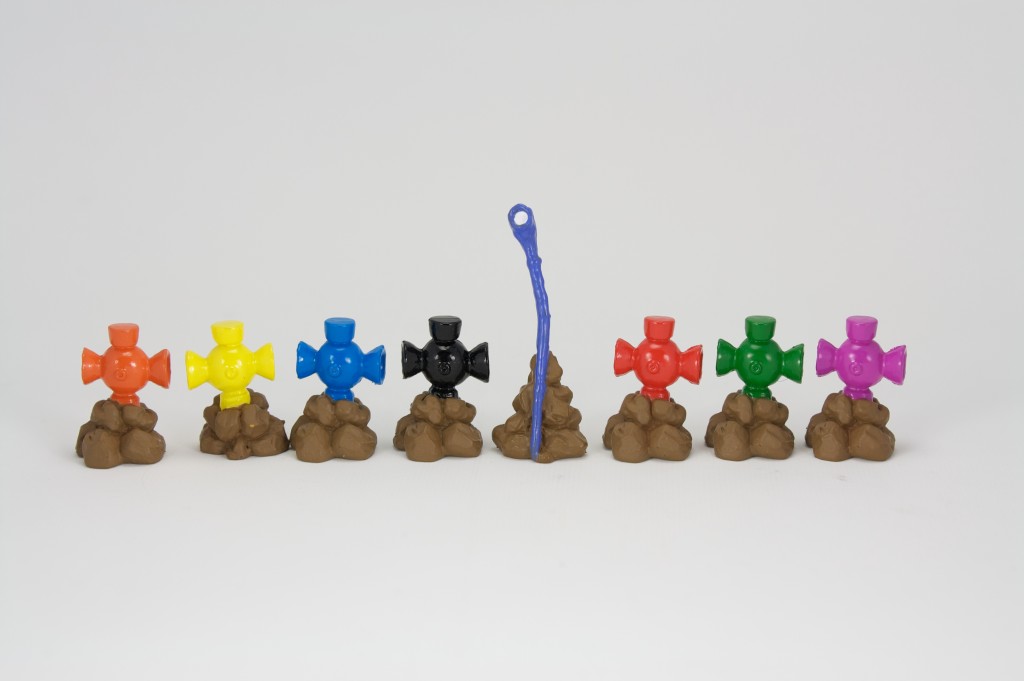 That’s right, Lanterns are coming to a map near you!

With the success and rising popularity of Blackest Night (both the storyline and the upcoming HeroClix Starter Game), we had an opportunity to hustle and create Lanterns for our summer OP programs.  Each lantern has its own flavor and unique game abilities.

Here’s a look at the Black Lantern (click on the card to enlarge): 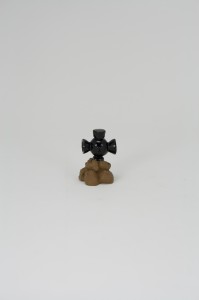 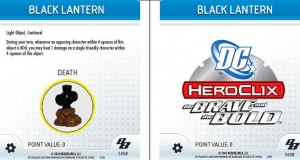 I love the unique flavor of the lantern, truly ringing home that, “the darkness grows as all light dies.”  The lanterns are sure to bring quite a bit of spice and variety to your games, and we hope that they continue to blaze the exciting path of 3-D objects in HeroClix.

Astute readers may have noticed a change on this object.  Points!  Yes, some special objects now have a point cost associated with them that should help further balance force-building and gameplay.  This change begins with the all-new 2010 HeroClix Rulebook.

There are two rules changes with the new rulebook involving objects:

1) Special Objects now have a point value.  Many will continue to be zero points (including your standard-light and standard-heavy objects), but some will have a point-value associated with them.  How does this work?  Pretty much like you’d expect.
-Objects (including standard objects) are now a part of your force, and you write them down on your force build sheet.
-When one of your objects is removed from the map (an opponent destroyed it, you used it in an attack, etc), in a two-player game, your opponent gets those points towards their victory.
-When one of your objects is removed from the map, in a multiplayer game, the person whose turn it is gets the points.  If it’s your turn, the points are divided between all opponents, rounding up.

2) Choosing Special Objects for a game has changed. There is no longer an “object pile”.  Each player simply brings up-to-three objects to the game.  The only restriction is this: one of them must be a light object, one of them must be a heavy object, and the third can be anything – light, heavy, or immobile.  Any or all of them can be Special Objects.  To recap, you can bring 0, 1 or 2 objects.  Random object distribution is now factored out as well.  You place your objects now as they are part of your force.  In a tournament, you have to use the same objects each round.  We’ll explain this change further as our previews for DC HeroClix: Blackest Night and its associated 2010 HeroClix Rulebook build over the next few weeks.

So in effect, this has been a preview inside of a preview…

Finally, I have some exciting news for those going to Chicago for C2E2.  Retailers attending C2E2 (the Chicago Comic and Entertainment Expo) are in for a special treat.  I can’t say what we’re giving away, but we only have a limited amount and we’re happy to reward our awesome, creative retailers.  If you’re NOT a retailer, you should bug your store owner to bring back some goodies for show-and-tell.

Have a great weekend (and make sure to throw some dice),