I’m so excited that this article is finally going up, I almost don’t know where to start. Helping to shape the HeroClix rulebook for the DC HeroClix Blackest Night Starter Game was one of the first things I was asked to participate in when I was asked to put the Rules Arbitrator hat back on. The goals were simple. Change as little as possible except where we could make the game simpler or more intuitive to learn and play. Almost everything I describe below falls into that broad umbrella.

There are a few new things one can see reviewing the 2010 HeroClix Core Rulebook. Some of them are not necessarily new ideas as much as they are a common understanding, now being formalized as a rule.

Click Numbers: As has been mentioned in earlier previews, starting with Blackest Night, figures are going to be printed with small red numbers that indicate what click you are on.

Rule of Occupancy: Many powers (e.g., Leap/Climb, Phasing) were written with specific language to state that the character could not stop or be placed such that they occupy blocking terrain. As part of our goal was to simplify and scale back the amount of text necessary for the Powers and Abilities Card, it made sense to formalize this as a rule. So it’s a global rule now, you can’t stop in blocking terrain no matter what.

Rule of Action Tokens: This is another one of those things that every game effect that deals with tokens needed to mention. If the action taking place was going to somehow result in a character having three (or more) tokens assigned, then the action couldn’t be done. Instead of having special powers that talk about “where the target has zero or one action tokens…”, we now have a simple rule that states “if the target can have more tokens than they should, you can’t do it.”

Locked Values: This is probably one of my favorite new ideas to come out with Blackest Night.  There are times in HeroClix where we force a combat value to change and, for that effect, it can’t be modified further. With the 2010 Rulebook, we introduce a term for this called a “Locked Value.” A locked value cannot be replaced and cannot be modified. It is used in a number of powers on the PAC and is an exciting new tool in the design team’s arsenal.

If we had to describe the different kinds of questions that show up learning HeroClix, it’s the oddity of certain interactions. Things behave one way in most cases, but in this one case, it behaves another way. As much as we could, we tried to smooth out these kind of rough edges.

Knock Back: To be honest, this was the first thing on my list when I was asked “what would you simplify.” When knock back occurs on a straight line, nothing has changed. When the line of fire is not on a “perfect diagonal” the attacking player can now choose from 2 directions. Which directions? Simple. Extend the line of fire between the attacker and the target. The first 2 squares that line hits are the two possible choices you have.

The other simplification for knock back comes from the way it works when a character s knocked back off elevated terrain. If the first square of grounded terrain is unoccupied, there is no change – a non-flier will be dealt 2 damage and a flying character will ignore it. But when that space is occupied, and the knocked back character remains on elevated terrain, well, no damage is dealt. You will no longer have to explain to your new player “well, he isn’t knocked off the building, but he is kind of knocked off the building, so he’s hanging on and pulls himself back up and… yeah, that all leads to him getting one more damage.” 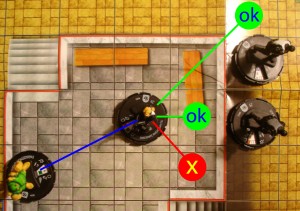 Starting Areas: We’ve had an odd rule in HeroClix that armies that were too big for the starting area of the map had to downsize. Literally. This rule is revised so that starting areas expand in order to meet the size requirements of the teams that are present. To be fair, both sides expand identically, so if your army needs an extra row, then my army gets an extra row as well.

Penetrating Damage: With this rulebook, penetrating damage ignores all damage reducers. It doesn’t matter what the source of the reduction. Previously, only reducers that came from powers and abilities were ignored. Feats and Battlefield Conditions were able to alter penetrating damage. Now, it’s easy to remember. If it says “reduces damage dealt”, it doesn’t affect this.

Destroying Walls: As with the knock back direction, the wording we’ve had for destroying walls has led to some strange possible situations. In the current rulebook, you need to draw a line of fire to each side of the wall and the wall does not block the line of fire. The rule does not require that the line of fire actually goes through the wall. So in the diagram below, we demonstrate this oddity with Metallo on the left – he can destroy the wall between the two lines of fire drawn because he is able to draw line of fire to each of those squares. If this seems weird or confusing, don’t worry about it. The revised wording for destroying walls makes it clear that the line of fire from the attacker to the target square must go through the wall – as diagramed with Extant in the picture on the right. 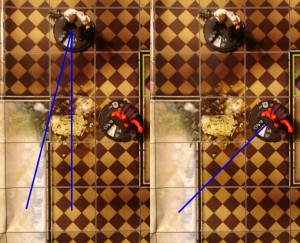 Replace and then Modify: The rule to replace and then modify has been around for a while and it isn’t going away. However, there’s always been complexity in understanding that this only applied to replacements and modifiers that occurred at the same time. And then laying out which happened when. For example, if you perplex up a character’s defense, and they then get a replacement defense from an adjacent character using Defend, but they are in occupying terrain – what does their defense value become? For many players it was confusing to know that the perplex modifier was overwritten by the replacement value while the hindering terrain bonus remained. So this rule has become more encompassing – all replacements and all modifiers are only ever calculated when you need to determine a character’s combat value, and that’s when you would do all replacements first followed by all modifiers. So our perplexed target in hindering terrain would get +2 to his defense after replacing it with his Defend buddy’s defense value.

Wild Cards: The confusion around wild cards has always led to questions about how long the team ability lasts, when one can change, and what happens when that change causes an action to become illegal. The 2010 Core Rulebook clarifies all of this to make things clear and makes a key change. Wild cards can still change their team ability with any declared action (friendly or not). We’ve made it more clear that this team ability lasts for as long as the wild card continues to use it, and that it may choose to stop using it with another action, if it so desires (even if it is not changing to copy another team ability). The only time that a wild card is not allowed to change its team ability is when doing so would make an action illegal. For example, if Mikron O’Jeneus is not copying a team ability when an enemy decides to target him with a ranged attack, Mikron cannot choose to change to Batman Ally with this action. He could have done in response to a previous action (even if he was not participating in it), but the current action cannot be made illegal through the change in team ability.

Intersections: We’ve never had a term to describe “the midpoint where 2 diagonal squares meet” though we’ve always needed to talk about it. With the new Core Rulebook, this mid-point is defined as an “intersection.” What’s more, in order to make game play easier, we’ve simplified rulings regarding intersections. When 2 different terrain types meet at a point, anything that crosses that point treats the intersection as if it were the more forgiving terrain type. While this is the rule we essentially had in place for lines of fire, it was different for moving. Now, all rulings are the same.

Alternate Team Abilities: Alternate Team Abilities are now considered a different thing from Feat cards. ATAs are a part of the Modern Age of game play, though there are some differences from when they were considered Feats. Mechanically, ATAs will no longer replace existing team abilities – they will be additional abilities that the qualifying characters can use. As we started with Hammer of Thor, ATAs will be keyword driven rather than based on team symbols. What’s more, we will be going back through all of the existing ATAs and over the course of the next few months, making them available through print-and-play with revised, keyword-driven, additive mechanics. All of this requires some slight changes in order to balance things out a bit. As you’d expect, these pre-existing ATAs will be modified so that they cost a little bit more than they did before. Another balance will be that a force can only have one ATA assigned to it. Finally, wild cards will be allowed to use these team abilities, just like they can use any other team ability on your force.

There are probably a few other changes that have a small impact to the game. When a combat symbol comes from a special power or ability, it is clear now that it overrides whatever other combat symbol the character currently possesses (and Namora will be getting a clarification accordingly to make her the exception). Feat prerequisites through special powers now require that the prerequisite be specifically named by the special power, so Nico loses her ability to qualify for nearly every feat.

The 2010 HeroClix Core Rulebook is included with the DC HeroClix Blackest Night Starter Game.  All 2010 Core Rulebook rules go into effect on the release day for the starter.  I can’t wait to see what you think. As always, send your questions to me at HeroClixRules@gmail.com and I’ll get back to you as soon as I’m able. Tomorrow, we’ll look at the new Powers and Abilities Card (and we might have a couple of surprises, too)!