The Watchmen are coming and some updates too

Here we are about 7 months after Hammer of Thor and we continue to make progress on many fronts.  In terms of product pipeline, we’ve got HeroClix on rails (for the most part).  We’re not running at 13 month schedules (like we used too) but we’re not at 6 month schedules either (like we were 6 months ago).  Honestly, scratching and clawing our way back into the game has been an eye opening experience.  From a product standpoint, our backs were against the wall and we’ve had to be extremely creative it how we got things done.  Not to toot our own horn but we’ve managed to fill the product pipeline in a VERY short time  while at the same time, improving quality.  I know you haven’t seen much of the new product but I will say – the best is yet to come.

We had to make some tradeoffs to accomplish all of this – We haven’t made as much progress as I would like to see on our website, customer service, redemption process and marketing.  I don’t mean to imply the people working on these aspects of our business have done a bad job – in fact, quite the opposite.  Everyone, has done a lot with very little direction.  As our attention moves from filling the product pipeline you’ll start to see more progress on all the other areas of the business I have been speaking about for months.  I don’t want you to think we’re making excuses, rather, I want you to know why progress on many fronts has been slow.  When you see our upcoming announcements, you’ll understand how much we’ve done in such a small amount of time.

Here are some updates:

Blackest Night: I thought we were out of the woods with respect to shipping but, as fate would have it, we’re still a little behind and the BN delay was largely due to shipping issues (missing a boat, customs, etc.).  Needless to say, BN will not be our smoothest release but it will get out on 6/9.  It’s worth the wait – it really looks good.

Watchmen: I just got the final packaging & figures and I must say it is one of the best looking products I have ever worked on.  I didn’t have time to photograph the final figs and packaging before we had to run it over to DC for approvals so you’ll have to deal with the “white box” versions in the photos below.  I want to be very clear – we’ve never done such a nice package – The box is made of the same material you use on a hardcover RPG book (see any D&D book).  It has embedded (invisible) magnetic clasps and has black, flocked trays for the miniatures.  The whole package is finished in Watchmen matte black/yellow.  We also made the decision to put all the marketing text and contents on wrapper that can be thrown away, leaving you with a showcase quality piece of display packaging. 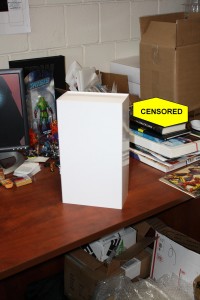 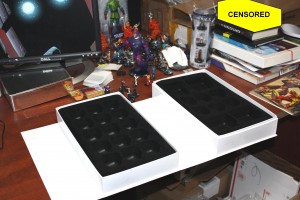 The figures are no less impressive.  In fact, I’ll go out on a limb and say they are some of the best paint jobs I’ve seen on HC pieces.  Dare I say, they might even top the BN Starter pieces in terms of quality.  I think we nailed a few problems that have plagued us for a while now – Thick paint and bad eyes.  The pieces I had were straight off the production line and they looked great. 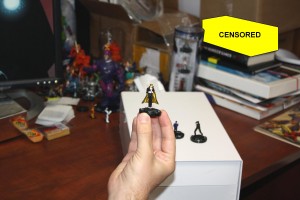 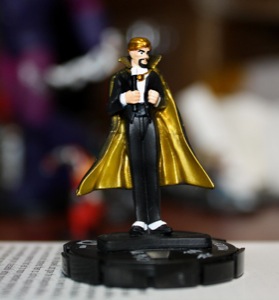 We’ll be starting WM previews shortly and I think we might even get a cameo from Seth Johnson.  Jake will be posting a multi-part interview with Seth over the coming weeks.

We’re considering a lower price point Mega-Batlle Pack (6 figures without the fancy packaging), for those of you that can’t drop the $99.00 on the collectors set.  Let me know what you think.

I almost forgot!  Dr. M is also looks amazing – We’re shooting to have both WM products available at SDCC.  Shipping, as usual, is the critical piece in the equation.  I will post an update on WM shipping as we get closer to July.  An alt version of Dr. M will be made available to retailers later this year – so don’t fret if you can’t make it to SDCC.

Web of Spider-Man: The initial response to our solicitation was among the loudest we’ve heard and we’re excited for our first Marvel set under the NECA era.  We’re going to get WM previews of of the way before we dive in to WoS sneak peeks – but don’t be surprised if we shoot an image or two your way in the meantime.  If all goes without issue, WoS will be at GenCon 2010

Brightest Day: Sculpts are in, packaging is being reviewed and BD is a worthy followup to the BN starter.  We’ll start sharing images and previews in a few months.

DC 75th: Moving forward as planned – I am in the process of reviewing paint jobs on the WLC.  They sculpts are looking great!

GenCon 2010: Lots of changes!  We don;t have our own room due to space constraints.  Norm is making sure all our events are accurate and up to date.  There have been significant changes to how you pay for events. Norm will post shortly when everything is squared away.

Origins Awards: As you may know, Hammer of Thor was nominated for Best Miniature Line.  As soon as I decipher how voting works, I will let you know how to vote for HoT.  For those of you going to Origins – get your ballots ready!

New Products: Over the coming months we’ll be announcing some new games, 5 come to mind.  I’m not sure they’ll all make it into 2010 but they’re pretty big announcements.  We’re looking at new categories, new target markets and new channels.  Expect the unexpected and keep in mind that not every game we do is for HeroClix players – though I suspect some of these announcements will get alot of you into a frenzy (in a good way).

WizKids Digital Initiatives: We’re also busy building out our online capabilities.  I can’t go into a lot of details right now but over the coming months we’ll start releasing information on our plans with regard to online gaming.

That’s all for now.