An Exclusive Watchmen Interview with Seth Johnson: Part I

It’s June now, and that means summer.  The birds are chirping, the sun is shining, and like you, I’d rather be inside rolling dice and playing HeroClix.  Like a fresh batch of summer sweet corn, I have bushels of ‘Clix previews coming over the next couple of months.  If you like spoilers and behind-the-scenes previews, you’ve come to the right place.

First out of the gates, I have an insider interview with Watchmen designer (and R&D veteran) Seth Johnson.  This preview is so beefy, that I’m going to need at least two articles to capture all of the sneak preview-y goodness.  Let’s not waste any more time.  Preview season begins … NOW!

Updated 6/10/10: Character cards, dials and tampos are linked to each figure image. With numerous HeroClix Lead Design credits under his belt, game designer Seth Johnson brings an unparalleled perspective on the ‘Clix Design process.  Leading the Design team for the Watchmen release, Seth was kind enough to give us a glimpse into his thoughts on design.

First of all, did you think you ever would have the chance to design a Watchmen set?

When I first started working on HeroClix, we had a short list of characters that were “radioactive”–characters we really wanted in the game, but for one reason or another were highly unlikely. Watchmen topped that list.

Happily, as we’ve put out HeroClix sets with an ever-wider variety of characters, we’ve built great relationships with licensors like DC Comics and Warner Brothers, who now trust that we’ll do right by just about any character they let us put into the game. That’s led to a lot of great opportunities.

That said, I still have to treat the characters on that radioactive list as impossibilities, or my heart would break on a regular basis. So when the call came that we could finally bring characters from Watchmen into HeroClix, it was a fantastic surprise…but one based on years of hard work by everyone on the HeroClix team.

What are the challenges and opportunities of creating a Watchmen set?

The top challenge has to be the widely disparate power levels possessed by the characters in the set, ranging from the street punks of the Knot Tops to the near-omnipotence of Dr. Manhattan. Bringing godlike power onto the battlefield while still keeping low-power characters viable and useful is a tricky business, but from special powers to minions we have a lot of tricks in the HeroClix design toolbox that helped me make it all work while still staying true to the characters. 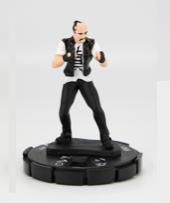 With regard to opportunities, every character we add to HeroClix is an opportunity to add their unique abilities and personality to the game. But with the large number of street-level, unpowered criminals who would appear in a Watchmen set, I also saw an opportunity to add something that had long been missing from HeroClix: a villainous counterpart to the generic Police team ability.

Cheap thugs in HeroClix have always been great Mastermind fodder or meat shields, but it’s always been hard to keep them with their boss–or to keep them together so they could be more effective by attacking a hero together. The Underworld team ability makes its debut in the Watchmen set, and I hope it helps make heroes nervous when a crowd of thugs gathers in the starting area at the far edge of the battlefield–because when they come across, they’re coming as a gang:

Playtesters enjoyed the Underworld team ability in testing, but we’re waiting to see what players think when the Watchmen set hits stores. If they like it, too, we may see it return in the future.

Which figure was your favorite to design?

Twenty years ago, I bought the DC Heroes Watchmen metal minis set, excited to see the characters in 3D. I can’t tell you how many times I put my Rorschach figure out on the battle map–superhero game, science fiction game, fantasy game, it didn’t matter;   no matter what my character looked like in the game world, on the table he looked like Rorschach.

So it was a thrill to work with Ben Misenar to make a new mini that was even cooler than my old metal classic (and boy did Ben deliver in spades!) Then, I had to design a dial that felt like it properly captured not just Rorschach’s uncompromising eccentricity, but also his undeniable effectiveness. For a guy fighting with just his fists and a fedora, I think Rorschach will do some damage before he can be taken out–particularly since he’s backed up with the new Watchmen team ability that keeps his combat values from getting knocked down:

That’s it for today!  Tune in later this week to see Part II of the first official Watchmen previews.  Until then!

One important aspect of R&D is linking a character’s dial and card design to its sculpt and paint.  We work hard to create reference documents for our awesome sculptors and painters to ensure we nail important aspects of costuming and the little details that matter.  Below, I’ve included one piece of art reference (including a quick sketch by self-described “non-artist” Seth Johnson) along with the figure that it begat. 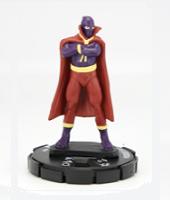 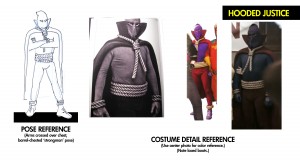