Marvel HeroClix: Web of Spider-Man was a joy to help create. Every HeroClix set is blast to work on, but with Web of Spider-Man, we chartered a new path.  Previous HeroClix sets that I worked on were collaborations with the HC usual suspects as well as Topps, but Web of Spider-Man, from the beginning, was an entirely different animal. For the first time, we were creating a set from scratch with the gang at NECA. The prior Wizkids team was fantastic, but it was fun to get an all new perspective on designing a set.

Guys like Brian Roll, our art director, Drew and Will, our product guys, and Bryan Kinsella, our operations hammer, provided fresh eyes to the set creation process. With their help and the continued support of our existing team, I think we hit the ball out of the park. The sculpts are engaging and dynamic. The game design is fresh, yet approachable. Also, the Brick figure is nothing like we’ve ever done before.

Selecting a Brick figure for a set typically proves a tricky task. The Brick figure must embody the spirit of the set, but not diminish the punch of the booster release. Simply taking the “best” figure from a theme and assigning it as “the Brick,” does a disservice to those that may not have the means to purchase a brick or to new players that typically try out Clix with a smaller purchase. We want the booster to have the figures that people expect in the booster’s theme. With the Brick figure, we want to reward our stalwart players and collectors that return set-after-set, buying Clix by the Brick with a figure that is BIGGER than the booster both in theme and sometimes in scale.

With Web of Spider-Man, many figures stood out as potentially “brick-able.”  We could have selected a core Spidey villain. Spider-Man has a large rogue’s gallery, and his villains provide unique options for sculpts.  Spider-Man also has the luxury of decades of key moments that could be captured in sculpt form.

However, when I think of Spider-Man, one image prevails. 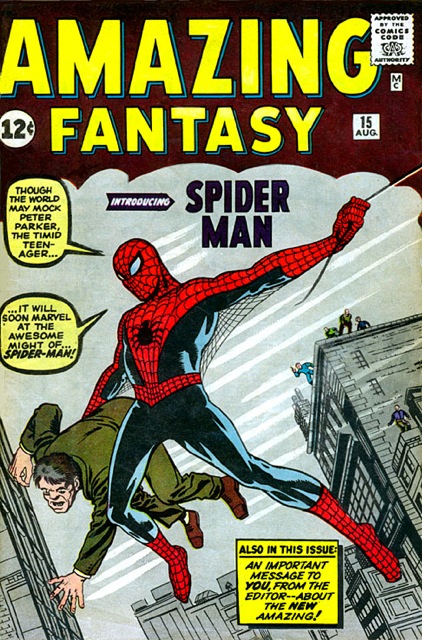 The cover to Amazing Fantasy #15 stands the test of time as a dynamic, engaging cover that grabs the reader and forces him or her to crack open the comic. While the Spider-Man story and mythos is uniquely compelling, as Joe Quesada himself has said, “the cover sells the book.” To a large extent, I believe he’s right. Story and art deliver on the promise that the cover makes. They capture the readers’ imaginations and bring them back for the next issue. The cover has the daunting task of getting someone to open the book. We could debate for a while on this subject, but I think the cover of Amazing Fantasy #15 is the most important cover in Marvel Comics’ history.

After selecting the image that we wanted, then came the hard part. We had to turn the two-dimensional into a 3D sculpt. Above, I mentioned our Art Director, Brian Roll.  Brian worked with our sculpt team to turn a flat image into an engaging sculpt that lures into the fan into the piece.

Initial Design- Despite its interesting path to completion, this sculpt began like 99% of our other sculpts- with the reference art. We distilled the reference art down to its core elements, and began with Spider-Man himself. His name is the “hook” for the set, and it was important to nail the look and feel of the classic Marvel icon. Below is an early concept sculpt from sculpting. 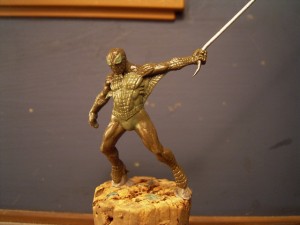 Next Steps- With a working Spider-Man prototype up-and-running, getting the second figural piece of the sculpt came next. Spider-Man swings effortlessly, carrying his subdued foe high above the streets of New York. The pic below showcases one of our early attempts to sync the “motion” of the sculpt together. 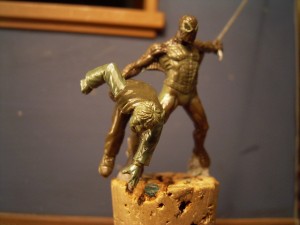 Beyond the figures- Now, came the tricky part. With thousands of Clix figures in our history, we know how to deliver awesome looking characters in Clix. In the Spider-Man comics, New York, itself, is a character. We wanted to capture the feel of the classic skyscrapers that frame the early Spidey comics. Figuring out how to deliver the architectural effect on the constraints of our base was quite a challenge.  Luckily, our art team was up to the task.  To aid sculpting, paper constructs were created to provide a template that could hold the scene together. An early look at one image follows: 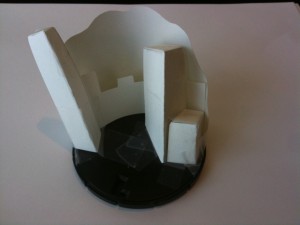 Putting it all together- With a blueprint in place, our sculptors were able and up-to-the-task of delivering the completed tableau. Unlike just about every sculpt in the history of HeroClix, we had assembled an iconic figure that felt like a “brick.” 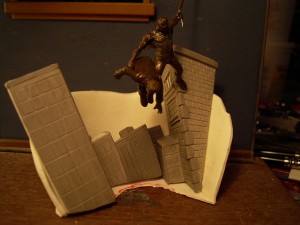 The use of relief and implied motion is really striking with this sculpt, and I think it’s unlike anything we’ve done before in HeroClix.  Let’s see how it looks with a fresh coat of paint and spiffy dial attached. You can even click the fig below to check out the card and dial. 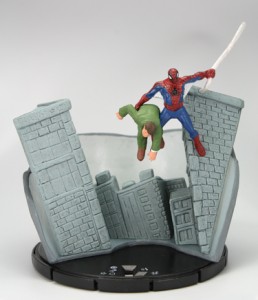 I hope you enjoyed this peek into the arts-y side of Clix and the set-creation process. A lot of thought and effort goes into producing top-notch figs for the fans.

For you red-blooded gamers, don’t worry, we’ll be back to talkin’ dials and powers later this week.

[Editor’s Note- The preview that was scheduled to run late last week will air on Wednesday, due to unforeseen scheduling issues. Thanks for your patience!]