The response, thus far, has exceeded my lofty expectations, and like you, I am ready to tear open some Web booster packs.  As the previews have been so positively received, I am hesitant to unleash more content. That being said, there is sooo much more to talk about in the set, and today, I have a particular gem to share with you.

With our set designs, we have tried to incorporate fully playable teams at reasonable point costs, as was mentioned with the U-Foes preview article.  Also, within a set, we try to incorporate a few buildable off-theme “teams” that can entice fans beyond the core theme.

The updated X-Force black ops team from the past few years stood out early on as an interesting, relatively small team that could get some X-Universe characters into a Spidey themed set. It includes three characters that were in need of updated remakes- Wolfsbane, Warpath, and X-23-, and it is led by one of the few characters in the Marvel Universe that rivals Spidey in overall popularity, Wolverine.

Coming up with fresh takes on popular characters in the Marvel Universe always provides a fun challenge, especially as we head into our fourteenth Marvel release. With Web, I think we did a great job coming up with unique Spideys and in this case, a great new look at Wolverine. The dynamic black-and-gray X-Force uniforms provide a look that will make it easy for new fans to aggregate their X-Force characters, and it frames each character in an all-new way. Who doesn’t want a stealthy, covert Wolverine?

Speaking of framing iconic characters in an all-new way, we decided to take your advice. We’ve been doing that a lot, lately. You have some pretty good ideas. Please, keep ’em coming!

With our Wolverine in Web, we have included perhaps the most request HeroClix R&D mechanic of all-time.

We finally gave you the Trait that you wanted, Wolverine’s Healing Factor. (Click the picture for a preview.) 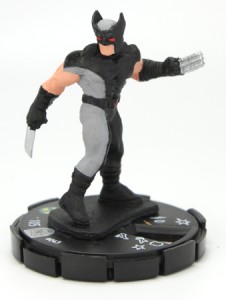 Wolverine now has can showcase his astonishing ability to walk away from the most brutal beatdown and keep on fighting. Powerful? Yes. Too powerful? We shall see. From a R&D perspective, we’ve explored this space a little bit in prior sets and with some of our prototype designs. Wolverine  (with his shiny new Healing Factor ability) made it through rounds of playtesting, and was deemed ready for primetime. I’m excited to see how fans will deal with this particular monster.

Going forward, I’m not sure that all Wolverine’s will have this exact Healing Factor ability, but Web’s X-Force Wolverine will be our first test of this powerful new Trait. In addition to his highly iconic Healing Factor, this Wolverine is also unlike many others, in that he serves a leadership role. Unlike many of the lone-wolf Wolvies in past sets, this Wolverine is a Reluctant, but Brutal Leader. He also includes a black ops favorite- Stealth. An intriguing and one-of-a-kind piece, Wolverine can lead in a squad, cloaked in shadows. Then, when the time is right, unleash six Claws of pure hell, giving way to his signature Whirling Attack.

As an added spoiler, Web of Spider-Man includes Wolverine’s son, Daken. That means that you also can get a pseudo-family reunion going with a Wolverine, X-23, and Daken team.  Neat!

If you’re at GenCon now, have fun in the events, and let us know how the best four days in gaming went on our WizKids FaceBook page.