After the Blackest Night, comes the Brightest Day!

With just a week to go, there’s been a lot of buzz regarding the Brightest Day Action Pack.  What better way to celebrate its impending release than by showcasing some of the figures?!

Some of you had the opportunity to ask questions and see the figures on display at GenCon and your feedback was very positive.  We’re very happy with the set and we know that you will love playing with these figures!

As you know, at the conclusion of the Blackest Night event, 12 Heroes and Villains were brought back from the beyond, and there appears to be a mysterious agenda set forth for them.  The Brightest Day year-long series spotlights these Heroes and Villains as they attempt to make sense of their resurrections, as well as work out what this agenda could be.

All we know for sure is that it’s great to have such wonderful characters to work with! Now, without further adieu, here’s our first preview: Hawkgirl! (click on image below) 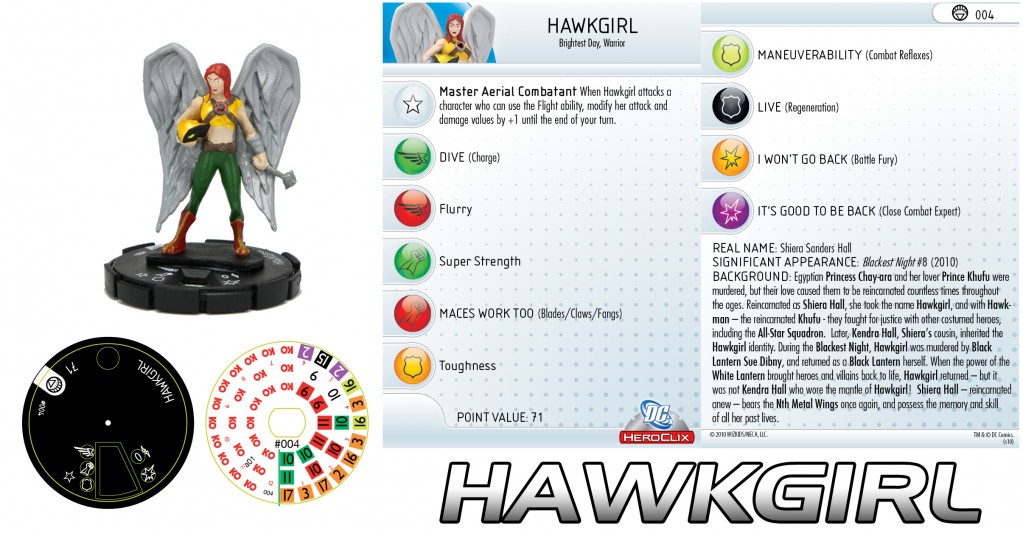 Hawkgirl has enjoyed a long and celebrated history.  Originally an Egyptian princess, now she is a reincarnated warrior fighting for the forces of Good against foes both modern and ancient.  As her story unfolds in the Brightest Day comic, you can use Hawkgirl to fight for victory at your local game store’s events!

As you can see, Hawkgirl’s strengths are definitely in close-quarters fighting.  Her Master Aerial Combatant Trait is certainly useful when targeting your opponents’ fliers, and the opening click of Super Strength and Charge make for a great combined asset.

Also, later on in her dial Hawkgirl demonstrates her skills with ancient weapons (represented by both Flurry and Blades/Claws/Fangs) as well as her decades of experience fighting hand-to-hand (Close Combat Expert).

Lastly, Hawkgirl’s consistent combat values  and the late dial Regneration helps ensure that she can continue the fight and bring justice on swift wings to those who oppose you!

Stay tuned in the coming days for even more exciting previews from Brightest Day as we prepare for the set’s release, and keep on Clix’ing!