As we inch ever closer to the Brightest Day release date (will Wednesday ever come?!?), what better way to pass the time than with another Brightest Day preview?

This time around, I thought I’d visit a personal favorite; he’s the King of the Seas, the Monarch of Atlantis, and one snappy dresser (what? Orange is the new black, haven’t you heard?): Aquaman! (click on the image below) 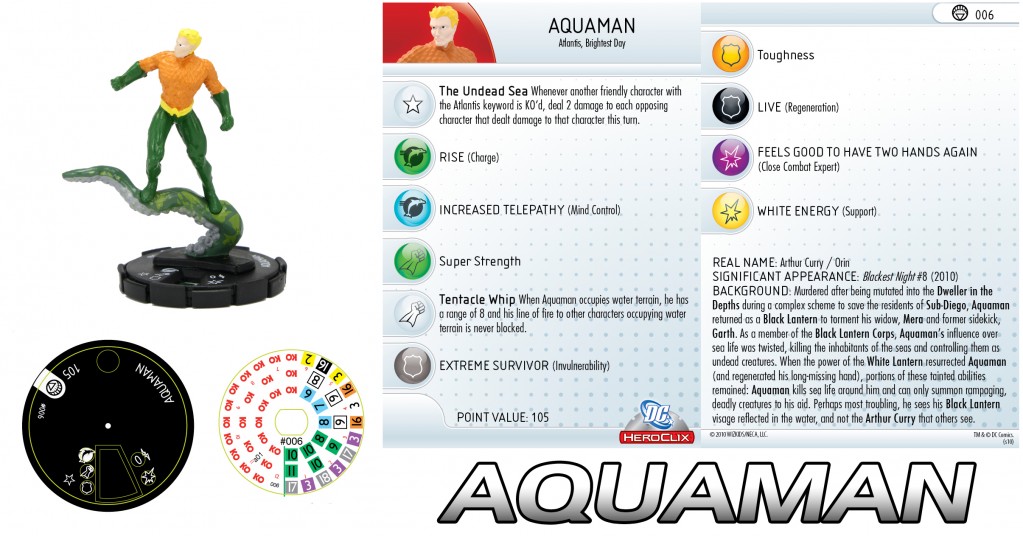 Aquaman is back and he’s ready to mete out some justice on behalf of the seas! First off, let’s look at that Trait: The Undead Sea certainly will have your opponent’s thinking twice when you pair Aquaman with other figures with the Atlantis Keyword on your force! The ability to deal 2 Damage in response to one of your figures being K.O.’ed is a great asset, and worked correctly, could be devastating to your opponents’ forces!

Aquaman’s bag of tricks doesn’t end there though! As a Transporter, Aquaman also has access to the Move and Attack ability and is able to carry your other figures to where they can do the most good for your force!

Consistent combat values and solid powers make Aquaman an excellent choice for a secondary attacker and support piece (literally! He has Support on his late-dial!), as well as an excellent core for any Atlantis-Keyword-ed team!

And lastly. let’s not overlook that sinister tentacle rising form the Deep! Aquaman’s Tentacle Whip Special Power gives him the benefit of an 8 Range with an unblocked Line of Fire so long as his target occupies water terrain!

So get kraken (see what I did there?) and start planning how Aquaman will help your latest invasion of the surface world at your next local tournament and join us next week as we ramp up the previews and prepare for the Brightest Day release!