It’s a new week, so that means more previews! We last left off with the Monarch of Atlantis, so let’s now turn our gaze eastwards to the sandy dunes of Khandaq and check in with Osiris! (click on image below) 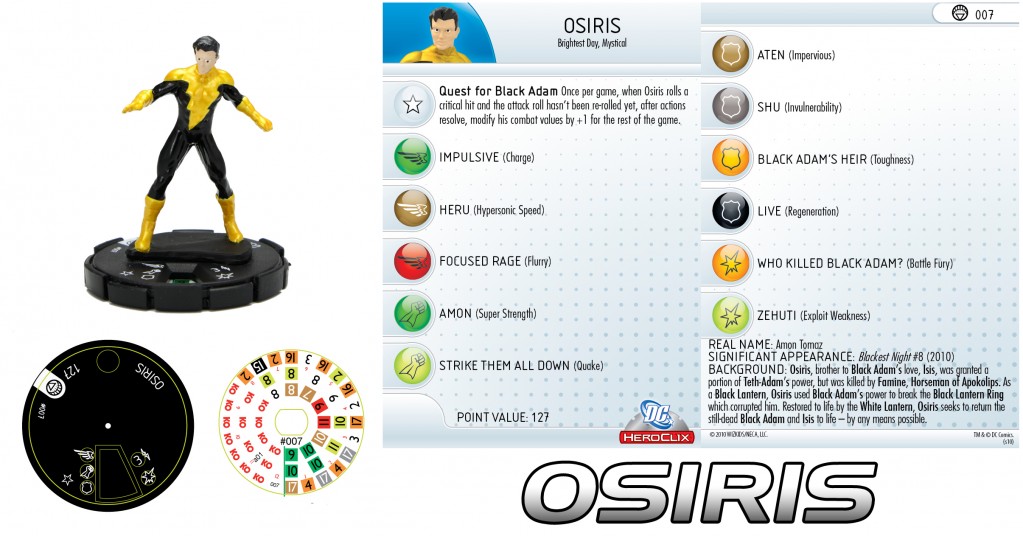 Once imprisoned and tortured by Intergang, Amon Tomaz was freed due to his sister’s relentless searching and Black Adam’s strength.  Bequeathed with a portion of Black Adam’s power, Amon assumed the mantle of Osiris and went out into the world to seek adventure.

Unfortunately, Osiris’ recklessness eventually led to his demise, but he has since been resurrected by the Entity, and now seeks to likewise resurrect both his sister Isis and Black Adam!

Now, Osiris may be a troubled young man, but you’ll have no difficulties playing this figure! With front-loaded Charge and Super Strength, and consistent combat values, Osiris is ready to dispense his own brutal sense of justice!

Mid- to late-dial we see Osiris switches between Hypersonic Speed and Flurry, while enjoying some Quake and Exploit Weakness as well, allowing for a number of cool combat options.

Lastly, let’s not neglect the possibility of rolling a critical hit during the game! If that happens, Osiris’ Trait, Quest for Black Adam, triggers and now Osiris has a +1 bonus to all of his combat values for the remainder of the game!

We still have two more days before Osiris joins the rest of your HeroClix collection, but you can start planning now how best to use him at your store’s next event! Stay tuned for more exciting previews as we prepare for the Brightest Day release!