With one day to go, I thought we should check in with a troubled two-some.  Re-born from a binary matrix combining both Ronnie Raymond and Jason Rusch, we present Firestorm! (click on image below) 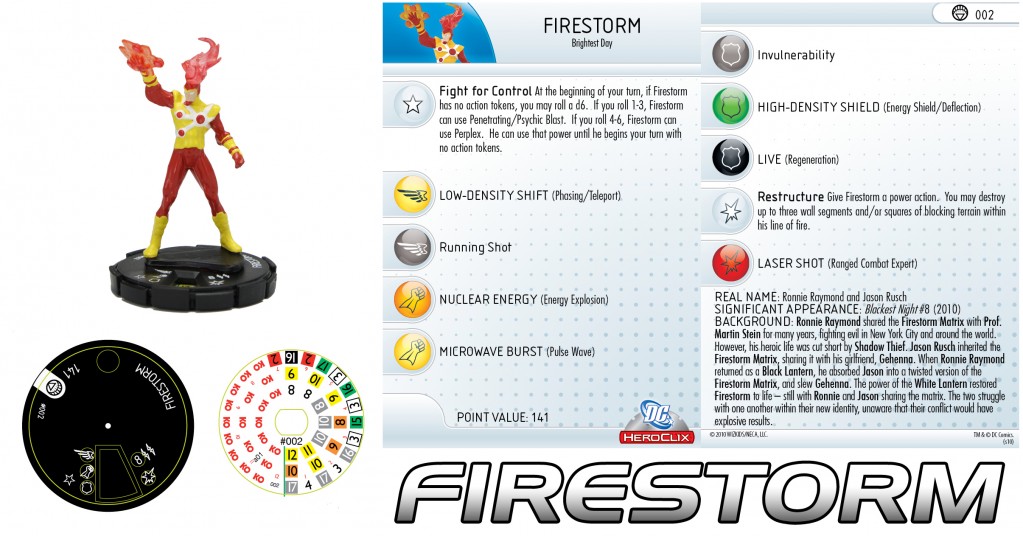 Since his resurrection, Ronnie Raymond has shared the Firestorm matrix with Jason Rusch, but their partnership is tenuous at best.  Worse yet, their combined emotional state is directly reflected to their energy output; in other words, the angrier they get, the more dangerous they are for everything around them!

The Fight for Control Trait represents Jason and Ronnie’s unbalanced control of the Firestorm Matrix, and allows you access to powers which could be very useful in your game.  Couple this with a dial allowing for many combat options, and you have a versatile and useful aerial figure.

Some mid-dial Running Shot ensures that Firestorm can still bring the fight to your opponents, and the Pulse Wave doesn’t hurt either!

Lastly, let’s not forget that Firestorm can remove those pesky walls or squares of Blocking Terrain your opponent’s figs keep hiding behind! Now your other attackers can take shots at their leisure and Firestorm can continue to support their efforts with that aforementioned Perplex! (Just make sure to roll for Perplex before you give him the Power Action to remove the walls/Blocking Terrain!)

That’s all for now, but we’ve only got one more day to go before Brightest Day’s release!