Brightest Day is now available in stores everywhere, and I thought I would visit another personal fave in honor of the event.  So without further delay, here’s Deadman! (click on image below) 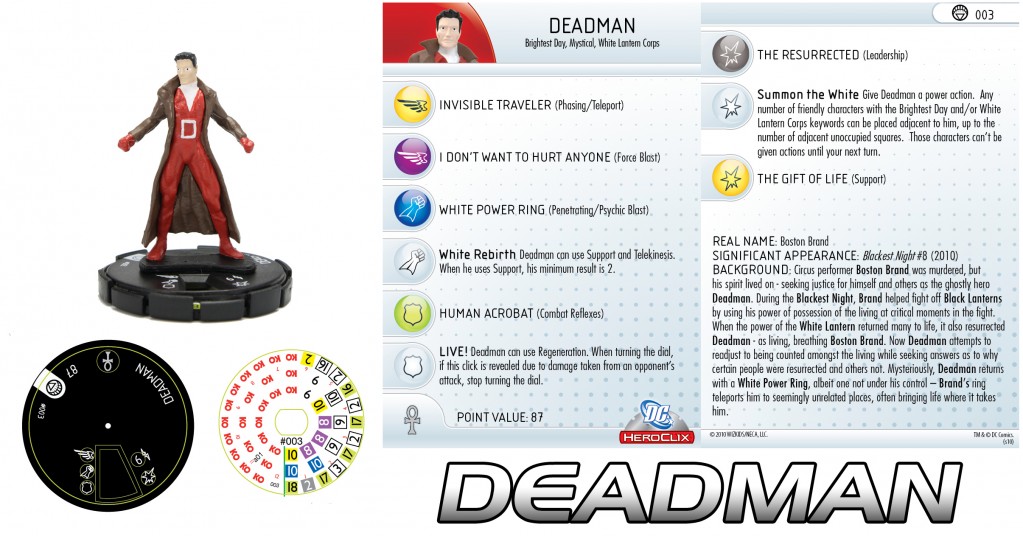 Boston Brand has sure endured his shares of ups and downs; originally a circus acrobat his tragic death propelled him into the world of Karmic balance under the guidance of Rama Kushna.  Over the years Boston, as Deadman, has helped countless heroes and civilians find peace or defeat evil all while searching for his own killer.

Now alive after years of spectral servitude, “Deadman” seems to be a pivotal piece in the Entity’s agenda for the 12 Heroes and Villains resurrected after the Blackest Night.  However, Deadman has no clue what his purpose is and the Entity isn’t telling, at least not outside of the occasional prompting to “eat a cheeseburger” anyhow!

While Deadman probably won’t be eating any burgers during your games, he will help you dish out some hearty helpings of pain to your opponent’s figures!  His array of support abilities, as well as his very consistent combat values, allow for a host of tactical opportunities during your game!

Not to mention Deadman’s ability to summon friendly figures with the White Lantern Corps and the Brightest Day keywords! WOWZAS! Need some reinforcements? Deadman has your back!

That’s our last Brightest Day preview, but fret not! The set is now available at your local game store, and I’m sure I’ll be back again soon with more exciting things to share! Until then, keep those dials off of their KO clicks everyone!