“The Avenger will come”.   Those prophetic words uttered by a dying woman heralded the introduction of the first masked crime fighter of the Golden Age. Lee Travis, as the Crimson Avenger, led the charge against evil-doers and inspired others to don the cape and cowl and fight for justice.

Gifted by Rama Kushna with a vision of Superman’s selflessness, the Crimson Avenger was inspired by the the Kryptonian’s power and sense of duty. Whether he was subduing criminals in the urban arena or fighting the cosmically powerful Nebula Man, the Crimson Avenger was ever at the forefront of danger and ready to fight to for those who could not fight for themselves. 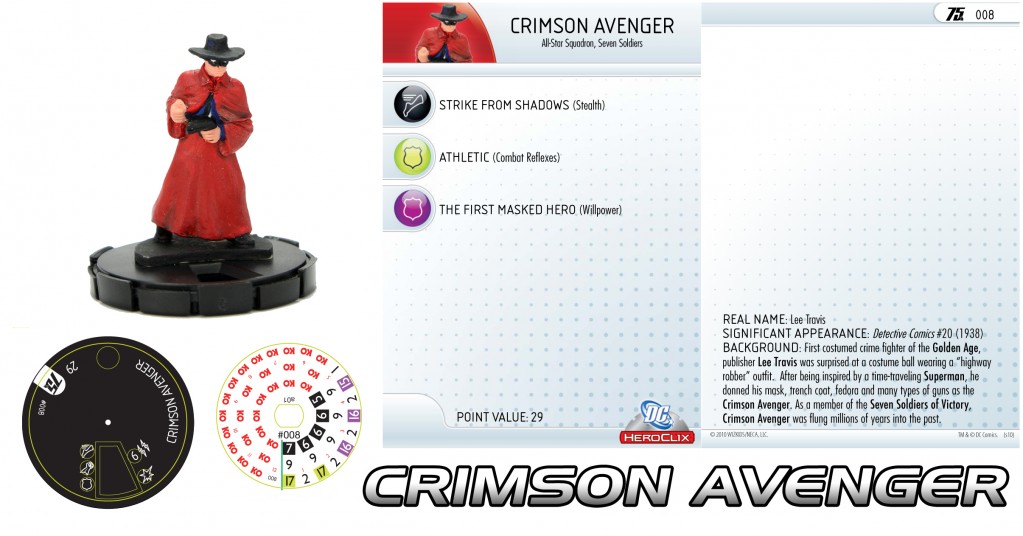 The Crimson Avenger packs a solid punch with consistent combat values for an economical price! Striking form the shadows, his 6 Range and two targets enables the Crimson Avenger to readily support the rest of your force. The opening 19 defense vs. close combat attacks certainly doesn’t hurt either!

At 29 points, the Crimson Avenger is a solid addition to many strategies, a great figure for theme play, and will definitely be a great figure to pull in any Sealed game!

Join us next week as we preview another urban crime fighter with a long and storied career from DC 75th!  Have a great weekend everyone, and keep those dials off their K.O. clix!