Shadow of the Bat

Bat-fans everywhere are familiar with Dick Grayson’s story; the orphaned son of renown circus performers and protégé to the original Batman, Grayson’s been no stranger to the strange over the course of his career.  As Robin, he has faced down the Arkham inmates.  As Nightwing, he has fought against the evil schemes of Deathstroke and the Brotherhood of Evil.  Now, as the Batman, he is charged with protecting the City his mentor once stood sentry over.

Talk about some pretty big boots to fill! Or should I say cowl? Either way, this Batman comes to the fight ready to mete out justice! Say “hello” to the All-New Batman! (click on image below) 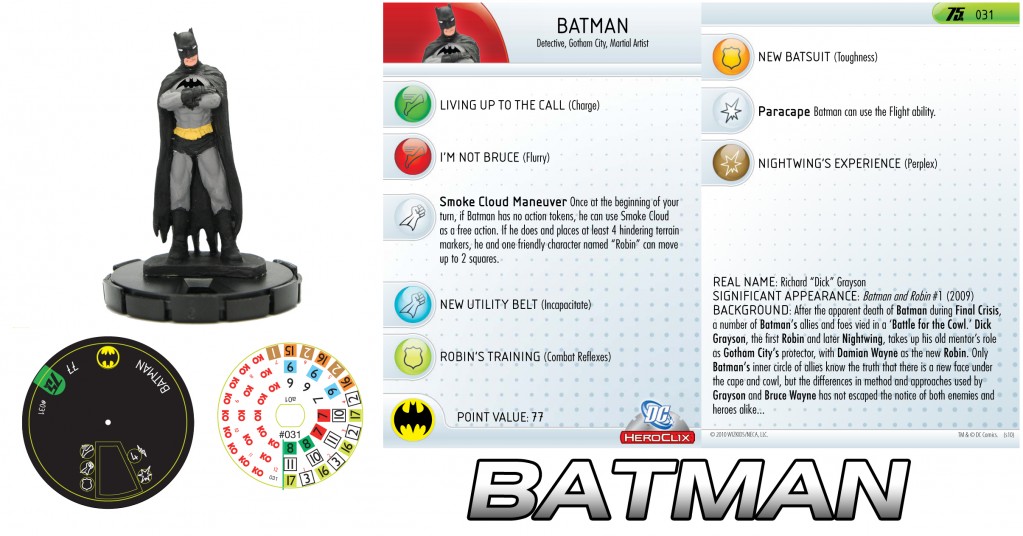 At first glance, Batman appears every bit the Dark Knight his mentor was, but this Caped Crusader brings a very different skill-set to the fight!

First, let’s look at that Paracape Special Power.  A Batman with Flight? Yes please! Combine that with his front-loaded Charge and Batman makes for an excellent early-game attacker.

Batman’s Smoke Cloud Maneuver Special Power also allows him and a friendly figure named “Robin” to reposition under the cover of smoke! As most fans who enjoy playing Bat-Ally teams will attest, the ability to place Smoke Cloud tokens and move is very useful, especially when it can be done as a Free Action!

That’s not all, with consistent combat values all down through the dial, Batman is in the fight to win it.  Late-dial Perplex and Incapacitate ensures that he remains useful throughout the battle!

Be sure to check in with us later in the week for even more previews as we continue to count down to the next HeroClix release: DC 75th Anniversary! Until then, keep on clixin’!