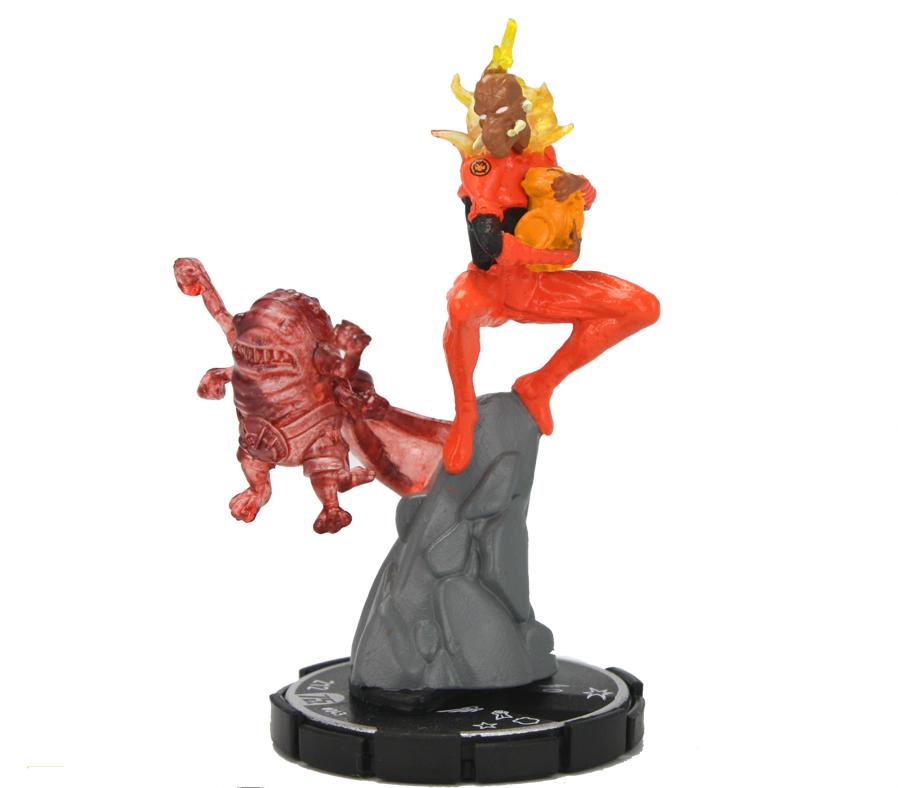 When I first saw Larfleeze I was delighted to see a figure that brings its own new take on the game with it. I asked Jeff (normalview) Orasky, one of the Rules Deputies to take a bit and help folks with a “Larfleeze Primer”. Please send all accolades for the following to him:

Larfleeze is the living embodiment of avarice. He’s managed to acquire a rather impressive array of special powers and a trait, allowing him to do some things that no other character has ever been able to before. He will jealously hoard these new game effects unless we pry them from his grasping fingers and bring them out into the open. So whether you wish to greedily squeeze every last bit of utility out of your Larfleeze character or you want to steal victory out from under an opponent playing him, we need to understand exactly what his trait and special powers can do. 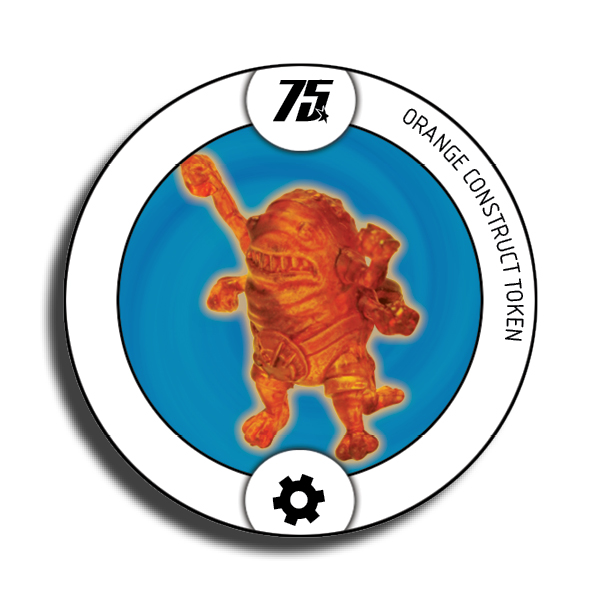 This trait has a lot going on, so let’s break it down piece by piece.

Orange Construct objects are objects that can’t be picked up and are removed from the game if Larfleeze is KO’d.

Right away, we’re introduced to a new game effect: the Orange Construct object. These Orange Constructs are objects, so there are many rules they already follow. If you deal it 3 damage, it is destroyed. If a line of fire crosses it, the line of fire is hindered and powers like Stealth would cause that line of fire to be blocked. But they also have a variety of unique properties that set them apart from standard and special objects. In fact, since they are so different that they are not even considered heavy or light. While you could use Telekinesis option 3 to make an attack with one, you would deal no damage since only heavy and light objects define how much damage they deal when used in an attack.

Keep in mind, though, that since they are still objects, you can also do a lot of the same things you can do with standard and special objects. For example, if you want to get an Orange Construct into prime position for Poisoning (more on this later), you can use Telekinesis to move the Orange Construct to the desired location. Or, if you’re having trouble getting past the Orange Constructs to reach Larfleeze, a character like Phantom Girl (whose special power allows her to remove objects from the game) could make very quick work of them.

In a nutshell, these Orange Constructs behave like the objects we are already familiar with except for where specific differences are described in the trait.

Whenever Larfleeze is moved, after actions resolve you may move any or all Orange Construct objects an equal amount.

What are the rules for moving an Orange Construct? Orange Constructs are objects, not characters, so they do not need to roll for break away and they will not have to stop moving if they become adjacent to an opposing character. However, they also are not given any special rules for ignoring terrain when moving, so you will have to keep an eye out for terrain features when moving the Orange Constructs, even though Larfleeze may be moving with Phasing/Teleport, Flight, etc..

Characters adjacent to or in the same square as an Orange Construct object are considered adjacent to Larfleeze for Poison and close combat purposes.

As I hinted at earlier, Larfleeze can use these Orange Constructs to spread his insidious and selfish desires. Any opposing characters occupying or adjacent to an Orange Construct can be Poisoned or attacked with a close combat attack as if that character were adjacent to Larfleeze. Combine this part of the trait with the ease in which these objects can be spread across the board and you’ll quickly find that there is no such thing as a safe place to hide from Larfleeze.

Whenever Larfleeze would be dealt damage, you may deal up to 3 of the damage to a single adjacent Orange Construct object and then remove it from the map.

First, even though this power does seem very similar to Mastermind, please note that the words “Mastermind” never appear in the description. So this power can not be used to meet any prerequisites of any feats that require Mastermind.

Last, but certainly not least, we’ve got a special power appearing in the damage slot that actually tells us how the Orange Constructs are brought into the game.

Once during your turn, you may give Larfleeze a free action and place an Orange Construct object on the map within his range and line of fire. If there are already two or more of these objects on the map, this is a power action instead.

This special power allows Larfleeze to place these objects at any time during your turn. So if he is still able to use this power as a free action, he can create a new Orange Construct at the beginning of the turn and then use his Poison on characters adjacent to the new Orange Construct. This might let you catch an opponent by surprise if they think they are safely out of Poison’s reach at the beginning of the turn.

There is a lot going on with this trait and accompanying special powers; you may even be feeling a little overwhelmed right now. But that’s okay… while this can seem a little intimidating at first, just take these new game effects a step at a time and they’re very manageable. And, hopefully, this primer on Larfleeze’s new powers and abilities will give you the edge you need to crush your opponents and take the prize which is rightfully yours. His greed knows no bounds and now you can harness that power for your own… or more effectively combat his power before it consumes you.