Rage of the Red Lantern

With blood and rage of crimson red,

Ripped from a corpse so freshly dead,

Together with our hellish hate,

We’ll burn you all–That is your fate!

Today’s preview comes all the way from Space Sector 666 and is one of the oldest foes of the Oan Guardians.  One of five survivors of a sector-wide massacre perpetrated by the Manhunters, this figure is not taking any prisoners!

Allow me to introduce you all to the leader of the Red Lantern Corps, Atrocitus! 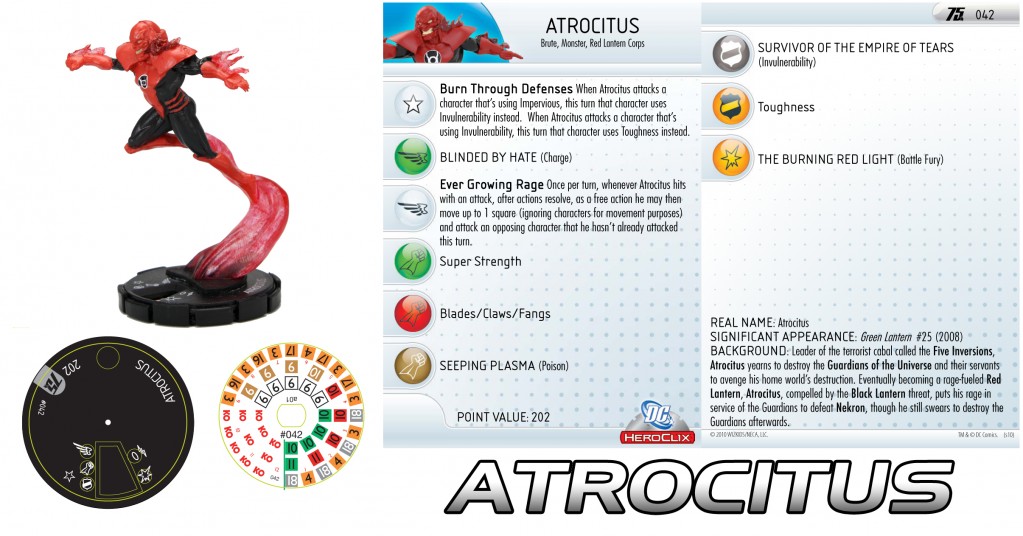 Atrocitus is a formidable combatant and canny foe, and this figure represents his ferocity in battle accurately!  His “Burn Through Defenses” Trait allows Atrocitus to more readily damage his foes, while his Indomitable ability enables him to attack turn almost every turn.

Front loaded Charge and Super Strength gets him into battle quickly for some first strike terror, and early to mid-dial Blades/Claws/Fangs gives you the option of trying for more than his printed 3 damage! Or, pair Atrocitus with the Red Lantern special object and pump his damage up by +1 thanks to his ever-present Battle Fury!

Consistent combat values and an aggressive power selection make Atrocitus a powerful asset to any force and opponents should be wary when he appears on the battlefield!

That’s all we have for today, but be sure to join us on Friday as we visit the other end of the emotional spectrum!