Catch Me If You Can!

Today’s preview races all the way from Central City! I am very pleased to present to you all the Flash, Barry Allen! (click on image below) 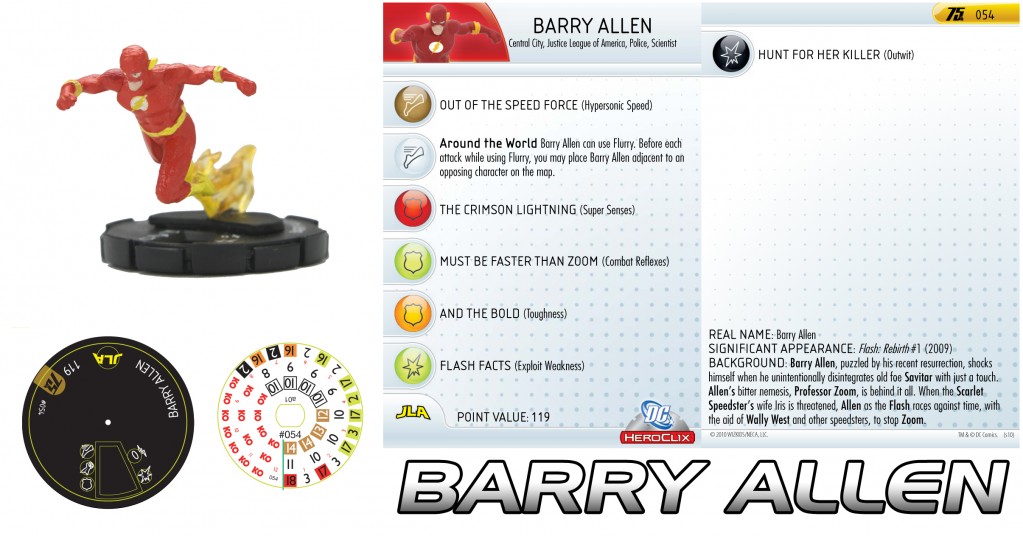 Though habitually late in the comics, Barry Allen won’t be missing any of the action in your HeroClix games!  As you can see, his dial is loaded with great powers that keep Barry both maneuverable and effective in combat!

Front loaded Hypersonic Speed eventually gives way to Barry’s “Around the World” special power which allows for some pretty interesting tactics.  A Flurry special power that allows you to place Barry where he’ll do the most good is an incredible asset to any force!

Of course, you may not even see Barry’s special power as he’s not going to be an easy target for your opponents.  Even if they are somehow able to catch him, hitting Barry’s 18 Defense won’t be easy thanks to his front loaded Super Senses! And after that, Barry applies his knowledge of speed tactics to good use in the form of Combat Reflexes!

HeroClix fans have long awaited a Flash that would fill the role of a quintessential Barry Allen and this figure definitely delivers!  At only 119 points, Barry Allen is sure to serve up some swift justice while leaving enough space for other great figures to join him (or at least try to keep up!) on his team!

Thanks for joining us today.  Be sure to check in with us later this week as we’ll be examining the battlegrounds you can expect to play on at your local tournaments.