Today we’re taking a look at a couple of the Limited Edition figures you’re going to see in the DC 75th Anniversary Organized Play kits next week.  These two figures (of five) will be offered as prizes for events held at your local Venue’s tournaments.

First up, we encounter a strange denizen from another planet and a refugee from a space carnival, Gleek! 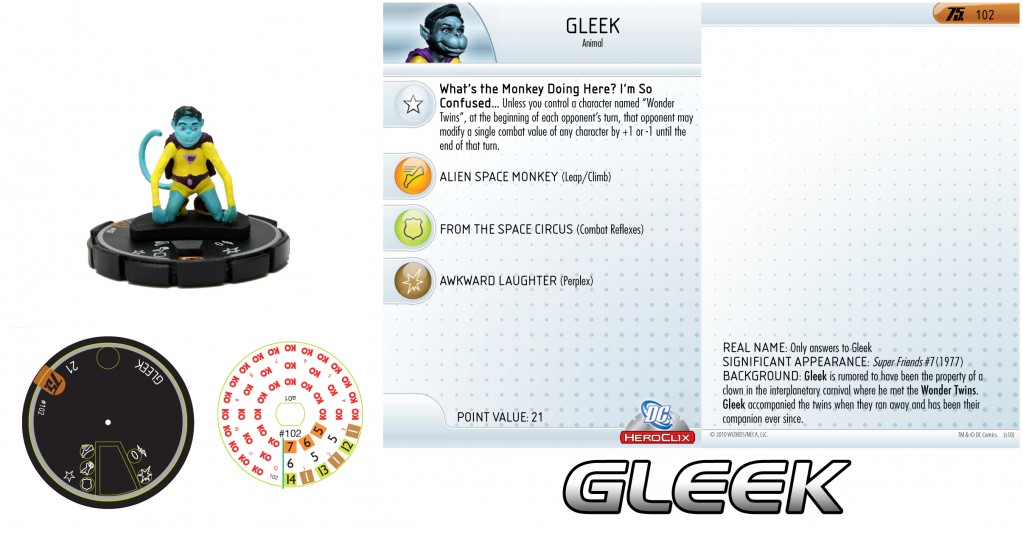 Fans familiar with Gleek may recall his penchant for being as much a hindrance as he was helpful, and this is represented by his Trait: What’s the Monkey Doing Here? I’m So Confused… If the Wonder Twins aren’t present to manage him, Gleek can be a bit of a nuisance, allowing your opponent to modify a single combat value on a figure of their choice by +1 or –1.  While Gleek does have Perplex for his entire dial and that is pretty useful, I think making sure Zan and Jayna are around to keep an eye on him may be the way to go!

Next up we have probably the most famous denizen of Gorilla City.  He’s a tremendously powerful psychic and a malevolent force to be reckoned with, Grodd! 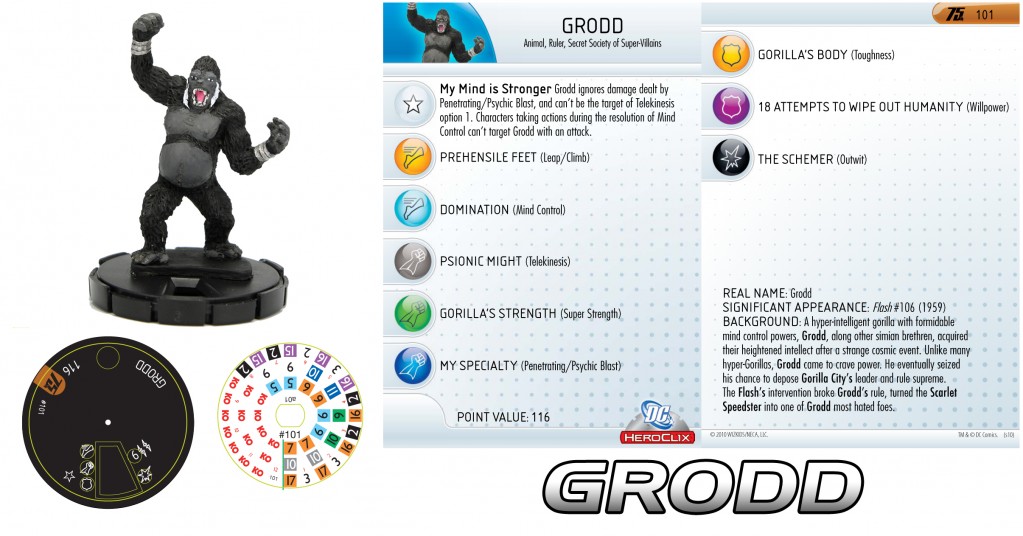 At 116 points, Grodd packs a potent psychic punch for a very economical value! Front loaded TK eventually gives way to Super Strength and Outwit, and finally his Attack values take a boost as he unleashes his mental fury in the form of Psychic Blast as he picks up Willpower mid-dial!

And let’s not overlook his Trait: My Mind is Stronger.  Damage from Penetrating/Psychic Blast attacks is ignored by Grodd as well as attempts to use Telekinesis (Option 1) against him!  If that wasn’t enough, Grodd’s mental powers also prevent mind controlled figures from targeting him with an attack! WOW!

I hope you’ve enjoyed the continued peek into the DC 75th Anniversary OP Kit as much as I have.  Next week we finish up with the Limited Edition Figures, as well as take a look at some 3D Special Objects.  And, oh yeah, the SET RELEASES!

Have a great weekend all, and keep those dials off their KO clix!