The Greatest Lantern of Them All!

All around the world, HeroClix players are celebrating the release of DC HeroClix’s latest expansion, DC 75th Anniversary.  Many of you have enjoyed midnight release events at your local Venue and have gotten some games in already with your new pieces.

But the excitement doesn’t stop there!

Remember to keep hold of your UPCs and your receipts, because in just about a month, the DC 75th Anniversary Buy It by the Brick program will go live and you can send away for your very own exclusive White Lantern Sinestro! 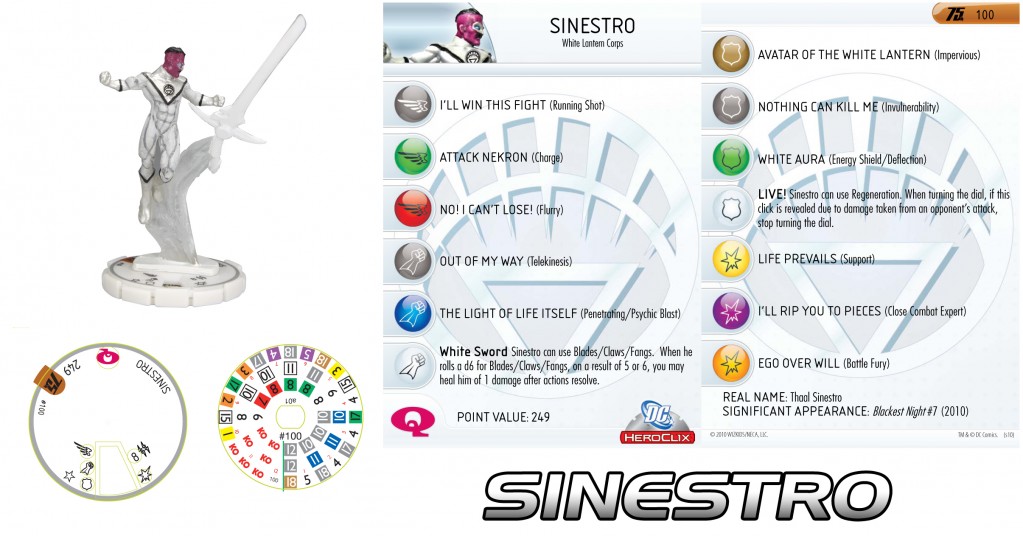 Sinestro comes to the battle ready to show the universe why he was known as the greatest of the Green Lanterns, and uses those skills and experience with deft precision as a member of the White Lantern Corps.  As a one-time avatar for the White Entity, Sinestro wielded awesome might as evidenced by his dial.

Solid and consistent combat values, the ability to move and attack on more than half his dial, and the Quintessence Team Ability all make for a formidable foe.  Consider also his White Sword and LIVE! special powers, both which allow Sinestro to stay on the battlefield longer, while also dealing out damage (in the case of the former).

Sinestro wraps up our previews for DC 75th Anniversary, and I hope you’ve enjoyed them as much as I.  We’ll have more announcements and articles in the days and weeks to come, but in the meantime this HeroClix fan is going to enjoy all of his new figures!