When I was asked to begin reviewing figures for the GSX preview schedule, one name shot out over all others.  One name, synonymous with Mutantkind and its struggles: Magneto! (click on image below) 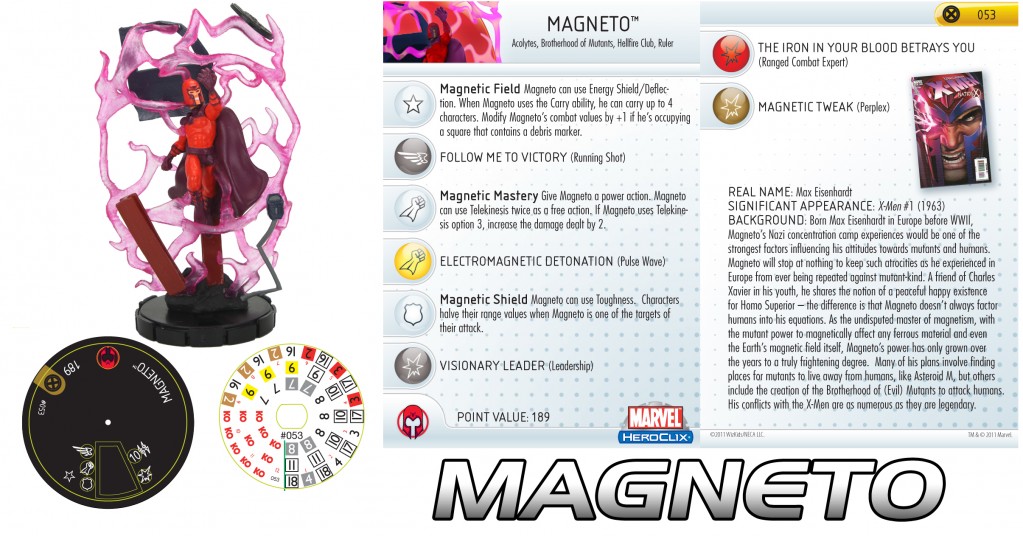 The Master of Magnetism is BACK and he’s taking no prisoners.  Magneto is a formidable piece whether he’s manuevering his allies into position or simply blasting away at his foes.   His Magnetic Field Trait ensures that he’s always a hard target from ranged attacks, and if he’s placed in a square containing debris,  he receives an additional +1 to all of his combat values! Lastly, Magneto is also able to carry up to four of friendly figures with this trait, allowing for superior battlefield positioning!

Magneto’s Magnetic Mastery special power enables him to either use Telekinesis twice, and if he uses Option 3 (attacking with an object), he increases the damage dealt by 2!

Magneto’s tricks don’t end there though! His Magnetic Shield special power grants him Toughness as well as causing opposing figures to halve their range values when they target him with a ranged attack!

And on top of all that, his array of standard powers and combat values ensure that the Master of Magnetism will foil your foes at every turn!  Combine him with figures that are willing to smash through a few walls or destroy some Blocking Terrain and Magneto will set bet set up nicely to dominate the battlefield!

That’s all we have for today, and I hope you are all as excited as I am! Join us next week as we continue our GSX previews!!!  And if your lucky enough to attend Clixathon this weekend, be sure to say “Hi” to Justin and see what other GSX goodies he has to share! (I know I’ll be there!)