Today’s preview is the result of cruel experiements conducted with one purpose; to hunt down and destroy mutants! Meet the Omega Prime Sentinel! 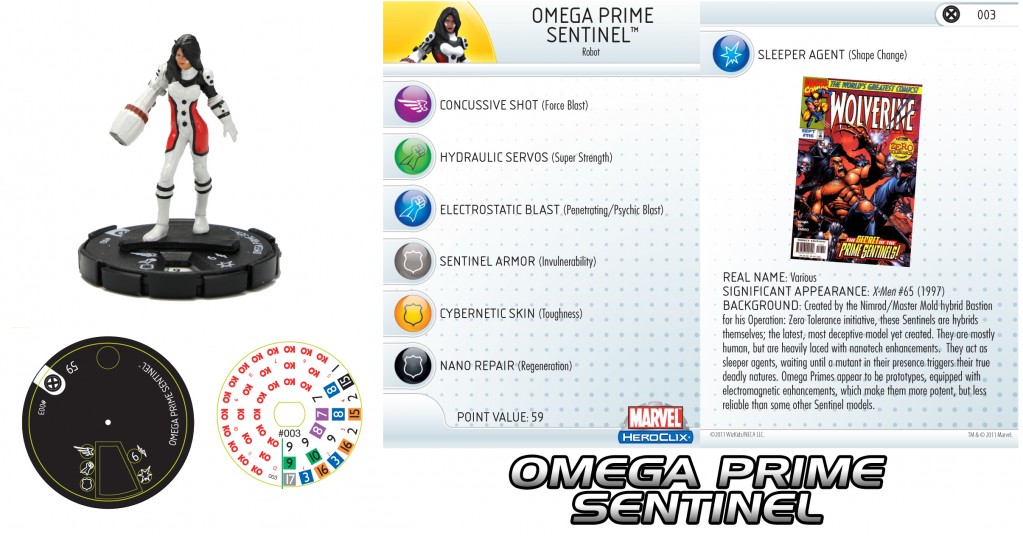 Consider first that this Rookie-level Omega Prime Sentinel opens with 3 damage and continues down the dial with consistent combat values.  Its starting clicks of Super Strength also adds to its damage potential, and two clicks of Shape Change means that the Omega Prime Sentinel has a good chance of getting close to its victim and your opponent may not be able to do a thing about it!

Invulnerability and Toughness protect the Omega Prime Sentinel from harm while late-dial Regeneration enables it to pop right back up to its first click potentially.  Mid to late-dial Force Blast and Psychic Blast ensures that your Omega Prime Sentinel will always have a trick or two up its (rather large!) sleeve.

And lastly, there’s that keyword.  I don’t know about you, but I can’t wait to team up some Omega Prime Sentinels with Phalanx Soldiers (Hammer of Thor #008) and Ultron (Hammer of Thor #049)! They’ve got be at least distant cousins (thanks to the various Technarchy/Phalanx technology), right? Either way, that’s one Robot theme team I can’t wait to unleash on my friends!

That’s all we have for today.  Join us next week as we take a sneak peek at more exciting figures from Marvel HeroClix Giant-Size X-Men!