Oh My Stars and Garters!

Today’s preview is easily the most loquacious and erudite of the X-Men.  We proudly present to you Dr. Henry Phillip “Hank” McCoy,  the Beast! (click on image below) 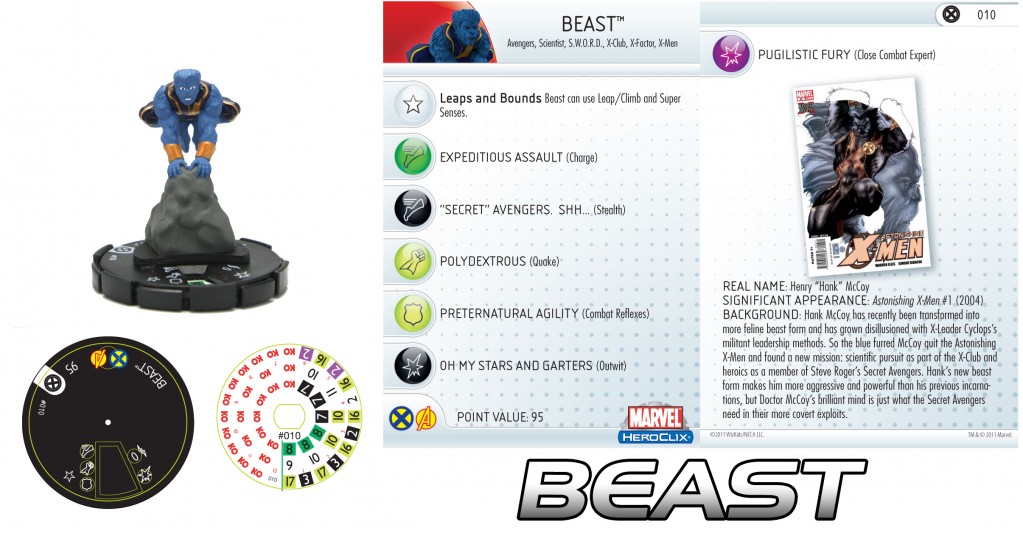 As you can see, Edna McCoy’s bouncing blue boy brings quite the arsenal of powers to the fight!  Beast’s Expeditious Assualt allows him to charge in where he’ll do the most good, while early-dial Outwit ensures his experience and scientific know-how are put to the best use; undermining your foes’ powers and abilities!

Once Beast is engaged in the melee, his Preternatural Agility (Combat Reflexes) and his Trait help keep him safe from harm! Leaps and Bounds grants Beast a full dial of Super Senses and if your enemies somehow get around his defenses, Beast can Leap/Climb away to safety (and hopefully some healing via the X-Men team ability).

And talk about talented! Mid-dial Stealth and the Avengers team ability show how Hank is able to multi-task his time between his scientific studies, duties to the X-Men, and his new role as a member of Steve Roger’s Secret Avengers.

Beast brings a potent array of abilities and powers to any team, and with his Keywords he’s sure to be an asset to a variety of theme teams.  Be sure to add him to your collection when Giant-Size X-Men arrives in March!

That’s all we have for today, but be sure to join us later in the week for yet another exciting preview! Until then, keep those HeroClix off their K.O.’s!