Today’s preview is an X-Men legacy; her father began his career fighting against the X-Men, but when the call went out, he joined their ranks as the Banshee.  It’s only fitting that his daughter followed suit with sonic powers of her own.

Today’s preview is none other than Theresa Rourke Cassidy, the Siryn! (click image below) 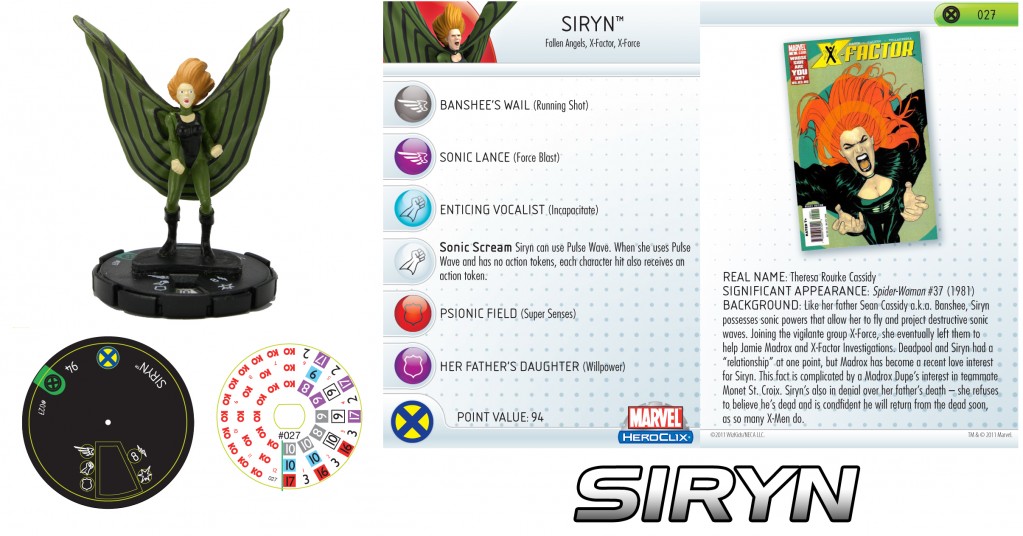 At 94 points, Siryn packs a potent punch.  Consistent combat values all down her dial combined with her power selection means you will always have options when Siryn is on the battle map.  Early-dial Incapacitate and late-dial Pulse Wave (via her Sonic Scream special power) plus an opening 3 damage means that Siryn will always have a way to deal with opposing figures with Invulnerability or Impervious, while four clicks of Running Shot allows Siryn to get in position to do the most good for your force.

Late-dial Force Blast and Willpower give Siryn the opportunity to wreak some sonic-powered havoc as well.  In playtesting, we joked constantly that any elevated terrain Siryn took “was her’s” and no one wanted to even attempt becoming adjacent to her!  But no matter your strategy, Siryn will make an excellent addition to your X-based teams!

And speaking of teams, let’s not forget the X-Men team ability, which alows you to keep Siryn in the fight! All in all, Siryn is an effective ranged combat addition to your force!

That’s all we have for today, but be sure to join us on Friday for an exclusive peek behind the curtain at a certain prestigious social club.  Until then, keep on Clixin’!