Today we enter the hallowed halls of a very prestigious social club whose membership has included a veritable “who’s who” of movers and shakers in the Marvel Universe.  However, behind the scenes there exists a secretive group known as the Inner Circle who seek to control events according to their own sinister agenda.

Our first preview today is none other than the Black Bishop himself, Harry Leland! (click on image below) 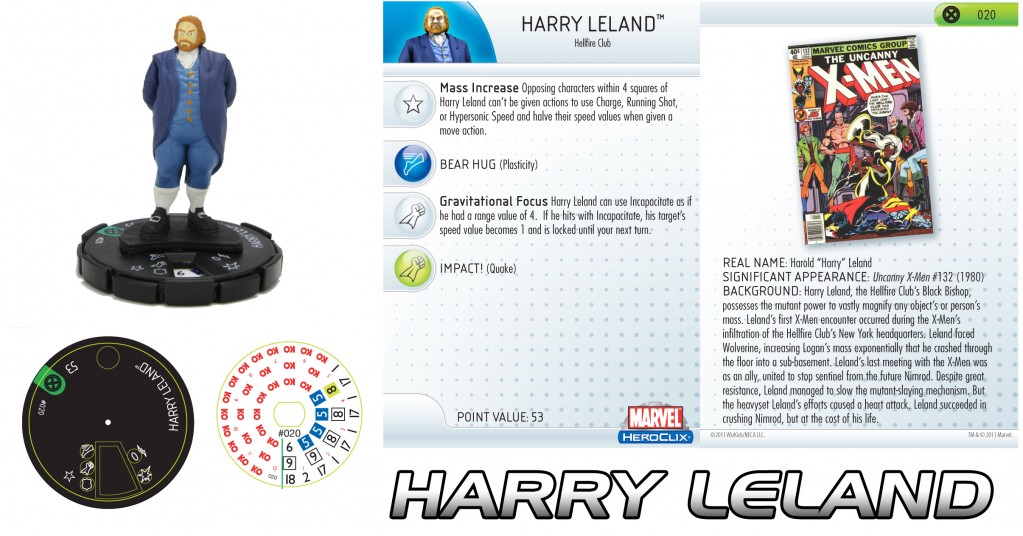 Harry Leland’s mass-affecting powers are definitely in full force on this dial.  Let’s look at that Trait first; Mass Increase effectively shuts down Charge, Running Shot, and Hypersonic Speed on any opposing character within 4 squares! And if they try to move outside of the area of effect, they’re doing it at half speed.

Then there’s Leland’s Gravitational Focus special power which allows him to use Incapacitate within 4 squares as well.  If that weren’t bad enough, a successfully hit target has their speed value reduced and locked at 1 until your next turn!

Individually both abilities are useful, but combined they make manuevering nigh-impossible for your opponent’s figures.  And while Leland’s own speed value isn’t all that high, getting him into position to do the most damage won’t be that difficult as his lower point value ensures you have plenty of room on your force for some heavy hitters and characters capable of carrying Leland around.

But what if someone tries to take Leland out? Well, with so much potential battlefield control it’s inevetiable that someone will try to K.O. Leland.  His higher defense helps initially, but if you pair him up with the Hellfire Club Guard, his chances get much better! (click on image below) 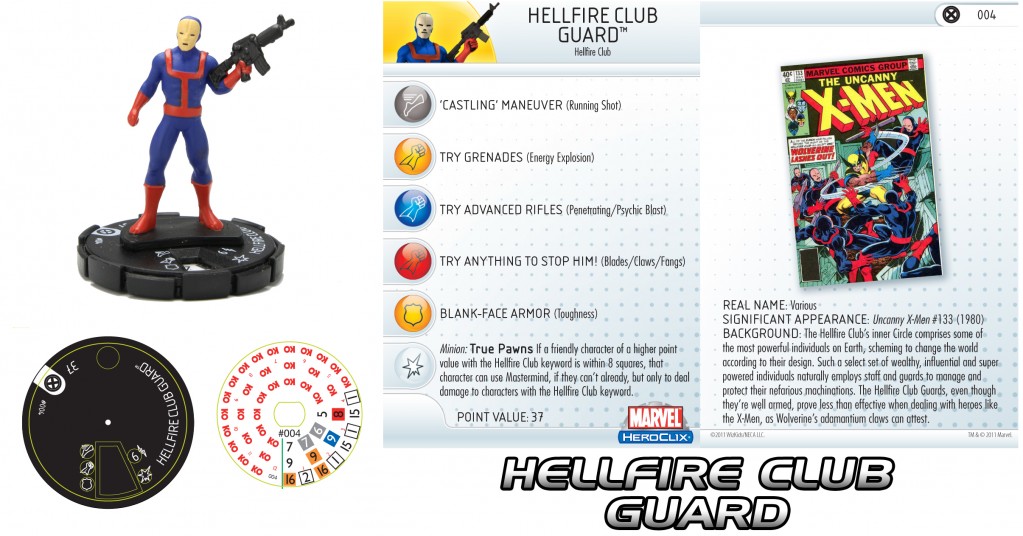 The Hellfire Club Guards (or HCG’s) are definitely what you may have come to expect from a Minion-style figure; short dial with some offensive combat potential.  However, what makes the HCG really shine is their ability to confer Mastermind upon any friendly figure with the Hellfire Club keyword and a higher point value.

So say someone attacks your Leland or another Hellfire Club keyworded figure.  No worries with the HCG on hand;  just shunt the damage off to another Hellfire Club figure, or the HCG themselves.  The opening clicks of Toughness help the HCG’s absorb some damage before being removed hopefully, but if not, no matter.  After all, you’re only sacrificing pawns.

Thanks for joining us for these latest previews.  We hope you’re enjoying them and are as excited for Giant-Size X-Men as much as we are!  Be sure to check back with us next week as we preview two brave fighters who excel at fighting horrible monsters.  Until then, keep those dials off their K.O. clicks!