Days of Future Past

Today’s special bonus preview highlights one of the X-Men’s most persistent and dangerous foes.  Built originally by the (*ahem* mad) Trask family, the Sentinels have long plagued the X-Men and mutants everywhere.  We are very pleased to present the first of the Super Booster previews, the Mark II Sentinel! 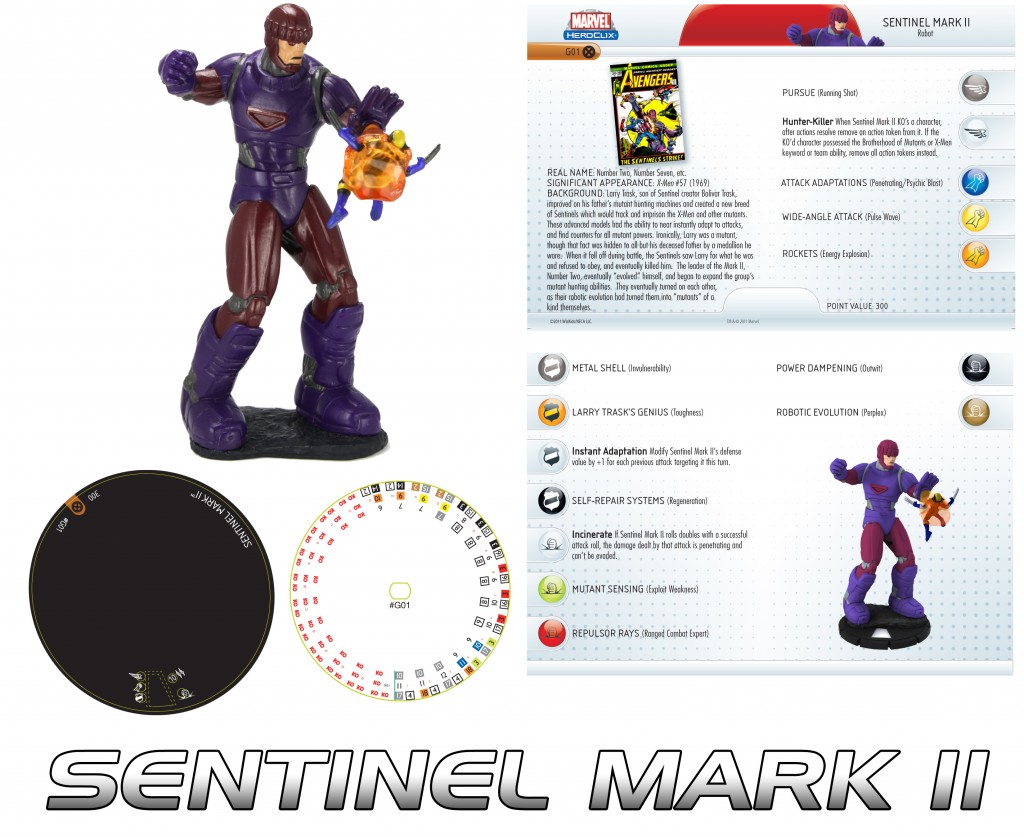 That’s right, the Sentinels are back and they’re not taking any prisoners!

As you can see, the Mark II is outfitted for a variety of mission profiles with a very consistent combat dial and aggressive power selection: Running Shot, Psychic Blast, Ranged Combat Expert, Pulse Wave, Outwit, all of the staples (and more!)  for a colossal killer-robot are there.  However, what really makes the Mark II Sentinel an effective adversary is some very cool special powers.

Hunter-Killer rewards the Mark II whenever it K.O.’s an opposing figure with the X-Men or Brotherhood keywords or team abilities.  While the Mark II Sentinels will hunt any mutants, they are specifically programmed to sanction these threats and the special power reflects that.

Incinerate demonstrates just how dangerous the Mark II Sentinel can be.  Roll a successful hit against its target with doubles? Instant penetrating damage that cannot be evaded.  If that doesn’t spell trouble for your opponent’s X-teams, I don’t know what will. 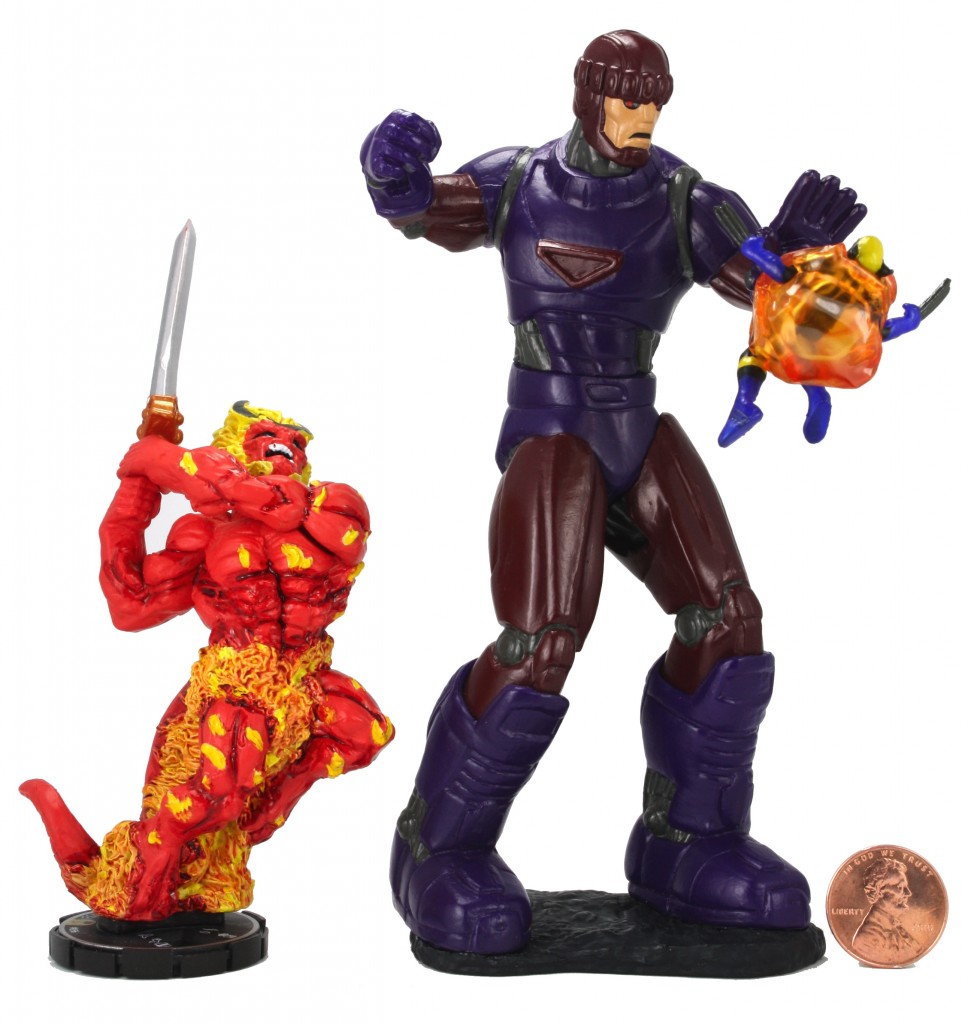 The Mark II Sentinel towers over the battlefield as a  colossal figure (awww, look at Surtur.  He’s so cute)  but don’t worry, it’s armored hide is set to protect it from all manner of attacks.  The Mark II is set up with Invulnerability, Toughness,  Regenerate (for those pesky self-repair systems) and lastly (but certainly not least) the Instant Adpatation special power which increases the Mark II Sentinel’s defense value each time someone takes a shot or a swing at it.

The Mark II Sentinel is primed for the hunt, and its armed appropriately for the task (as its sculpt will attest.  Alas, poor Wolverine!) but if you prefer your Mark II to appear less preoccupied, simply remove the energy blast from the Mark II Sentinel’s hand: 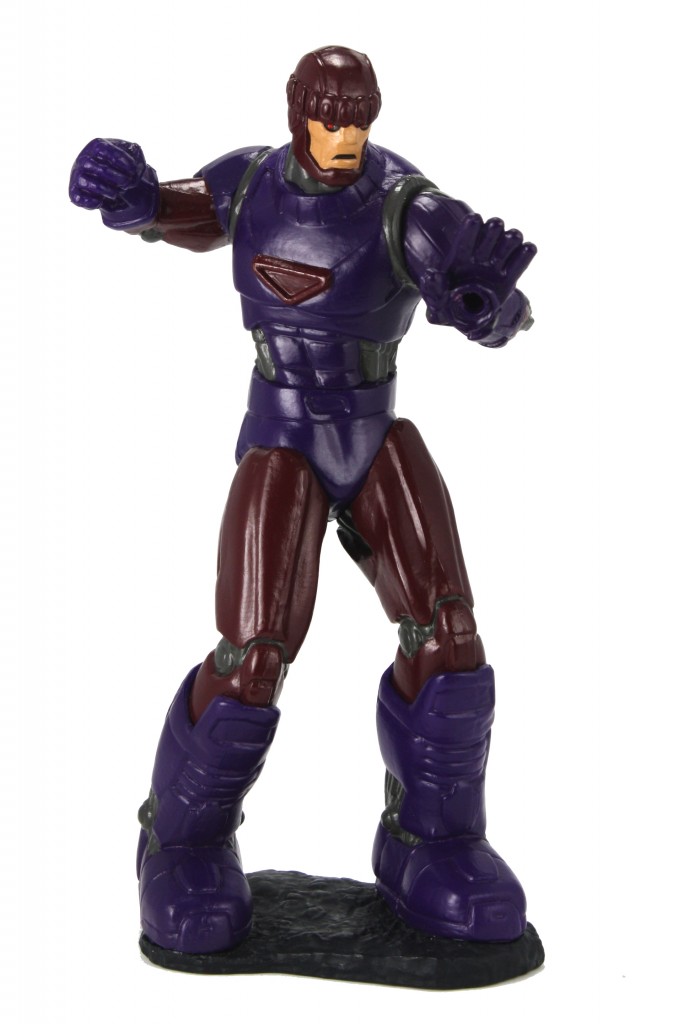 We hope you’ve enjoyed this special bonus preview.  Stay tuned as we have more exciting previews later this week, and be sure to check out your local gaming store for all of the x-citing Giant-Size X-Men action next month!  Until then, keep on clixin’!