As promised, today we examine some of the other members of that satirical and odd super-group, Nextwave.  We’re going to start off the day with the former Captain Marvel-turned-Photon-turned-Pulsar, Monica Rambeau! 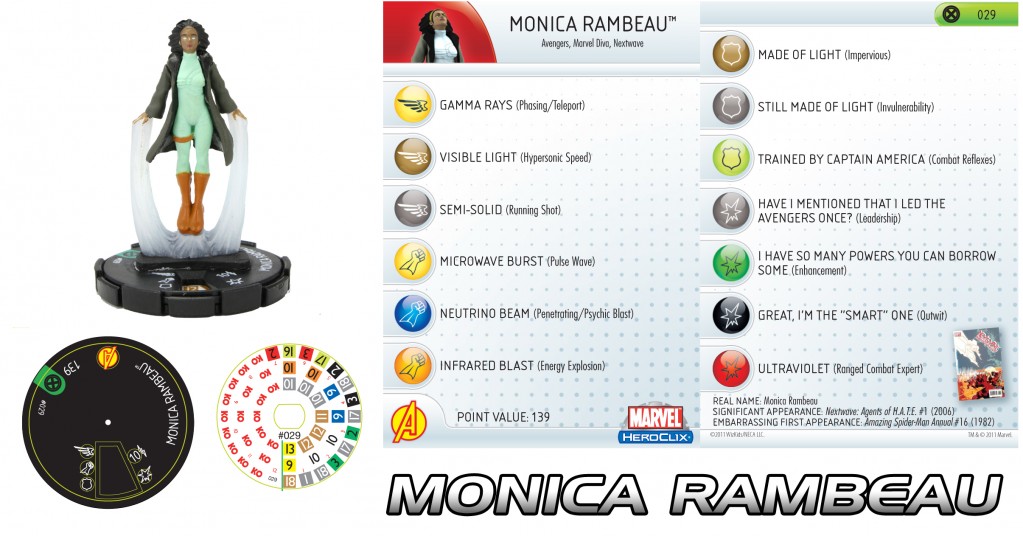 As you can see, Monica’s got a very useful array of powers and combat values.  A dial full of mobility thanks to Phase/Teleport, Hypersonic Speed, and Running Shot helps to get Monica where she’ll do your force the most good, while an array of offensive combat powers such as Pulse Wave, Penetrating/Psychic Blast, Energy Explosion and Ranged Combat Expert and a 10 range keeps your foes at bay.

That’s not all though! Monica’s got some useful support powers like early dial Leadership (she did lead the Avengers after all), Enhancement, and Outwit.  Her light form keeps her safe from most harm with some Impervious and Invulnerability and some end-dial Combat Reflexes shows her melee prowess (thanks to some training with Captain America himself!).

Monica Rambeau is a great ranged combat addition to most strategies and teams.  Speaking of teams, let’s check in with another Nextwaver with a penchant for multiple monikers, Tabitha Smith! 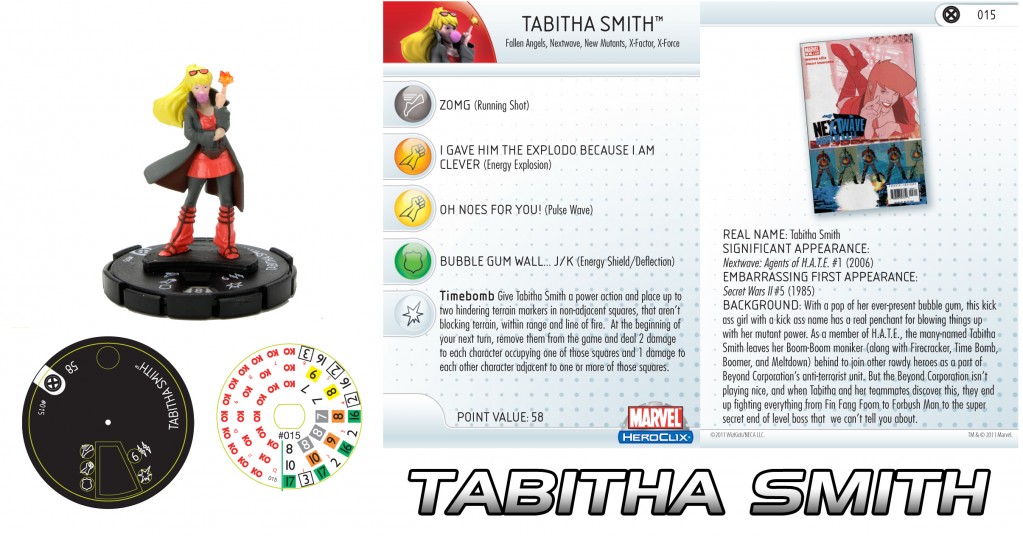 At just 58 points, Tabitha is the least expensive of her Nextwave teammates but no less effective on the battlefield! With very consistent combat values and two targets at 6 range, Tabitha’s got a solid foundation to support her team as a secondary or tertiary attacker.

Tabitha’s Timebomb special power is a great representation of her super powers in the comics and allows you to set traps or blow up those foes who won’t keep their distance! Did your opponent foolishly place or push their figures near Tabitha? Reward them with a Timebomb!

Solid combat values, a great power selection, and a low cost makes Tabitha Smith a great asset to many force-builds and strategies.  Now if she would only stop talking like a LOLcat we’d be all set!

That’s all we have for today but join us later this week as we finish up our Nextwave previews! Until then, keep on clixing!