Accents and Androids – Nextwave is Coming!

Today’s previews should come as no surprise to all of our Nextwave afficianados out there.  We’ll start the day off with a machine man with a penchant for organizing sock drawers, Aaron Stack! 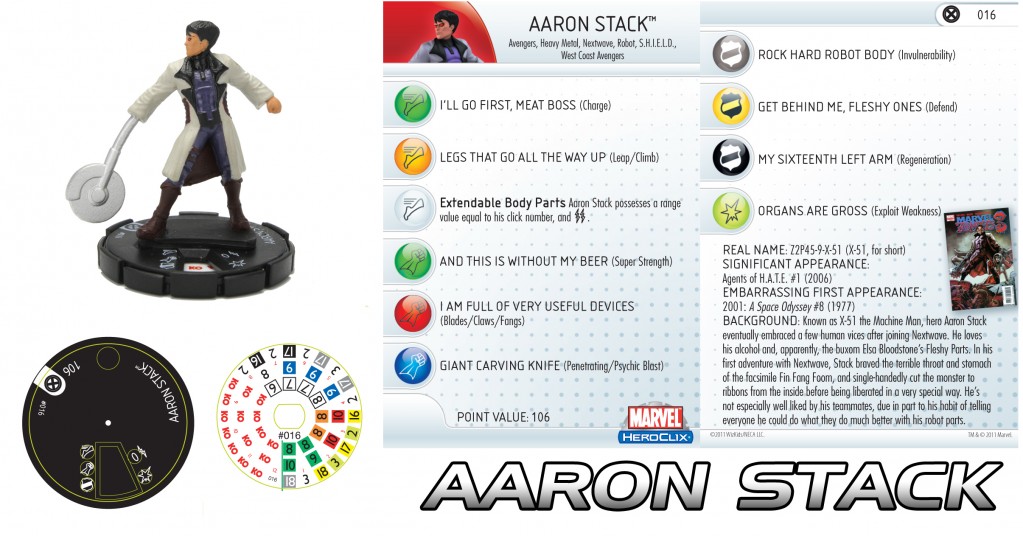 Aaron Stack is a veritable tool chest of useful powers and abilities.  He starts off with with some great close-combat capabilities thanks to early-dial Charge and Super Strength.  After the first couple of clicks, Exploit Weakness and Blades/Claws/Fangs demonstrates how effective Aaron is in melee against the “Fleshy Ones”.

Mid-dial Leap/Climb allows Aaron to get where he’ll do the most good for your force, and sets him up nicely for his Extendable Body Parts special power which allows him to make ranged attacks with a range value equal to his click number! Combine that with some Penetrating/Psychic Blast and Aaron makes an exceptional secondary range attack piece.

Alternating between Invulnerability and Defend, Aaron Stack is able to mix it up with opposing figures as well as help protect his teammates, while late-dial Regenerate allows Aaron to get bck up to his mid-dial for more “useful devices” action!

Lastly, Aaron Stack’s keyword selection enables him to theme on a variety of great teams which only increases the usefulness of this utility piece.

Next up we have the focus of Aaron’s obsession and Tabitha Smith’s teasings, Elsa Bloodstone! 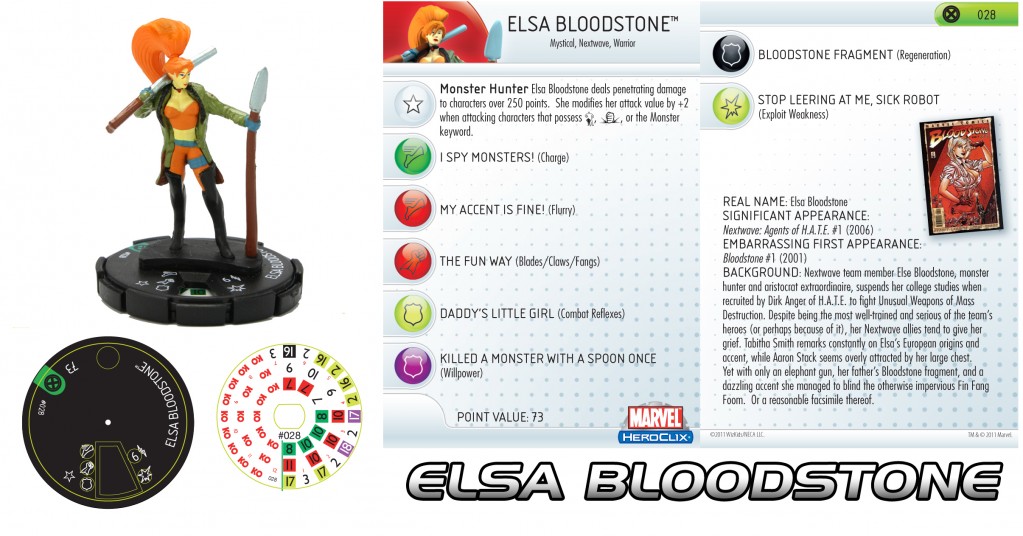 As you can see, Elsa is an expert at battling monsters and a dangerous close combatant.  Her Monster Hunter trait allows her to deal penetrating damage against figures who’s point values are more than 250 pts, while her attack value gets a +2 boost versus giant and colossal figures or figures with the Monster keyword.   Talk about a deadly accent!

The fun doesn’t end there though.  Early-dial Charge and Blades/Claws/Fangs demonstrates Elsa’s mastery of combat techniques while Combat Reflexes reflects her many years of training.  Mid-dial Willpower gives Elsa the opportunity for that extra push, whether it be to shoot a monster in the face or attck it with her trademarked spade.

Late-dial Flurry and Regenerate both keep Elsa in the fight, and her very consistent combat values ensures Elsa will be a threat to opposing figures no matter where she is on her dial.  And while Elsa doesn’t have as many keywords as her android admirer, she will certianly find her way on  number of theme teams designed to maximize the effectiveness of her accent, er, combat abilities.

Aaron and Elsa wrap up yet another week of Giant-Size X-Men previews, and I hope you’ve enjyed them as much as we.  Next week we tax our travel agent as we venture to the Australian Outback and the Dark Dimension.  Until then, keep your figures off their K.O. clix!