Today we have a triple threat preview for you all.  Hailing from a secret base in the Australian Outback, hidden underneath the abandoned town of Cooterman’s Creek, the Reavers struck out committing violent crimes all over the world.  We start our preview off today with Pretty Boy! 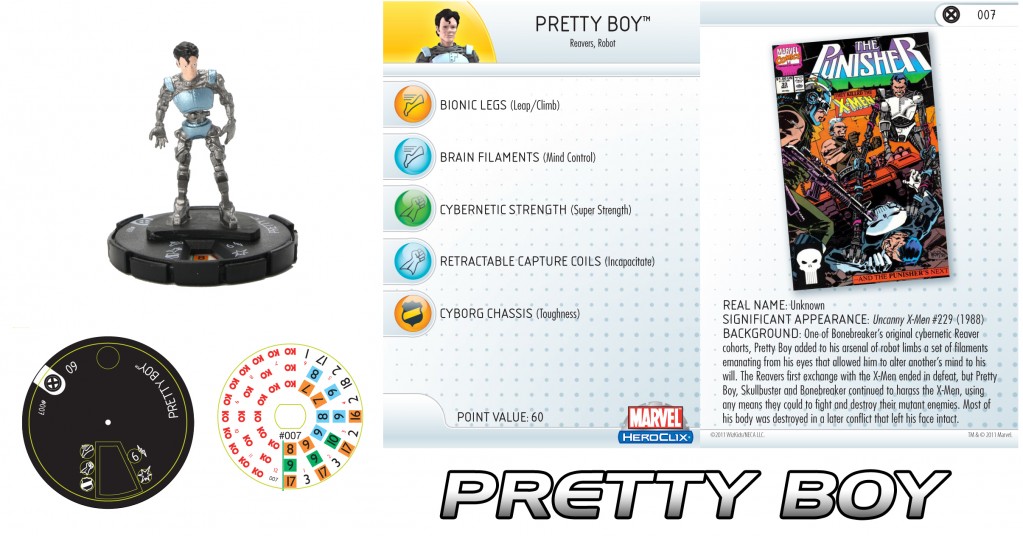 Appearances are definitely deceiving when it comes to Pretty Boy.  At first glance Pretty Boy may look like a mid-range thug but as you get past the sneer in his veneer, we see that he is a deadly adversary indeed.  Very consistent combat values throughout his dial and the Indomitable ability mean Pretty Boy will almost always be ready for a fight, and his power selection is very handy as well! Early and late-dial Leap/Climb allow you to position your Reaver where he’ll do the most good (bad?) while Super Strength allows Pretty Boy to grab an object while he’s manuevering around your foes.  Base one and swing that object at them or, better yet, if you’re on that third click Mind Control them instead and have them attack their former allies!

Late dial Incapcitate and a high defense ensure that Pretty Boy won’t be an easy target even as his ability to deal damage diminishes (how’s that for alliteration?).  All in all, Pretty Boy is a very effective 60 points!

Next up we have the original Skullbuster! 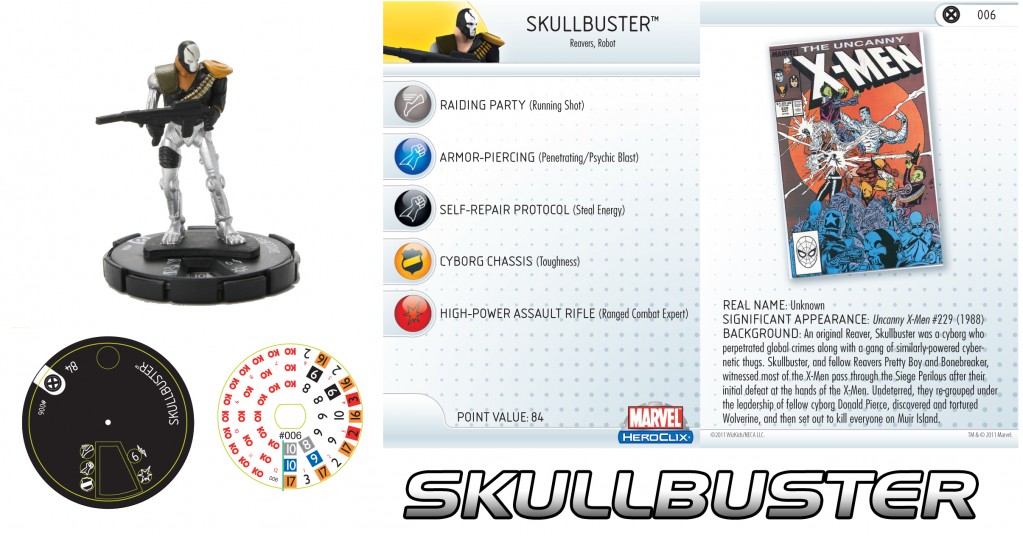 And no need to worry about taking damage of his own; Toughness down his entire dial protects him from some harm, while late dial Steal Energy allows Skullbuster to repair himself and get back onto those dreaded mid-dial clicks!

Aggressive combat values, an efficient power selection, and the Indomitable ability all make Skullbuster an effective and attractive (despite that intimidating mug of his) addition to your force.

Next up, we have the “leader” of the nefarious Australian Reavers, Bonebreaker! 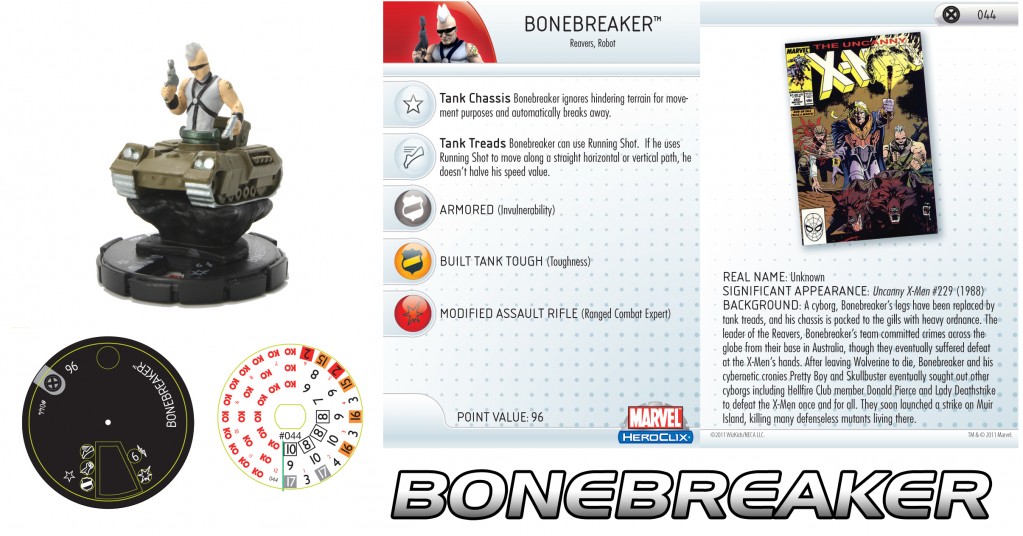 Bonebreaker is an imposing piece for less than 100 points.  His Tank Chasis trait allows him to roll over Hindering Terrain with ease, and breaking away is a snap! (see his tattoo).  Bonebreaker’s Tank Treads special power also enables him to perform a full move Running Shot so long as he moves in a straight line, allowing for even greater map control as you force your opponent’s figure sto hide behind cover.

Bonebreaker’s armored hide protects him from most damage as Invulnerable gives way to Toughness, but if he does take some damage your opponent will swiftly wish they had left this Reaver alone! Late-dial Ranged Combat Expert will definitely be useful as Bonebreaker blasts your foes for 4 damage from afar.

And like his Reaver compatriots, Bonebreaker’s consistent combat values and Indomitable ability allow for some great strategic and offensive force builds.  On March 16th, be the first to raid your opponent’s force with Pretty Boy, Skullbuster, and Bonebreaker!

That’s our preview for today and I hope you’ve enjoyed this hat trick of cybernetic badness as much as we! Join us next week as we check in with some of  Apocalypse’s favored minions, and perhaps a surprise or two.  Until then, have  great weekend everyone and keep those Clix off their K.O.’s!