WAR! What Is It Good For?

Some of you may have already caught the exclusive ClixCast preview of our latest GSX offering and if not, why not? Follow the link and listen to a great podcast about this figure!

Ok, now that you’ve done that without further adieu, here is the second Horseman of Apocalypse , WAR aka the Hulk: 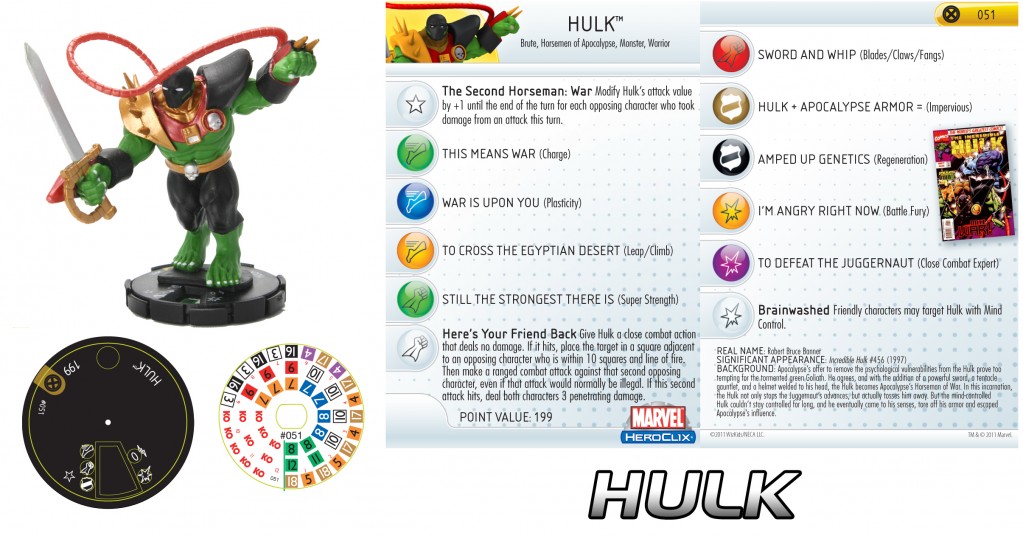 Hulk brings a hearty helping of “oomph” to any force with very aggressive combat values and a power selection that will make even the most confident opponent think twice! Hulk’s early dial is what you my expect as he opens with both Charge and Super Strength, and if that wasn’t enough, the Hulk has a  5 damage value as well.  Charge gives way Plasticity as Hulk manuevers to keep opposing figures locked down in adjacency, and Super Strength becomes a very cool Special Power, Here’s Your Friend Back.  This special power allows Hulk to target an adajcent opposing figure with an attack that deals no damage, and then Hulk can “swing” that figure at another opposing figure within 10 squares.  If Hulk hits with the second attack roll BOTH figures take 3 penetrating damage!

Hulk is protected by dense musculature and armor, which is represented by Impervious on his dial (six clicks worth!).  Hulk’s late-dial is no less impressive;  Plasticity and Hulk’s special power give way to Leap/Climb and Blades/Claws/Fangs, while Impervious becomes Regeneration.  Also, Hulk gets another incredible special power, Brainwashed, which allows friendly figures to use Mind Control against the Hulk (which is a great way to get him to Regenerate).

Hulk is an excellent representation of his times spent as a Horseman of Apocalypse, and is a potent addition to any force.  His keywords make him very easy to fit on a variety of theme teams (despite his cost) and his Indomitable ability ensures that you will almost always have the option of acting with him.

Some of you may be wondering why we waited to put this preview up. We thought it would be awesome if the good folk who work so hard on ClixCast enjoyed the exclusive for a little.  We hope this Hulk has been worth the wait, and we look forward to sharing some more Horsemen goodness with you this week! Until then, keep on clixin’ everyone!