Today we have another double preview for all of our Giant-Size X-Men fans.  We start off our preview with a Horseman who has held two titles serving Apocalypse, Caliban! 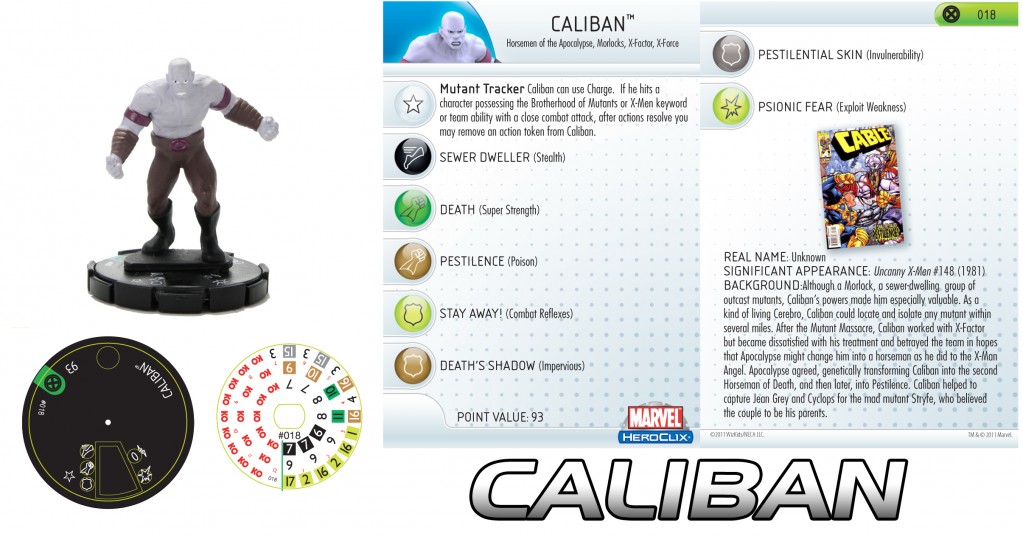 As you can see, Caliban brings quite  variety of powers to the battlemap.  His early dial represents his time spent living under New York City as a member of the Morlock community with Stealth representing his penchant for staying in the shadows, and Combat Reflexes demonstrating his wiry ability to avoid being captured.  Exploit Weakness represents a lesser known aspect of Caliban’s power, which was to absorb and re-direct Psionic Fear upon his targets.

Mid-dial, Caliban switches to his first Horseman persona, that of Death, with a jump in his damage and attack values along with the inclusion of Super Strength to demonstrate his amplified physique.  Caliban also trades his Combat Reflexes for a denser hide in the form of Impervious.  And after a brief stint as Death, Caliban trades roles to become the new Pestilence and his powers adapt accordingly.  At this stage, Caliban adds Poison and Invulnerability to his arsenal.

That’s not all though! Throughout Caliban’s dial he benefits from his Mutant Tracker trait which allows him to use Charge.  Even better, if his target has the Brotherhood of Mutants or X-Men team ability or keywords, you may remove an action token from Caliban once the action has resolved!

Next up, we have Caliban’s successor as the Horseman Death, Wolverine!

As you would imagine, Wolverine is a deadly close-combatant as Death.  His early-dial is chock full of dangerous powers like Death Comes Swiftly special power which enables Wolverine to use Charge and Flurry.  Combine that with Exploit Weakness and a respectable damage value of 3, and Wolverine is ready to dish out some hurt!

After his first click, Wolverine adds Steal Energy to his arsenal lowing him to potentially heal back up to his first click.  He switches to his trademark Blades/Claws/Fangs mid-dial for some swordplay while  Toughness keeps Wolverine safe from some harm as his armor absorbs some of the damage from opposing attacks.  Late dial Wolverine picks up Regeneration and the Brainwashed special power.  Don’t want to spend your action regenerating Wolverine? Field a friendly piece with Mind Control and have them do it for Wolverine instead!

And let’s not forget that Wolverine also has The Fourth Horseman: Death trait.  K.O. an opposing figure and instantly all of Wolverine’s combat values are modified by +1 until the end of the turn!

Aggressive combat values, a great standard and special power selection, and useful traits make both Caliban and Wolverine a great addition to your forces.  Pair them up with their fellow Horsemen and test your opponent’s worthiness to survive!

We hope you’ve enjoyed this latest preview, and perhaps some of you caught the advanced preview over at HeroClix Spain eariler today.  There are only 12 more days until Giant-Size X-Men releases so be sure to reserve your brick today at your local Venue! We’ll see you all again soon with even more GSX goodies, but until then keep your figures off their K.O. clix!