Today’s previews are enhanced with all sorts of combat-ready goodies.  We start the day off with an Omega Prime Sentinel-turned X-Ally-turned Marauder, Karima! 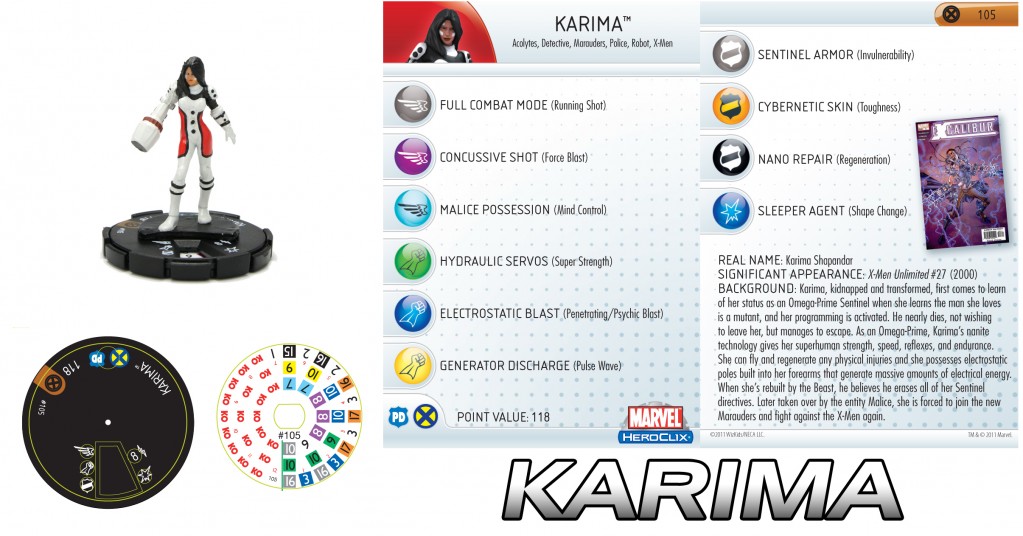 Karima is definitely ready to bring the fight to the enemy.  Early-dial Running Shot and an 8 Range allows her to move into position, and while on the way to set up the shot, Karima can pick up an object with Super Strength for an up close and personal special delivery.  Shape Change gives her that additional edge should your opponent attempt to target her, and if an attack gets past her disguise, her Invulnerability will protect her.

Mid-dial Karima switches tactics somewhat and trades Super Strength for Penetrating/Psychic Blast and also picks up some handy Force Blast to keep your foes at bay (and set them up for nice ranged attacks).  Toughness continues to afford some protection against opponents’ attacks as well.

Karima’s end-dial represents her short run as a member of the Maruaders while possessed by Malice.  She adds Mind Control to her arsenal and Pulse Wave ensures Karima remains a deadly threat.  Lastly, Regeneration allows Karima the opportunity to get back up to her early-dial.

At 118 points with consistent combat values, the Indomitable ability, a host of useful keywords and dual Police and X-Men team abilities, Karima will be a very useful addition to your X-collection!

Next up we have the time-travelling Askani’son himself, Cable! 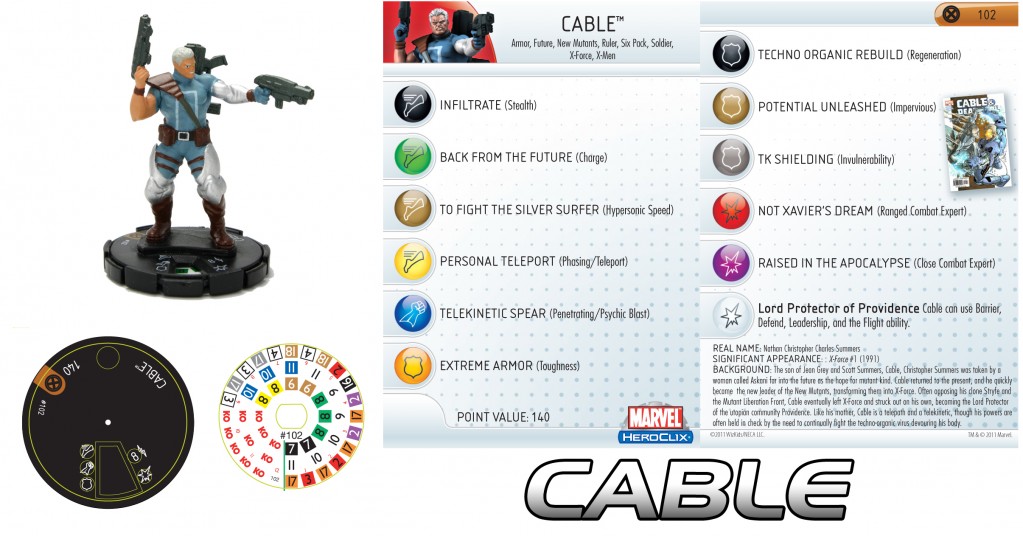 At 140 points, Cable is certainly ready to join the fight.  Striking from the shadows with some opening clicks of Stealth, Cable demonstrates his proficiency with firearms with Ranged Combat Expert.  Stealth gives way to Charge and Cable picks up Close Combat Expert as he moves in for the melee.

Early-dial Toughness protects Cable from some harm, and mid-dial Regeneration allows Cable to potentially return to his first click.  However, should Cable choose to not heal, he will find that he will undergo a fantastic transformation!

Charge gives way to Hypersonic Speed as Cable takes on a whole new persona via his Lord Protector of Providence special power which allows use of Barrier, Defend, Leadership, and the Flight ability! If that weren’t enough, Penetrating/Psychic Blast and Impervious ensure that Cable will be deadly, enduring threat on the battlemap.

Hypersonic Speed gives way to Phase/Teleport allowing Cable to continue to move freely on the map, while Impervious is traded for Invunerability on the end-dial.

Aggressive combat values and an impressive power selection makes Cable a very potent addition to any force.  And his keyword selection allows Cable to theme on a number of impressive rosters!

We hope you’ve enjoyed today’s previews as much as we.  Next up we will hand another double-preview as we preview the Giant-Size X-Men maps as well as a special bonus preview resulting from the recent HeroClix World players’ choice poll! We were pleasantly surprised to see who you selected, and we’re sure you’ll be happy with the winner as well.  Until Friday, keep those dials a-clixin’!