Today we bring you to distant lands full of mystery, intrigue, and most of all–BATTLE!

We begin our preview with none other than Madripoor Lowtown: 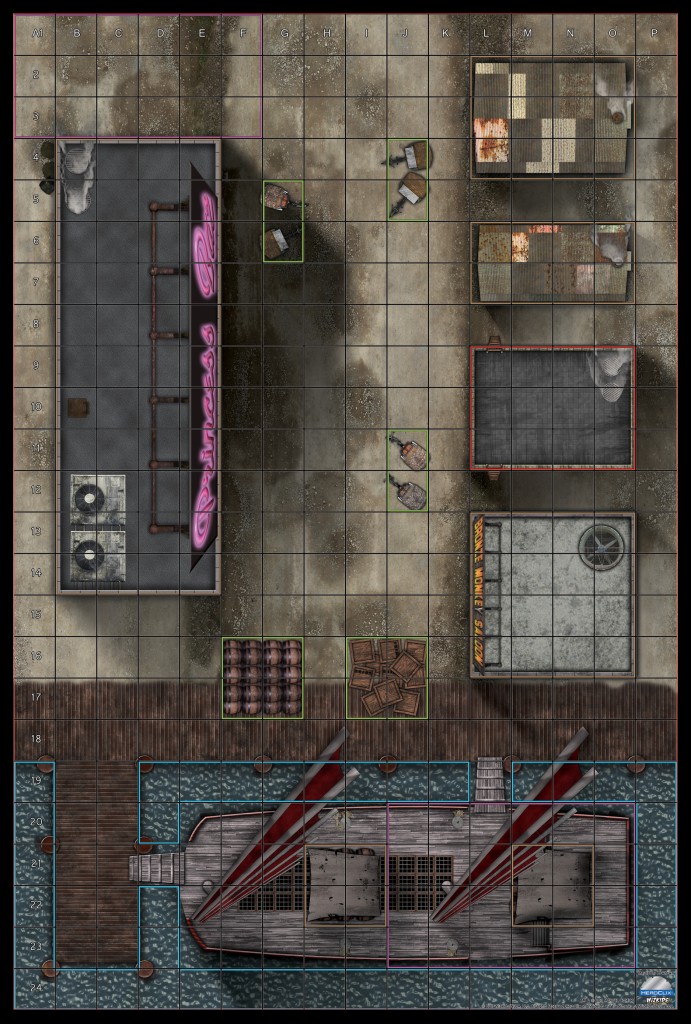 Lowtown is every bit as treacherous as its reputation would have you believe.  Narrow alleys, dark rooftops, and mysterious ships docked on the waterfront all add to the ambience of this remote and deadly city.

Starting areas can be found in opposing corners of this map and both benefit from cover provided by blocking terrain.  From there, teams will have to navigate between buildings (such as the infamous Princess Bar) as well as manuever around hindering terrain such as rickshaws and cargo piles.

With all of the non-clear terrain on this map, your figures  may have a difficult time drawing an unhindered Line of Fire against opposing pieces more than a handful of squares away (especially if the targetted pieces have access to Stealth).

With only one rooftop providing elevated terrain, fighting may be fierce for the high ground as your forces compete for a (somewhat) less obstructed view of the battlemap.

And while there is some aquatic terrain on this map, players need not concern themselves too much with Atlantean invaders.  (That is, unless those same aquatic warriors bring along some special objects that bring the water terrain inland, know any?)

Of course, close combat pieces will feel at home in the rough and tumble alleys of Lowtown, where brawls and melees are as common as dark deals.  Madripoor Lowtown is situated perfectly for charging into adjcency against opposing figures!

Next up, we have the sentient and deadly island-foe of the X-Men, Krakoa: 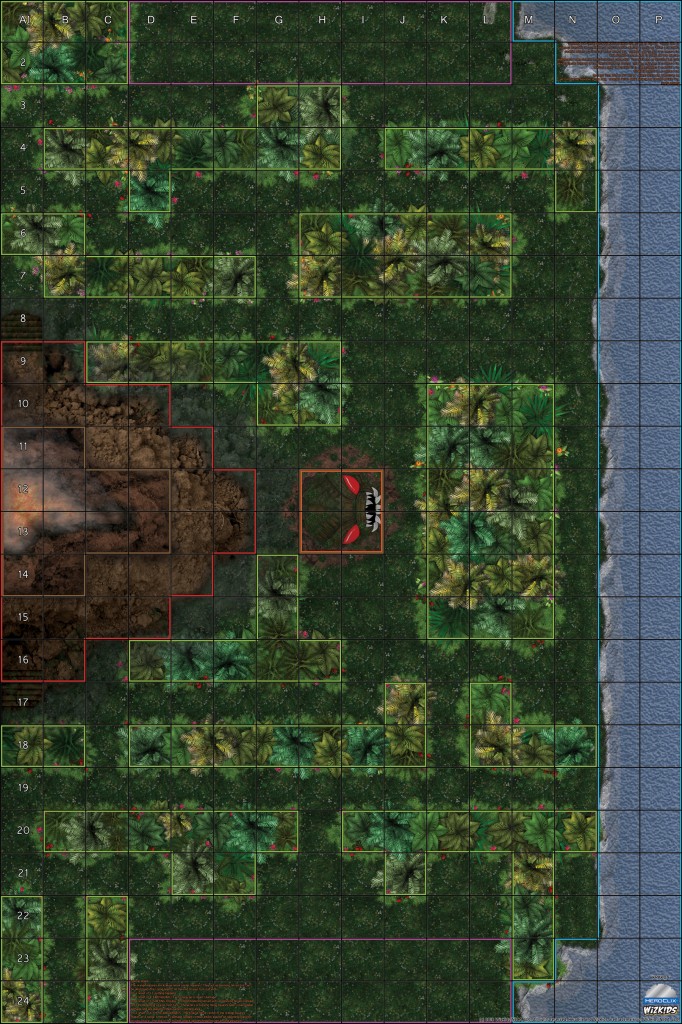 Krakoa’s beauty is only matched by the danger! This island paradise hides a sinister secret beneath its lush, tropical facade.

Special Rules:  The orange squares are Krakoa nerve center squares.  They act as blocking terrain but can’t be destroyed.  “The Living Island”:  At the end of your turn, roll a d6.

On a result of 4: EARTHQUAKE.  Each character is dealt 1 damage.

On a result of 5: SHIFTING FOLIAGE.  Printed hindering terrain acts as blocking terrain instead until the beginning of your next turn.  Characters occupying those squares take 1 unavoidable damage and are placed in the owner’s starting area.

On a result of 6: THE ISLAND AWAKES.  The Krakoa nerve center in the orange squares makes an 8 range, 10 attack, 3 damage ranged attack against an opposing character of your choice.  The line of fire for this attack ignores hindering terrain and elevation.

Krakoa is definitely a dangerous battleground in the Modern Age tournament environment, but it’s even more so in the Golden Age environment.  Play the Krakoa the Living Island Battlefield Condition and the danger increases even more!

This BFC from Mutations and Monsters states: “Once at the end of each player’s turn, he or she can choose a target opposing character adjacent to an unoccupied square of outdoor hindering, blocking, or elevated terrain, and make an attack roll with an attack value of 9 and a damage value of 2 against the target; the target can’t be knocked back by the attack. If the attack succeeds but the character target takes no damage from the attack and has zero or one action token, give the target an action token.”

Combined these two elements will make for a very interesting game for you and your opponent as you not only battle it out against each other, but against the island itself!

That wraps up our Giant-Size X-Men map previews.  Join us later as we check in with the winning result of the recent HeroClix World Players Choice poll!