Rulebook 2011 – Terrain and Lines of Fire

We are stepping our way through a variety of new mechanics that the 2011 HeroClix Rulebook introduces and today’s topic is terrain. Of all the changes in this new rulebook, I think this is one of the smallest changes that has the most dramatic impact.

HeroClix is one of the “flattest” games you can play. There’s grounded. There’s elevated. And…. That’s it. Maybe, just maybe, you are playing “old school” and you are using soaring rules and you get a third level.

Is it really believable that in all of the maps that we’ve had in HeroClix that all of the buildings and mountains and such have all always been the same altitude? The game needed… more.

Before we get to that, let’s talk a moment about stairs and ladders. Having 2 different means of changing elevations that behaved differently was a complication for the game that it was felt was just not necessary. So the rules for stairs and the rules for ladders are being combined. The two squares that share an edge between two elevations that allow for a character to move between them now follow a single set of rules: 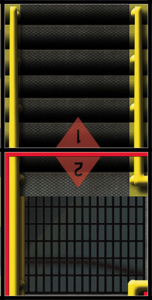 That’s it. There is no “pseudo-adjacency” for stairs that doesn’t apply to ladders. There will be no question which two squares one must go through to change elevations. One set of rules for stairs, ladders, and any other means of changing elevation. Here’s a sample of what you may see on an upcoming map.

This looks a little different from what you usually see. While you can see the way a character would move up from grounded to elevated, and you can see the usual red boundary line that indicates elevated terrain, you also see a “1” and a “2” in triangles. What’s that about?

With the 2011 rulebook, we introduce elevated terrain. Oh, wait. We already have elevated terrain. So what we’re bringing you is the ability to establish a “height” to that terrain. On maps with more than 2 elevations, we are going to be using small triangles where you change elevations so that you know just how high up your character is.

Does this mean all of your current maps are invalid/unplayable? Not at all. Maps that do not use elevation level triangles follow all of the current rules of HeroClix – you just treat the grounded terrain as “level 1” and the elevated terrain as “level 2”. There’s no need for the numbers when there are only the two levels.

If you are already familiar with lines of fire and the way that elevation factors into the equation, learning to use multiple levels of elevation is relatively simple. In fact, in terms of 2 elevations, the rules are the same. Simply replace “grounded” with “a lower elevation” and replace “elevated” with “a higher elevation” and all of the same principles apply. 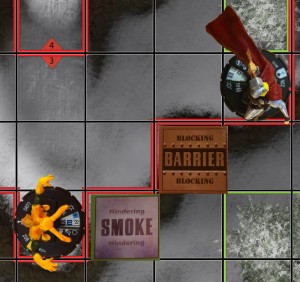 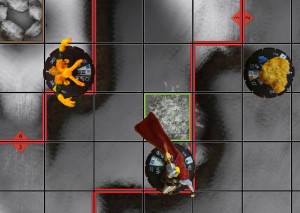 The line of fire between Enchantress and Loki travels between levels 2 and 4. That line of fire will be blocked by any terrain that is higher than level 2 except for the square the target occupies. Level 3 is higher than level 2, so it blocks the line of fire. The map we are previewing here doesn’t have any “cliffs” to show this, but there will be maps where you will have, for example, a level 1 square sharing an edge with a level 3 square. While there would not be any stairs or ladders allowing you to “jump” levels like this (though Leap/Climb and Fliers could), the line of fire between those levels would be clear.

When Armor Wars released the first 2’x3’ map, we were introduced to our first indoor/outdoor map. From the beginning there have been questions and issues with how lines of fire outdoors interacted with indoor terrain. Could two characters that were outdoors draw a line of fire to each other over indoor terrain? Could you draw a line of fire from outdoors to indoors? Vice versa? Do the walls of the indoor terrain count as walls that could be destroyed or were they more like the edges of elevated terrain and couldn’t be destroyed?

So, with the new rulebook, a lot of this gets cleared up. Firstly, the walls that make up the edge of indoor terrain can definitely be destroyed. Secondly, indoor blocking terrain (and consequently, indoor walls) is considered to exist at all elevations. This is different from outdoor blocking terrain which will only exist at the elevation of the terrain.

All of this talk of elevation levels has a dramatic impact on [Giant] and [Colossal] figures. But that will be in the next preview when we start the Powers and Abilities Card.

Explaining the direction that a figure being knocked back goes has always been easy – when the line of fire is along a specific horizontal, vertical, or perfect diagonal line. It’s the odd angles that always led to questions. Since HeroClix only uses “squares” to represent distance, when players are told that the path must be in the “furthest” direction, that would always lead to knock back directions that don’t communicate the flavor of being “pushed away” as knock back is supposed to.

For this years’ rulebook, we started with the challenge of how to define the choice of directions so that it is clear which of the directions are truly “away” from the attacker. In a moment of clarity, the question was raised – “what if there isn’t a choice?” Could we find a way to word the knock back path so that it was always clear which square the knock back path leads to?

Here’s a diagram that shows the various things that are being described in this paragraph: 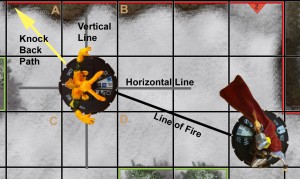 Thor has hit Loki and rolled doubles, so there is knock back. Obviously, the line of fire is not on a vertical, horizontal or perfect diagonal, so we need to figure out the knock back path. The first instruction tells us that it “follows the diagonal line”, so there are only 4 choices for that (labeled A, B, C, and D). Next, we’re told that they have to be on “the opposite side of the target from the attack” – that narrows the list of choices to A and C. Lastly, the instructions say “in both the vertical and horizontal direction” – the grey lines illustrate the “vertical and horizontal” lines that are being implied by this. There is clearly only one square that is opposite from the attacker in both directions – square A – and that is the path that the knock back will follow.

Okay! That’s a lot to take in for one day. Next time we’re going to start on the Powers and Abilities Card and see how these multiple levels of elevation influence characters that are a little… taller.