We’ve covered the exciting changes of the new HeroClix Core Rulebook and today we’re going to start taking a look at the new Powers and Abilities Card.
Combat abilities are abilities that characters are able to tap into through their combat symbols. The mapping of symbols to abilities has not changed by very much, although the combat symbols relating to Giant and Colossal characters got “juggled” a little in order to bring similar mechanics into one ability.

As far as changes go, we’ll review the change made to Move and Attack and then get into how the new rulebook changes the way you’ll be playing Giants and Colossals.

This combat ability as it read now is a series of exceptions. In an effort to line it up with Hypersonic Speed, the use of full range has been removed from this ability. It now reads “This character can use Hypersonic Speed if it is not adjacent to an opposing character when given the power action, but it’s attack value is modified by -2.”

If you read through the Powers and Abilities Card from the Blackest Night starter, you’ll see that Colossal Size and Giant Size overlap in many of their mechanics. Any time a question came up regarding a Giant character, the inevitable same question would come up to confirm if it was also true for Colossal characters.
We’re going to dive into the nitty-gritty here for lines of fire and how they work with Giant and Colossal characters. This explanation is not intended for the new or casual player, but we like to be perfectly clear when we introduce something new, as it cuts down on questions later. The basic rule is: they behave like you’d expect, and they are “taller” than any outdoor terrain features.
With the 2011 Powers and Abilities Card, we are now granting both

combat symbol are smaller than those with the

combat symbol who are smaller than ones with the

symbol. This ability can’t be countered.

A lot going on there, let’s break it down:

This character can’t be knocked back. This is easy. If you’re a giant character or a colossal character, knock back is not happening. Period.

When this character makes a close combat attack, it may target characters on higher elevations. This is also just the way things are now, though it’s restated a little bit in order to account for the possibility that the map you’re playing on has multiple elevation levels. With this phrase, a Giant on level 1 would be allowed to close combat against a character that was on elevation level 4, as long as they are adjacent (or within 2 squares, but that’s the next ability)

This character ignores the effects of hindering terrain, elevated, and outdoor blocking terrain on movement and can move through squares adjacent to and occupied by smaller opposing characters. Movement is easier when you’re big. Although this ability does not grant automatic break away, once a giant or colossal character is in motion, they aren’t being stopped by most terrains nor do opposing characters halt their movement. There are only 2 things that can prevent their movement – indoor blocking terrain (which includes indoor walls) and characters that aren’t “smaller”.

combat symbol are smaller than those with the

combat symbol who are smaller than ones with the

symbol. This sentence explains relative size in HeroClix. With this, the only character that would prevent a

from moving is another

characters as well as

characters cause movement to stop. This relative size also influences lines of fire. A

can draw a line of fire though a

, but won’t be able to draw one through another

character, on the other hand, would have their line of fire blocked by either another 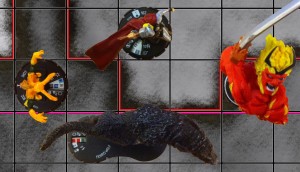 When Loki tries to draw a line of fire to Surtur, he’ll run into a problem. Although he can choose any elevation when targeting a Great Size character, any elevation he chooses ends up blocked by the level 2 terrain along the line if fire. For example: 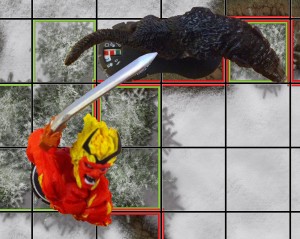 On the other hand, if Fenris Wolf were to draw a line of fire to Surtur, even if he drew it from level 4 to level 4, the line of fire would still be hindered because Surtur is occupying hindering terrain.

The Rest of the Giant and Colossal Abilities

With Great Size bringing everything they had in common together, new abilities were designed to distinguish the

Everything for Giants stays pretty much the same. A bit of a bonus as their ability to use Carry is now only limited to move actions, the number of tokens is not an issue. It is worth reminding people that the Carry ability can only be used by Giants during a move action (unless they have access to the ability through some other means). A Giant using, say, Running Shot, would not be able to use Carry when he did so.

I’m including Colossal Stamina for completeness at this point – this is nothing more than what Colossal characters can already do. It is worth pointing out that many Colossal character comes with their own rules that indicate how to handle actions after the character has been assigned two tokens. Those characters should follow their special rules instead.

Excuse me folks – I have just been reminded that it is worth pointing out that a colossal character now automatically breaks away. At long last, the nightmare of having your 300+ point character tied up by a 35 point munchkin are over! Let freedom ring! Let freedom ring!

Last point on all of the abilities for

characters – notice that all of them cannot be countered. So now, when your opponent tries to shut down one of these character’s abilities, you don’t need to research the PAC or call a judge. Trying to outwit Great Size, Giant Reach or Colossal Stamina? I’ll just say “no.”

Golly – I was thinking we’d at least get started on the new wording for some powers, but that Great Size stuff seems to have taken up all my space. I guess that will wait till next time!