Today’s article comes courtersy of the GenCon 2011 King of the Hill Champion, Stephen Plasco.  Below, Stephen shares with us all the thought and processes that went into the design of his very own Alternate Team Ability:

“After winning the King of the Hill tournament this past year at Gen Con, I knew I wanted to do something around one of my favorite comic books from when I was younger – The New Mutants.  I have always enjoyed the storylines that went along with this group and felt that as characters in HeroClix, they really did not receive enough love and attention, though GSX has certainly helped.  You would almost never see them in a competitive play environment, and they were also one of the rarer teams used with regards to theme teams.  I felt they needed a bit of a boost and an ATA might do just that.

“My original intent on this card was to have it so a character could jump in front of another character and “save” them.  In essence, when a character with the ATA was attacked, and adjacent friendly character with the same ATA could take an action token and become the target of the attack instead (regardless of the legality of the line of fire).  While this was a good idea in theory, in practice it caused a lot of rules issues and would have needed a page of errata in order for it to be used properly.  It just wasn’t feasible for it to be written as simply as I originally envisioned it.  So we simplified the effect a bit, and decided to make it function similar to Mastermind.  Also, wording it so that characters taking the damage could only use the power once per turn was getting both tricky and wordy so we decided to get rid of it.  In reality, a character with zero action tokens jumping around to save his friends twice in a row seems a bit silly, but in terms of game play,  it makes the card a little bit stronger.

“In the end, we decided to word it the way that it is now as to have no confusion on how it worked, but still capture the flavor of one New Mutant sacrificing themselves for another.

“I made a card to utilize the team (s) included correctly and in a fun way, as well as allow wildcards to use it so that it was playable in a competitive environment.  I hope that was accomplished and you all enjoy playing with it, and The New Mutants, in future games.

Thanks Stephen! Without further adieu, here is the New Mutants alternate team ability: 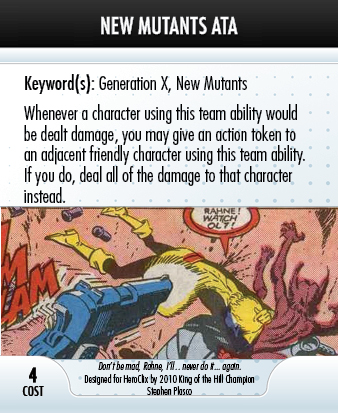 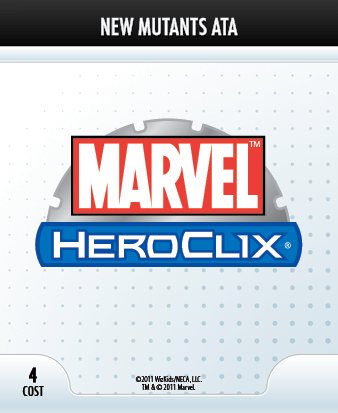 Thanks for all your hard work Stephen.  As a fellow New Mutants fan I’m very grateful and cannot wait to play this ATA at my Venue’s next tournament!

The New Mutants is our last GSX print and play article, but we will have some exciting articles in the weeks to come so stay tuned and keep on clixin’!