Today’s the day that we finally complete our summary of the new 2011 HeroClix Core Rulebook update. We’ve looked at Wild Cards, new levels of elevations, and the new rules for the bigger characters and now it’s time for the “meat and potatoes” of HeroClix – the standard powers!

I’m not going to list each and every power here. For the most part, powers have not changed. Where the powers have been altered, I’ve grouped them into 3 categories – tiny tweaks (little things that won’t alter game play by a lot), medium modifications (changes, to be sure, but just a matter of getting used to it), and  colossal changes (things that will have players taking a good hard look at how they construct their force and play the game). I’m also not going to list the text of the powers here, as this article is also including (finally) the PDFs for the Core Rulebook and Powers and Abilities Card (see below for Attachments or go to the Heroclix.com/Downloads page).

Close Combat Expert had the restrictions of using objects with it removed. It’s still a power action and it still gives you +2 to your damage, but now if you’re holding an object, you can still choose to use Close Combat Expert. If you do use Close Combat Expert while holding an object, that object you’re holding will be used in the attack. And if it is a heavy object, the +2 from CCE and the+2 from the object will combine to be +4 and that is subject to the Rule of Three, so you only get a +3 modification. Still, you could always choose to not use CCE and just use the object.

Earthbound/Neutralized – on top of changing the combat symbols of the affected character, the power now restricts the ability to use any combat abilities. If the character would normally still have a combat ability through another means, Earthbound prevents them from using it.

Phasing/Teleport – this has become a move action once again (players who have been around awhile may remember when the Avengers, Brotherhood, and JLA characters used to love Phasing/Teleport) and it now ignores characters. Ignoring character is a subtle difference from moving through/around characters, but it is important. If my Phaser is ignoring the character with Hypertime, then they are not affected by the team ability. On the other hand, when my Leap/Climber  moves through the square adjacent to an opposing character (and isn’t ignoring it) then the team ability would activate.

Leap/Climb – this has become a move action, but does not get the “ignore characters” update of Phasing/Teleport.  With Move and Attack (in the Blackest Night starter) becoming a power action instead of a move action, it had very few applications with the old wording and was causing confusion as to why it behaved similarly to Phasing/Teleport, but was worded in a very different way.

Battle Fury – this power got a few bumps to make it less of a downer. It continues to provide the same restrictions that you currently have – the character cannot be carried and can’t be targeted by someone using Mind Control. But now, the fury puts you into such a frenzy that the character cannot be targeted by Incapacitate either. In addition, a character with Battle Fury is in such a blind rage, that even when you character Shape Changes, it’s too late – once targeted by the Battle Fury, that attack is happening, even if you’ve turned into his dear Aunt Petunia.

Energy Explosion – the attack itself is now a “no damage” attack, though it still deals damage based on the number of times each target (and adjacent character) is hit. As a “no damage” attack, a critical miss while using this power will no longer cause the attacker to take damage. It would normally also mean that a critical hit would not increase the damage dealt, but the power continues to point out that you do.

Shape Change – this is another one of those powers that has been tweaked over time trying to get the wording “just right”. While it originally would allow for a given action to be redone, this would lead to inevitable confusions – what if my character is in the middle of a Running Shot, can it redo its entire move? What if it’s a Hypersonic Speed character, can it move some more and then make the attack? Now, Shape Change clearly states that what happens is that the current attack cannot target the Shape Changer. The attack proceeds, if possible, and the attacker can choose an alternate target, but cannot change any other actions or remake any other decisions except the target.

Leadership – Of the powers out there that were under-utilized in our game, Leadership is probably the number one (and, if your list varies, I suspect it’ll still land in the top three). It needed… more. So the good news is a successful roll for this power now allows the character with Leadership to remove an action token from an adjacent character (that is a lower point cost). The second piece of good news is that Leadership is cumulative now – if you have 3 Leaders, each one can roll for Leadership and each one can remove a token and add an action to your action pool for the turn. All of this good news, there has to be some bad news, right? There is. Leadership is now only successful on a 5-6. So it’s effective 17% less often, but when it IS effective, there’s a much nicer payoff.

Pulse Wave – I started with this under “medium modifications” because really, the way this power has changed is small. But I know that this changes so much when it comes to your Pulse Wave characters that I had to put it in here. The change? Pulse Wave, though it remains a ranged combat attack, can be activated while adjacent to an opposing character.  Even if you’re not a Sharpshooter, who could already pull off this trick.

Stealth – I would argue that this is the power folks have been waiting to hear how exactly it’s being worded since I plugged its change in the first preview.  The full text is: “When it is not your turn, hindered lines of fire drawn to this character are blocked.” Yes, this means that when Batman attacks, the opponent can cause him to reroll with Probability Control. Except for a small number of corner cases, the only practical difference with this power involves Probability Control.

But let’s talk flavor for second.  When it’s your turn, your character is moving about, taking actions, and both you and opponents should know where that character is.  And when it’s not your turn and your stealthy character is hiding, no one should know where that character is.  With the old wording, you could “step out of the shadows” for a moment so your friends across the board could see you, but an opponent two squares away would somehow not be able to see you and know where you were.  So the flavor disconnect with the old stealth felt pretty large when we examined it.

We needed to remove “canceling” but preserve the essence of Stealth and make it as simple as possible, and the above wording is where we settled.  Stealth has always been one of the more powerful PAC powers, and the slight downgrade it gets from both players being able to see the character on your turn to use Probability Control is plenty justified on a flavor, point, and utility basis.

Telekinesis – I have been deliberately sequencing these lists in alphabetical order because Telekinesis needed to go last. It’s the power with the biggest change to it, hands down. To be fair, it’s also one of the powers that had a significant amount of mechanics that were not very intuitive. The two biggest challenges we found in explaining TK to new players was the idea that the target character was “moving” (and should therefore follow rules of movement) and that the target character therefore also had to break away in order to be TK’d. But only if it was friendly. And Hypersonic Speed, Phasing/Teleport, and Leap/Climb wouldn’t help. But Plasticity would. It was all consistent, but it was also “not intuitive.”

Give this character a power action and designate a target character or object (A) and a destination square (B). This part is simple enough, although the “A” and “B” designations are new. In order to allow the power to be phrased more succinctly, we are using these designations. The key to remember is that A is either a character or an object while B is a square.

This character, A, and B must all be within 8 squares and line of fire of each other. This is only slightly different than the rules we currently have. Right now, the target does not need line of fire to the destination. This is a change with the 2011 rulebook and was easily one of the longest threads on our discussion board. The long and short of it is this – the flexibility given to TK from its original version (which required adjacency with the target being moved) needed to be balanced by something when TK changed to allow the extended range. Originally, that was balanced by requiring break away and forcing movement, but by removing that  something else needed to be used to introduce balance. Forcing the line of fire between the two endpoints felt that it would remain flavorful to the power and maintain the all-important balance to the game.

Place A in B. There is a deliberate decision to use the word “place” here. The 2011 rulebook makes it clear that placing is something that does not require breaking away.

If A is a character, it must be a single base character and possess the [explosion] symbol. This is also a slight hit to TK as you can no longer TK friendly [giant] (or [colossal]) characters.

If A is an opposing character, make a close or ranged combat attack that deals no damage against A, and only place the character in B if the target is hit. This line has TK working against opposing characters exactly as it does now.

Let’s take a look at this in action: 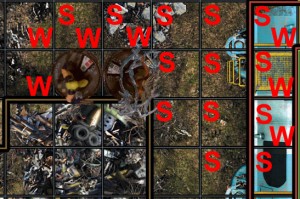 This marks a departure from how TK has worked for quite some time. The principle that “the TK’d character doesn’t block the line of fire of the TKer” is no longer the case.

The changes to TK were among the ones most argued during the testing process. Design and testing went back and forth on many different versions walking a careful line between “easier to intuit” and “balanced”. There is certain to be discussion as to whether the line of fire requirements are too substantial a hit to TK for the benefits of removing the complexity of moving and breaking away.

We hope you’ve enjoyed the previews and the new rulebook and PAC (links below). Over the coming weeks, as questions come up (you do know to send questions and comments to HeroClixRules@gmail.com, right?) we will follow up with more detailed explanations here to ensure you can enjoy your favorite game consistently with other players around the world.

You can also listen in on a rules-oriented ClixCast by listening to episode #80, which should be available around noon (click HERE for more info).