On the Road: Amazons and Avengers

If you’re anything like me, one of the things you love about attending conventions is all the really cool swag you find at the different booths and WizKids is no exception! Over the years WizKids has offered some really cool figures and we’re happy to say this year will be no different!

You’ve already heard about the Horsemen of Apocalypse which will premiere at Origins, well, we don’t want our GenCon fans to feel left out so we’re very pleased to present two figures that will first be available at GenCon!

First up we have none other than the most manipulative (Dark) Avenger, Moonstone! 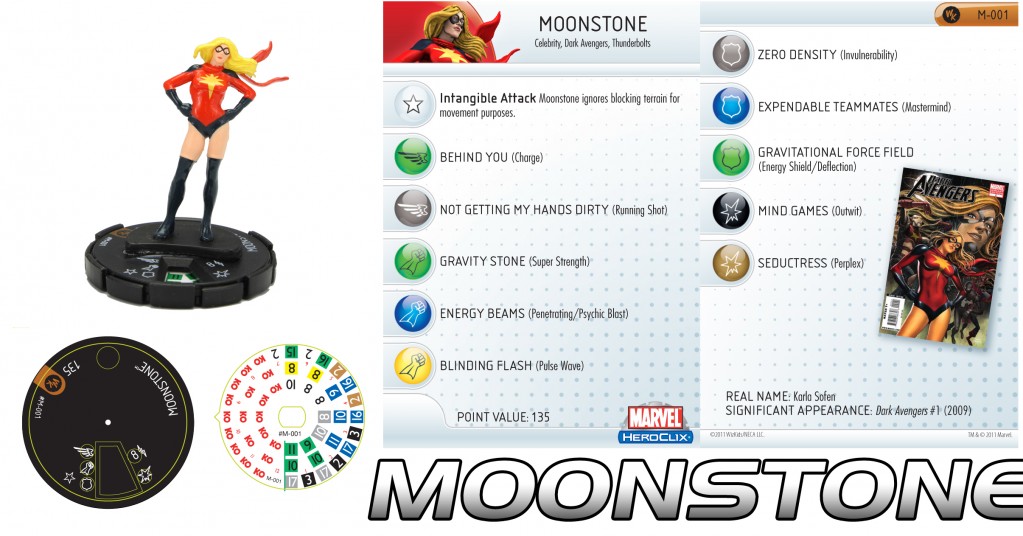 Moonstone brings a host of useful abilities to your Dark Avengers lineup, not least of which is her Trait.  The ability to ignore blocking terrain while moving mimics her intangibility as Moonstone manuevers into position for maximum effectiveness.  Combine her Intangible Attack Trait with her Charge and Running Shot powers and Moonstone can attack her opponents with little concern for terrain.

Front loaded Outwit and Super Strength give way to Penetrating/Psychic Blast and eventually Perplex.  Invulnerability becomes Mastermind and then Energy Shield/Deflection as Moonstone shifts from a high-density defense to bravely manuevering her allies between her and her foes.  Pulse Wave on Moonstone’s late-dial repesents her omnidirectional blasts as she attempts to get to a safer vantage point.

Moonstone is an excellent addition to your force at 135 points whether you’re playing Dark Avengers, Thunderbolts, or any team designed to maximize her strengths.  However, Moonstone isn’t the only figure premiering at GenCon!

Next up we have Wonder Woman! 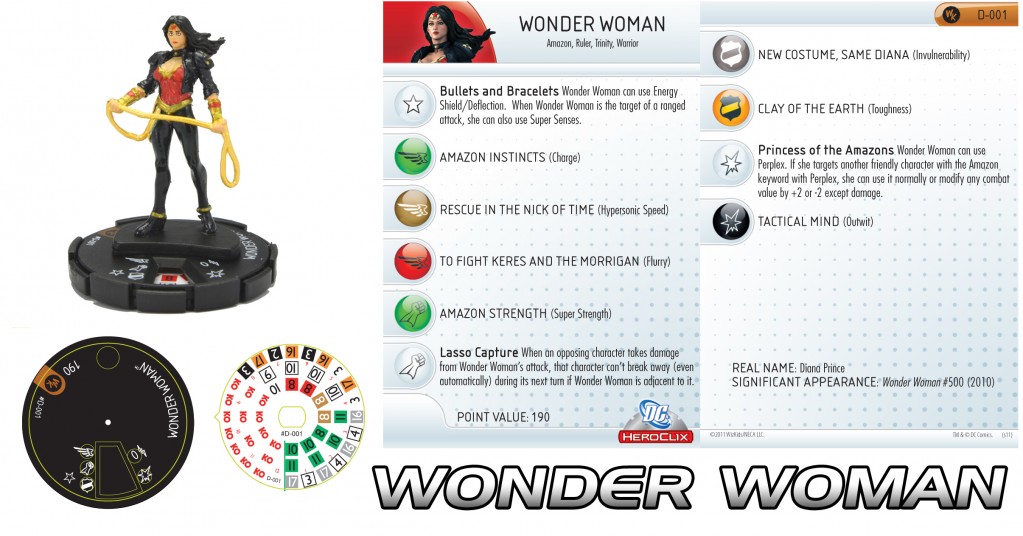 The first thing you’ll notice is we’ve gone in a new direction for the Amazon Princess to match the new costume and direction Wonder Woman’s book has taken in the last year.   However, all the strength and tenacity you’ve come to expect from Diana is there regardless of her wardrobe!

First off, let’s look at that Trait; Bullets and Bracelets provides Diana with  incredible protection against ranged attacks! Energy Shield/Deflection as well as Super Senses all but ensures frustration for your opponents unless they’re willing to move into close combat with Wonder Woman.

Watch out though, like all Amazons Wonder Woman is an expert hand-to-hand combatant as well! Front-loaded Charge and Super Strength are a familiar combination for Wonder Woman but mid-dial Diana moves into Hypersonic Speed and her Lasso Capture special power which prevents any opposing figure from breaking away from adjacency if Wonder Woman damaged them with an attack.  Hypersonic Speed eventually gives way to Flurry as Wonder Woman switches tactics against her opponents.

And let’s not ignore Wonder Woman’s Princess of the Amazons special power! Perplex is always useful but when Diana targets another Amazon she can increase any combat value (except damage-she is an ambassador for peace after all!) by +2 instead.  Late-dial Outwit also means that Wonder Woman is an excellent choice for the Brilliant Tactician feat, and let’s not overlook the Indomitable ability on Wonder Woman as well!

We hope you’ve enjoyed these previews as much as we have.  Again, GenCon will be the first opportunity for HeroClix fans to win these exciting pieces, but like the Horsemen we will be announcing other ways these figures will become available  before the end of the year.

Be sure to join us on Monday as begin another exciting series of HeroClix previews.  Until then keep your figures off their K.O. clix!