Spring time, spring time! I got to enjoy the transition weeks with my cozy denim jacket and now, I can enjoy short sleeves and no jackets. My wife and I can take long walks around or neighborhood. And my inbox gets half a dozen emails a day wondering when we will announce the changes to the Modern Age environment.

Well, today is the day. The new Modern Age formats take effect 5/15/2011. You can jump to the end of the article for links to the new Comprehensive Tournament Rules, if you are so inclined. That document lists the sets that remain in Modern Age on page 5. If a figure has a set symbol from one of those sets, it’s Modern. All other figures from all other sets are classified as Golden Age.

For those staying with us for the whole article, why don’t we take a moment to remember the good times the sets rolling into Golden Age gave us.

Avengers was the first booster release to include special powers and HeroClix was never the same again. Arguably, one of the most popular characters from that set got by with a standard set of powers. Scarlet Witch was a staple on many teams, including last year’s World Champion, George Massu. 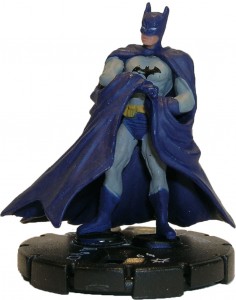 While DC received special powers at the same time as Marvel with the Legion of Superheroes Collector’s Set, Justice League brought the mechanic to a whole new level. The first figure in this set is most commonly known by his special power, Out of the Shadows Batman (or OotS Batman). While Avengers dipped its toe in the waters of special powers, this character demonstrated just how radical special powers could change things. No character was safe unless you managed to keep it 6 squares away from ALL hindering terrain.

In retrospect, Mutations and Monsters almost appears like the calm in the center of the storm. It remains one of my most favorite sets to play in the sealed format and Green Scar here is likely one of the reasons why. Sometimes, it seemed like if I was going to play sealed, this Hulk would decide to hide away in one of my boosters. Ten clicks long and damage never dropping below a 3. It almost didn’t even matter who else was in the booster – anything that got me closer to the 300 point build total. Whichever figures he was teamed up with, I always just called them “fodder”. They got in the opponent’s way as Green Scar came in for the kill. 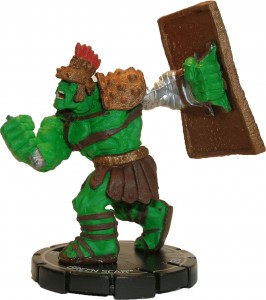 Crisis is the title that DC Comics uses for a comic series that’s going to be huge, so it was a well chosen name for this set. What was more controversial? The reintroduction of chase figures, like Superman here or the challenge people had trying to get as many of their brick redemptions in the mail to get one of the limited 5,000 pieces of World’s Finest. With all the attention on those hard-to-get pieces, one almost loses sight of the fantastically fun characters in this set to play. A full squad of Metal Men. Tournament caliber pieces like Karate Kid and the Chief. Tent pole characters like Darkseid, Black Adam, and the Spectre!

Now, as we say farewell to these four fun sets, Modern Age continues to grow. From last year alone we have 6 sets and with Captain America just around the corner, it looks like Modern Age will be filling in the gaps pretty quickly!

Since uncarded characters were first assigned keywords, there has been controversy. I would like to announce that the revised keyword document eliminates all controversy and that players will regale all of the decisions made in revising this document. Really, I’d LOVE to say that. But I’m a realist.

With GenCon fast approaching, we knew it was important for this document to have an official home in the downloads section of the website. We also knew that some things just had to change, if for no other reason, but because errata exists indicating so. But a few other things had to change as well: 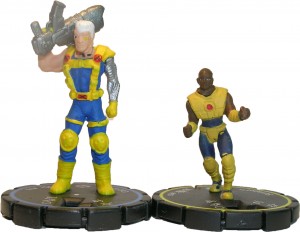