Today we continue our exploration of the Green Lantern gravity feed figures and I can’t think of anyone better to spotlight than two GL’s who have devoted themselves to the efficient and effective operation of the Corps.  Without further adieu, let’s start with Salaak! 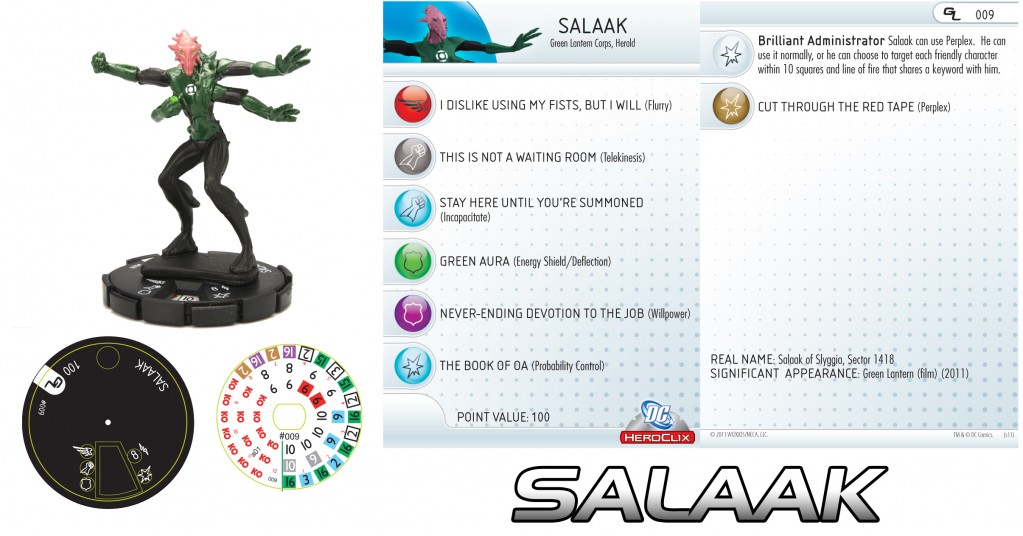 At 100 points, Salaak is an excellent addition to your Green Lantern teams.  His consistent combat values and power selection ensure that he is useful no matter where he lands on his dial!  Pair Probability Control with Telekinesis on the early dial and Salaak is able to manuever the other Green Lanterns on your force to where they’ll do the most good, and use his Probability Control to ensure they hit!

But that’s not all! Salaak’s Probability Control eventually gives way to his Brilliant Administrator special power which allows him to use Perplex normally, or he can target everyone he shares a Keyword with so long as they’re within 10 squares and line of fire!

Energy Shield/Deflection helps to keep Salaak safe from ranged attacks for most of his clix, and he picks up both Willpower and standard Perplex on his late-dial which ensures he remains useful until the end.  However, if you want proper protection for  Salaak, we can’t think of anyone better than his peer Kilowog! 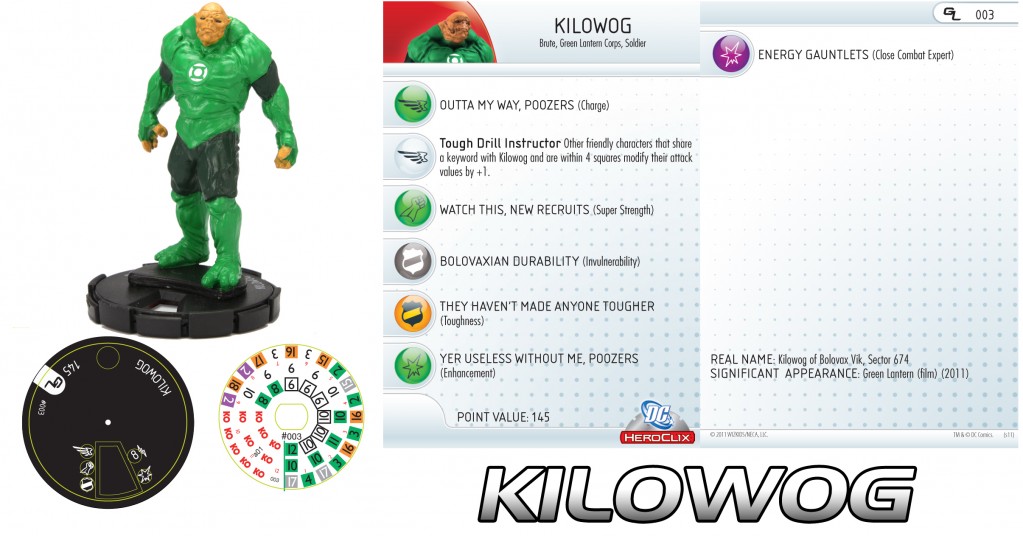 At 145 points, Kilowog brings a host of useful powers to any Green Lantern force! Aggressive combat values make Kilowog an effective fighting piece for your GL squad, and his combintion of support and offensive powers make him an incredible asset no matter who he’s fighting alongside!

As one may expect, Kilowog starts off with Charge with Super Strength so that he can get right in the thick of battle and carry an object while he’s at it.  That’s not all though! Front loaded Enhancement means that if you position just right (and Kilowog’s buddy Salaak may be useful there!) you can fire off some shots with your other Green Lanterns for added damage so long as they are adjacent to Kilowog when they do so!

Charge gives way to Kilowog’s Tough Drill Instructor special power which enables him to modify the attack value of any friendly figures sharing a keyword with him within 4 squares by +1! Combine that with the aforementioned Enhancement and Kilowog proves why he is the senior instructor of all rookie Green Lanterns!

Invulnerability and Toughness througout his entire dial keep Kilowog in the fight while Super Strength eventully gives way to Close Combat Expert.  Add in Kilowog’s Indomitable ability and no matter how you slice it, Kilowog is here for a fight and ready to dish out some hurt on behalf of the Green Lantern Corps!

That’s all we have for today, but be sure to join us oon Monday for even more Green Lantern goodnessas we check in with Sector’s 0000 and 1414! Until then, keep that emerald light shining!