From Sector 0000 to Sector 1414! Checking in with the Green Lanterns and the Guardians

We continue our Green Lantern gravity feed previews with aquick tour of Sector 1414, and who better to show us around than the GL assigned to that Sector, Boodikka! 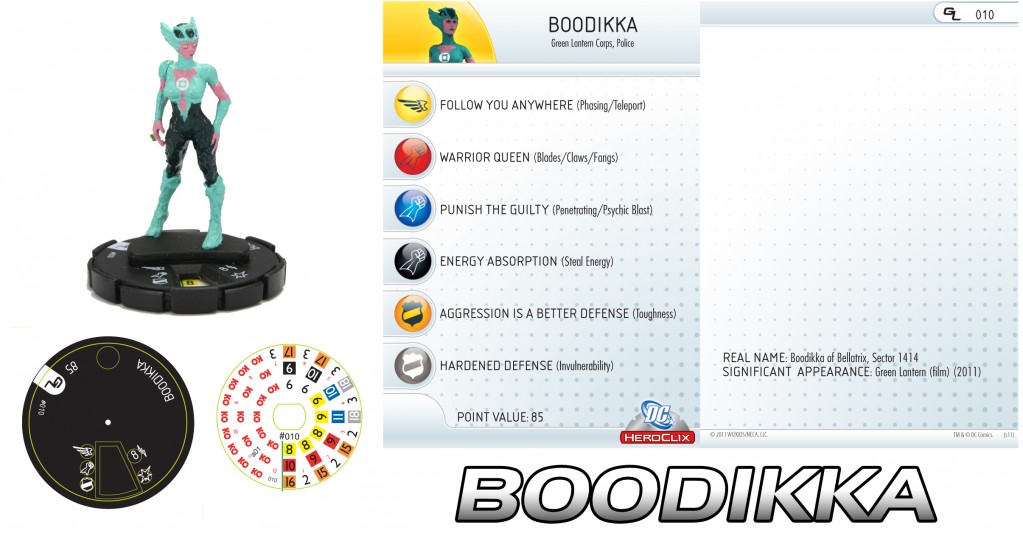 A you can see, Boodikka is a pretty potent package at only 85 points.  Phasing/Teleport throughout most of her dial allows her to manuever where she’ll do the most good while Blades/Claws/Fangs gives her some pretty good damage potential once she’s in position! She switches from melee tactics about half way through her dial in favor of ranged attacks and picks up Penetrating/Psychic Blast while trading in her Toughness for Invulnerability!  Late-dial Steal Energy allows her to potentially stay in the fight longer and the Indomitable ability throughout her dial ensures that she will go keep on swinging while enemies are standing!

With a good variety of attack powers and very consistent combat values, Boodikka is an excellent secondary attacker for any force! Pair her up with our next figure and she could be the perfect harrasser for protecting your Ganthet! 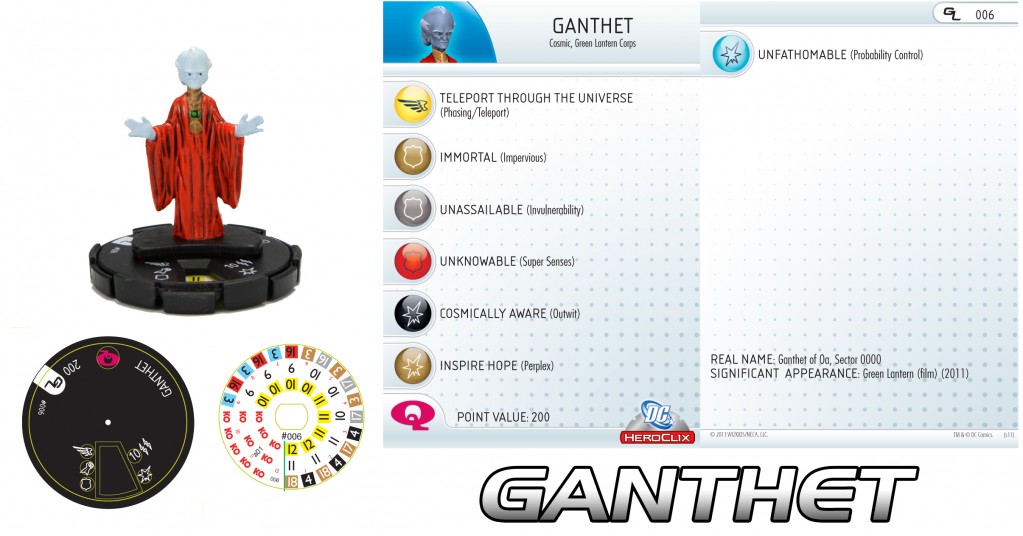 The Guardians of Oa are among the oldest and most powerful beings in the DCU, and Ganthet here does not disappoint! At 200 points, Ganthet brings a host of useful powers and demonstrates just why the Guardians are so respected.

Immunity to Outwit and the option to act without fear of pushing damage via the Quintessence team ability is just the tip of this iceberg! Like many of his Green Lanterns, Ganthet possesses Phasing/Teleport allowing him to move to where he’s most needed without the need to breakaway, and early-dial Outwit means that he’ll definitely be a concern for your opponents!

Outwit gives way to Perplex while Ganthet trades in his Impervious for Invulnerability.  Ganthet retains his consistent (and aggressive) combat values throughout his dial and the ability to target up to two opposing characters from 10 squares away means that he can mix it up with the best of them without putting himself in harm’s way (the Guardians do like to affect events from a distance after all).  Late-dial Probability Control ensures Ganthet will always be able to play a role in your battles, and Super Senses will give him a chance to evade attacks altogether should your opponent manage to attack him!

We hope you’ve enjoyed today’s previews.  Be sure to check in with us on Wednesday as we continue our tour of the galaxy with Sectors 0700 and 2813! Until then, keep your figures off their K.O. clix!